The play itself, as staged in a nationally touring production, requires no additional feting. Based on Mark Haddon’s bestselling novel, The Curious Incident of the Dog in the Night-Time follows 15-year-old Christopher, a special-needs child who discovers the body of his neighbor’s dog and commences an investigation. 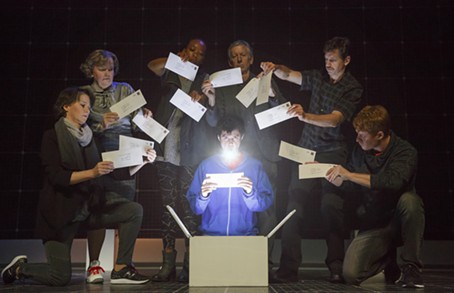 Photo courtesy of Joan Marcus
Adam Langdon (center) in "The Curious Incident of the Dog in the Night-Time"
Unmasking the killer, however, is only half of the story. There are no traditional props or storytelling techniques on display. The action, which unfolds in front of a massively creative, interactive set that resembles graph paper, is propelled by the incredible work of the ensemble cast, led by the performances of Maria Elena Ramirez as Christopher’s patient teacher; Gene Gillette as Christopher’s devoted father; and Adam Langdon as Christopher. (Enough cannot be said about the Langdon’s extraordinary physical performance. At one point he literally walks along the walls.)

The show sold out its original runs at the UK National Theatre and at The Gielgud in London’s fabled West End. When it finally exploded onto Broadway, it earned its creative team multiple Tony awards, including best play for Simon Stephens; a best director for Marianne Elliott; and best lighting and scenic design for Paule Constable, Bunny Christie, and Finn Ross. The U.S. tour, produced by the National Theatre, has been brought to Pittsburgh by the Pittsburgh Cultural Trust as part of the PNC Broadway in Pittsburgh series.

So, yes, the show is very good, and fulfills its own hype. More importantly, though, is why you should rush out and buy tickets before it leaves town on Jan. 8.

The last time I was in New York, I bought two of the cheapest tickets I could afford to a Broadway show, real nosebleeders, and I paid around $200. By contrast, in Pittsburgh you can still find two balcony-level seats for this Saturday night's performance for less than $100. You’re likely to pay out nearly as much at the multiplex for two Imax tickets plus popcorn and soda. Skip the post-movie bellyache; not only will you be witness to one of the most unique stage productions to come along in years, the romantic experience of the night promises to be enhanced exponentially by the pomp of Heinz Hall.

Tags: The Curious Incident of the Dog in the Night-Time , National Theatre , Heinz Hall , PNC Broadway in Pittsburgh , Image

Ringo Starr and his All-Starr Photographers