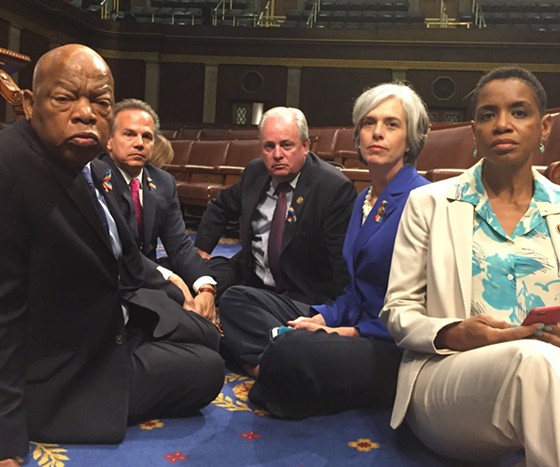 Photo courtesy of Mike Doyle's Twitter account
Representative Mike Doyle (center) with other House Democrats during June sit-in
At a closed-door meeting on Jan. 2, U.S. House Republicans met to decide on what their first action would be when the 115th U.S. Congress was sworn into session the next day. By a 119-74 vote, House GOP-ers decided that first issue would be to change the independent Office of Congressional Ethics and place it under the House Ethics committee, which is run by lawmakers.

The lone Southwestern Pennsylvania Democrat, Mike Doyle (D-Swissvale), was not pleased. He wrote in a tweet: “The first action the House GOP is taking in the new Congress is a rule to gut the independent Office of Congressional Ethics....”

The next day, the decision to move the ethics office was scrapped, due to a flood of calls from constituents critical of the decision, and even a tweet from President-elect Trump indicating this decision shouldn’t be a high priority.

Among Southwestern Pa. GOP reps, only Kelly voted to move the office initially, but all three have stated they dislike the office and it should be reworked. The Office of Congressional Ethics is an independent, nonpartisan office made up of ethics lawyers and other professionals who investigate the conduct of House representatives. The office was established in 2008 after several corruption scandals among representatives.

As reported in the Pittsburgh Post-Gazette, both Kelly and Rothfus said that ethics violations could be policed by a bipartisan panel of House representatives. The reps are also critical that the OCE publicly announces that lawmakers are under investigation.

“I opposed the inclusion of the [ethics office] measure,” wrote Rothfus in an email to City Paper. “This is an issue that there have been bipartisan concerns about, and I think there should be a bipartisan resolution to it.”

Rep. Murphy tweeted this about the ethics board: “I voted NO last night but let’s be clear→ #bipartisan agreement #OCE is broken, secretive, lacking #dueprocess & used for political purposes.”

But the watchdog group Citizens for Responsibility and Ethics in Washington says the office should remain. “OCE is one of the outstanding ethics accomplishments of the House of Representatives,” said CREW in a statement, “and it has played a critical role in seeing that the congressional ethics process is no longer viewed as merely a means to sweep problems under the rug.”

Although the ethics-office move was scrapped, there is still a proposed rule change that the GOP wrote. That change penalizes representatives for recording, live-streaming or taking photographs of action on the House floor. Only C-SPAN is allowed to broadcast live; there are no current enforcement guidelines on members' recording or live-streaming. This proposed rule was inspired following a June sit-in on the House floor by Democrats who had grown frustrated by reluctance to hold a vote on gun-control legislation following the Orlando mass shooting.

In the P-G, Rothfus said he was prevented from giving a speech the day of the sit-in in June and that “we need to have rules that can be enforced so members will respect each other.”

On Jan. 3, Doyle tweeted in response to the recording rule: “GOP’s trying to muzzle the American People’s representatives with unconstitutional, unnecessary rule to kill free speech on the House Floor.”

Pittsburgh Steelers wrap up the regular season with win against Cleveland