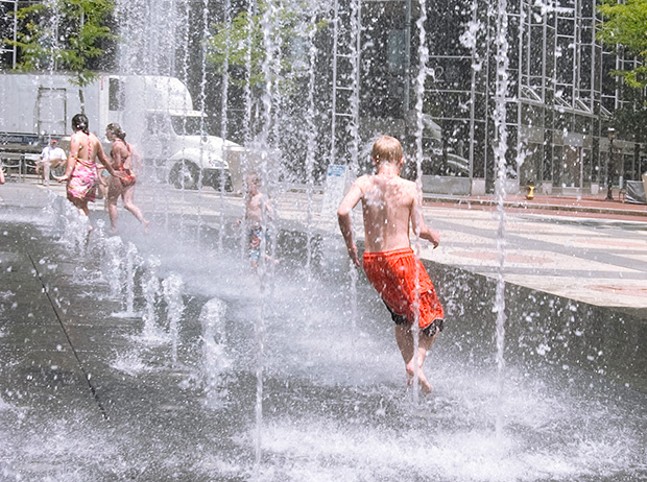 Kids cooling off in Downtown Pittsburgh
On July 4, a massive storm rolled over Pittsburgh and brought a deluge of water and booming thunderclaps. Initially, the rain was welcomed as temperatures were spiking above the nineties and the humidity was palpable.

But, the storm led to many power outages across East End neighborhoods, Fox Chapel and Penn Hills. They came at the worst time. The rain passed through and the heat returned. About 20,000 homes were sweltering without any electricity to power air conditioners or fans. The power outages lasted several hours, with some homes without power for more than a day.

Costa Samaras of Carnegie Mellon University says expect this scenario to be replicated with increasing frequency thanks to climate change.

“As temperatures get hotter, we will have more of these events,” says Samaras, who directs CMU’s Center for Engineering and Resilience for Climate Adaptation.

As the climate warms, our summers temperatures are spiking. And with an abundance of fresh water, especially in the Eastern portion of the U.S., warmer summers mean more humidity rising into the atmosphere. With more humidity and heat, comes more strong storms. As those storms continue to pummel places like Pittsburgh, expect more downed power lines, floods, and then power outages.

Sensitive populations, like the elderly, are the most threatened during heat-wave power outages. Samaras says for some residents, heat waves without electricity to cool down can be fatal.

No deaths have been reported in Pittsburgh in relation to the recent heat wave, but Quebec, Canada has lost 33 lives thanks to a recent heat wave. More than 15,000 people lost power in Quebec as the heat wave raged.

In additions to storms, Samaras says intense heat places pressure on the power grid, since so many people are staying inside and running fans or air conditioners. That can lead to brownouts.

“It is hard to design a system that is going to deal with that,” says Samaras.

Green buildings that power themselves also take pressure off the power grid and aren’t susceptible to power outages. More cooling centers could be built in Pittsburgh so sensitive populations can avoid sweltering inside their homes.

But most off all, Samaras says reducing emissions will help in making sure heat waves and thunderous storms are less frequent.