Behind the mask: Meet one of Pittsburgh's popular furries | Blogh

A screencap from Rika and Vix's YouTube channel
Her colorful blue head was sitting on a table and looking up at me smiling when I met Rika inside Downtown Pittsburgh's "Furryland" last week.

Rika is a furry. A blue Arctic fox, to be exact. She answered our call for local furries and graciously agreed to be photographed for our story on Anthrocon.

Rika, who also goes by "Vix N dwnq," prefers not to reveal her real name or say which neighborhood she lives in because she has a lot of fans she loves and appreciates - but she doesn't want them showing up unexpectedly at her front door.

Underneath the costume, Rika is a thin, cute 24-year-old. She speaks softly, but confidently, taking time to think over questions before she answers. She arrived at our photo shoot already dressed in costume and carrying her head. When she puts the fox head on, she gets into character right away: her voice gets higher and she waves, easily posing for the camera. A born furry model. 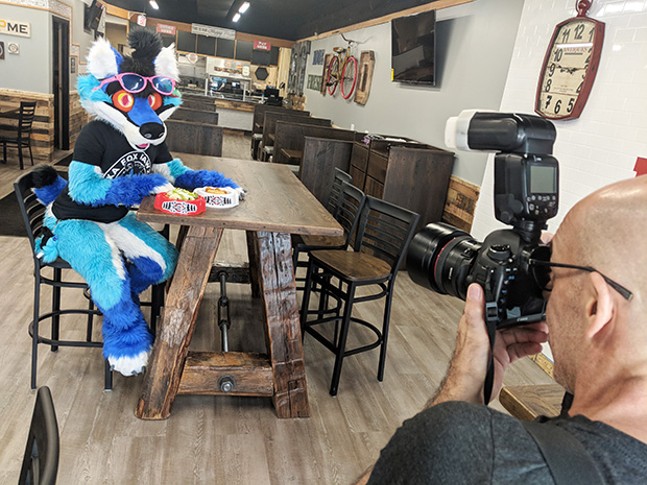 CP photo by Lisa Cunningham
Behind the scenes: Photographer John Colombo poses Rika in Furryland
Her first Anthrocon was in 2011, but she didn't identify as a furry until 2014. Since then, she's gotten local fame for her furry-themed artwork and her YouTube channel, which she said is the first furry-exclusive content channel to reach 100,000 subscribers. (She currently has 126,582.) On it, she records herself walking around in her fursuit, talking to the camera both in and out of character, and incorporates her original art into the videos.

Some of the best involve Vix (out of suit) talking with an animated version of Rika (in suit) together. Each video starts off with a high-pitched, cheerful "Boop boop!" It's adorable.

But her YouTube channel doesn't shy away from heavy topics, either. In a video last month that currently has over 20,000 views, she came out as asexual to her fans.

"I have people of all ages and gender identities come to me online and at cons to tell me how much I inspire them," Rika says in an email. "Some people have said I've saved their lives or made them feel welcome somewhere and that is always heartwarming to hear."

In another video that's a must-see for fans coming to Anthrocon this week, she teaches fans not to assume that all furries want to be touched or hugged.

Rika told us she has never been inappropriately touched while in her suit in Pittsburgh, even though she's been dressing in fursuits for years, including during Anthrocon, Pride, Arts Fest and other holidays.

But she wants people not to assume. For furries who want to head off unwanted touches, she sells a "Stop! Please Do Not Hug without permission" T-shirt.

She also designs characters, stickers and trading cards for other furries and herself, which she'll be passing out this weekend at Anthrocon. Plus, she made part of her own fursuit. Her friend made the body to her specs, and she commissioned the head, but she crafted the feet and hands.

A lot of furries on Twitter were shocked to see her holding a slice of pizza with her furry paws for the photo that ran with the article. Yes, pizza sauce did get on the fur. But Rika has a tip.

"Folex! I clean the stained area with Folex carpet cleaner and then wash them in the washing machine. Cold, hand wash, no dryer. Comes right out!"