What can Pittsburgh, by itself, do on climate? 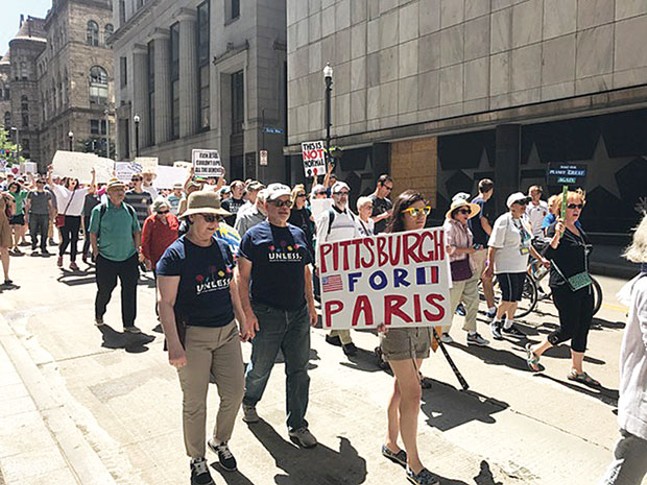 On June 1, President Donald Trump made headlines worldwide by withdrawing the U.S. from the historic Paris climate accord, a deal widely considered crucial for mitigating global warming; Trump said he’d been elected to “represent … Pittsburgh, not Paris.”

Then, Pittsburgh Mayor Bill Peduto made his own international headlines by rejecting the idea that Trump represents Pittsburgh, and joined dozens of U.S. mayors and governors who vowed to fulfill the commitment to 2015’s Paris Agreement themselves, cutting U.S. greenhouse-gas emissions to 26 percent below 2005 levels by 2025.

Peduto’s defiance prefaced a rousing June 3 speech to the impressive crowd of 800 who’d rallied in Market Square during that day’s MarchforTruth. “In Pittsburgh, we say Pittsburgh and Paris,” said Peduto, who was among the mayors who’d gone to Paris to push for the accord. “We are all on this planet together.”

Cities are massive users of fossil fuels. They’re also especially vulnerable to heat waves (all that concrete) and, so many being coastal, they’re unusually prone to flooding, extreme weather and other risks of global warming. But given that so much climate action has been federally driven — from the Paris Agreement to President Obama’s Clean Power Plan, now similarly imperiled under Trump — how much can mere cities do to address civilization’s biggest challenge? Even when the pro-Paris side, according to www.wearestillin.com, now boasts 200 cities and counties, nine states, hundreds of colleges and universities, and hundreds of businesses (including megacorps) and investors? And even with bankrolled buy-in from billionaire Michael Bloomberg?

Pittsburgh’s climate goals, per Peduto’s June 2 executive order, include: moving municipal operations to 100 percent renewable electricity; 100 percent diversion of waste from landfills (because trash = wasted energy); and halving energy consumption citywide, all by 2030. Pittsburgh, like other cities, is in fact already pursuing such goals, with strategies like switching to LED streetlights and retrofitting municipal buildings for energy efficiency. Through the long-running Western Pennsylvania Energy Consortium, Pittsburgh and other municipalities and nonprofits jointly purchase electricity whose portion of renewables keeps growing — it’s now 35 percent, says Grant Ervin, the city’s chief resilience officer. Independent but allied initiatives include the Green Building Alliance’s 2030 District, which aims to get building-owners (for now mostly Downtown and in Oakland) to cut energy use, water consumption and transportation emissions in half by 2030; the project’s nearly 500 buildings have reduced collective energy use by 10.7 percent.

But just as Paris was only a down payment on the fossil-free-fuel world we need, Pittsburgh must do more. “We can’t wait for the feds,” says Court Gould, executive director of nonprofit Sustainable Pittsburgh. Ervin says Pittsburgh is working on everything from speeding up energy retrofits for buildings to spurring more locally produced clean energy (community-based solar, for example) and expanding public transit (for instance, the Bus Rapid Transit proposal). Gould cites proposals to deploy micro-hydro power plants on the rivers here, even in sewers.

And renewables, like wind and solar, are becoming more accessible. “Clean solutions are getting very close to cost-competitive,” says Neil Donahue, a Carnegie Mellon University professor of engineering and public policy. Cities can exploit the inherent energy efficiency of being densely built, with smaller living spaces and shorter trips. California now gets 27 percent of its electricity from renewables; San Francisco, using an innovative energy-buying plan, is at 44 percent citywide.

Still, even “deep, rapid emissions reductions” by all U.S. cities would get the U.S. only one-third of the way to its Paris goal, according to international urban-climate group C40. And with the White House in Republican hands, helpful things like federal tax credits for renewable energy, rising gas-mileage standards, and federal funding for transit and other infrastructure might be scarcer.

Having a climate-denier in the White House, in other words, will still hurt.

“We’ll all have to work a little harder and be a little more creative … to move the country off fossil fuels,” says Adam Garber, field director of nonprofit PennEnvironment.

But Gould remains optimistic. “It will slow down our progress,” he says. “It’s not gonna stop it.”