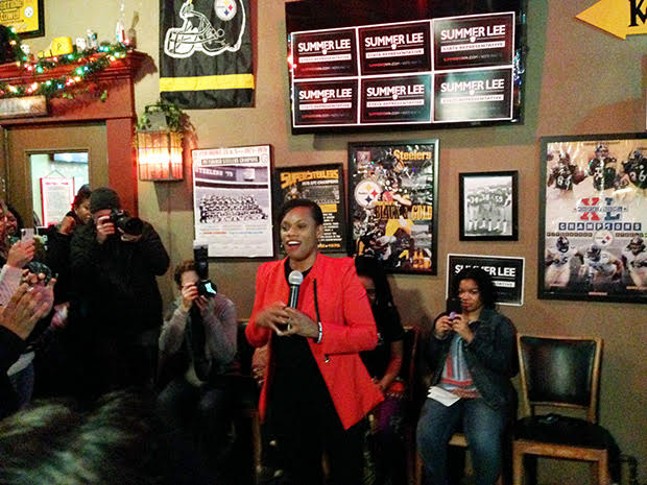 “A lot of people don’t know this, but Martin Luther King was a radical,” said Lee. “He called for an end to capitalism. He wanted to unite poor people. He knew that if we can’t end that system, we would fail in our goals.”

King, after the passage of the Civil Rights Act, in 1964, and the Voting Rights Act, in 1965, began to campaign against the effects that capitalism had on poor people of all races and backgrounds. In a 1967 speech, King said, “When machines and computers, profit motives and property rights are considered more important than people, the giant triplets of racism, materialism and militarism are incapable of being conquered.”

Lee is running as a Democrat in the primary election against incumbent Paul Costa (D-Braddock), whose Pennsylvania state House District 34 encompasses towns like North Braddock, Swissvale, Forest Hills and other nearby boroughs.

Lee has been endorsed by the Pittsburgh chapter of the Democratic Socialists of America and she championed many of the group’s preferred policies at her campaign kickoff event in Braddock. She told the crowd she will support an agenda that includes “health care for all” and raising the minimum wage, if elected. In the past, she has worked in the Fight for $15 movement. And while Lee worked as an organizer with the Hillary Clinton campaign in 2016, she has embraced her endorsement by the DSA, an ally of Sen. Bernie Sanders (I-Vermont).

Lee, a Howard University grad and North Braddock native, said she would focus on equitable school funding, as a way to improve the prospects of students at underperforming schools. A Lee supporter, Wilkinsburg School District member Klara Brown told Pittsburgh City Paper that equitable school funding was one reason she is enthusiastically supporting Lee. Also, Lee touted her experience as an organizer for Woodland Hills school-board races, and said that Harrisburg needs to focus funding priorities away from prisons and toward education.

“We need to end the school-to-prison pipeline,” said Lee. “All the money we spend on prisons could easily go to our children.”

“When I met Summer [Lee], I was impressed by her leadership and how she already knew the political system,” said Doose. “Our communities need young leaders.”

Lee is 30 years old, and her campaign event was filled with younger attendees. Two Woodland Hills High School students even spoke in support of Lee. Garrett said to the crowd, “The youth are out here tonight.”

The primary election will be held on May 15 and the last day to register is April 16.