Some of Pittsburgh’s Republican suburbs are turning blue | Blogh 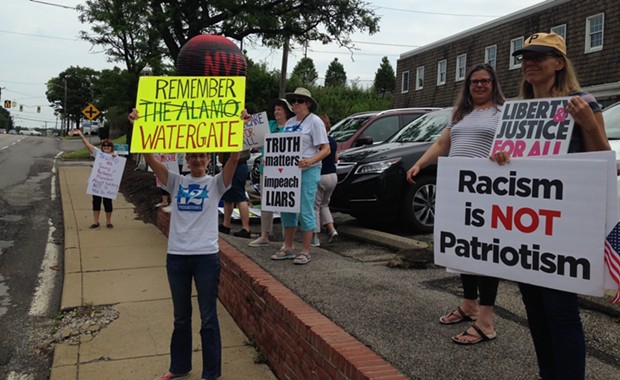 CP photo by Ryan Deto
Protesters gather outside of Republican U.S. Rep. Keith Rothfus' office in Ross Township in July.
The 2017 general elections saw some remarkable wins for local Democrats and progressives. In Allegheny County, the Pittsburgh chapter of Democratic Socialists of America saw both of its endorsed candidates, Anita Prizio for county council and Mik Pappas for magisterial judge, pull off victories. In Philadelphia, a Black Lives Matter ally, Larry Krasner, won the race for the city’s district attorney. And Tyler Titus was elected to the Erie school board, making him Pennsylvania’s first openly trans person to be elected to public office.

In statewide races, Republicans won some victories, too. For one, surprisingly, given upstart progressive wins elsewhere, Republican Sallie Mundy won a full term as state Supreme Court justice, and did so by winning in some unexpected places. For example, both Erie and Lackawanna counties sided with Mundy, despite historically leaning Democratic. And in Commonwealth Court, Republicans split the four open seats with Democrats.

In a conversation with City Paper on Twitter, Brandon McGinley, a Pittsburgh-based political writer published in many conservative publications, wrote, “It does seem notable, though, that reliably Dem Erie would vote GOP in a type of race that is usually more about party ID than actual issues."

However, Mundy lost in many wealthy suburbs where Republicans typically win, especially in off-year races that are more about party affiliation and turnout. For example, Mundy lost Delaware and Chester counties, longtime Republican strongholds.

And the Democratic shift in Allegheny County’s wealthy Republican suburbs didn't stop there.

In McCandless Township, Democrat Carolyn Schweiger flipped a Republican-held council seat. Two Democrats won commissioner seats in South Fayette, a township that backed U.S. Sen. Pat Toomey (R-Lehigh) with 56 percent of the vote in 2016. Democrats won two open supervisors seats in Moon, including defeating the incumbent president of the board of supervisors, a Republican.

Additionally, a CP analysis of voting numbers shows some pretty drastic shifts toward Democrats in towns that typically back Republicans. CP compared margins of victory in Allegheny County towns in the statewide races for Commonwealth Court to the 2016 U.S. Senate race, since all candidates in those races have minimal connections to the Pittsburgh area and didn't include party outsiders like President Donald Trump.

Moon Township, in Western Allegheny County, saw a nine-point Democratic swing by these metrics, while Upper St. Clair and Collier Township saw an 11-point change, though these towns still backed Republican statewide candidates overall in both 2016 and 2017.

In a Nov. 8 Facebook post, Upper St. Clair’s newly elected Democratic Commissioner C. Elise Logan wrote that the Democratic gains happened only because of grassroots work. “Dozens of you have spent the last several months volunteering for this campaign,” wrote Logan. “Door-knocking, phone banking, fundraising; you did it all. I am so happy to say that all of our hard work and persistence paid off. We won a decisive victory tonight and flipped a seat in a Republican stronghold from red to blue!”

And that Democratic energy may not have long to wait to strike again. On March 13, voters in Collier, Moon, Upper St. Clair and other parts of Pennsylvania's 18th Congressional District, will choose a new U.S. Representative to replace Tim Murphy (R-Upper St. Clair), who recently resigned amidst scandal. 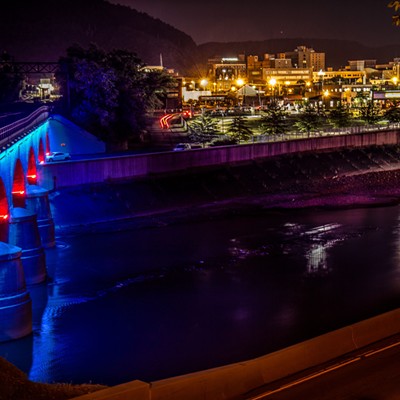