Just four performances remain for this stunner of a show, getting its Pittsburgh premiere at The REP. 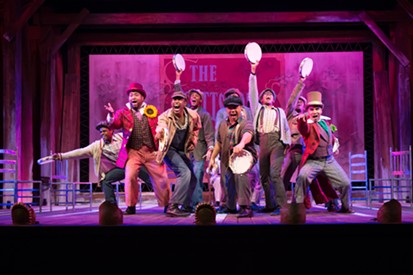 Photo courtesy of John Altdorfer
The cast of "The Scottsboro Boys" at The REP
It’s the story of an infamous miscarriage of justice — nine black boys and young men in the Jim Crow South who served years in jail for a rape that never happened — told as if it were a minstrel show.

But there’s more to this 2010 musical from Kander & Ebb (Cabaret, Chicago) than that stinging irony. Almost the entire cast re-enacting the story at the Pittsburgh Playhouse, including all the actors playing the “boys” and the stock minstrel figures Mr. Tambo and Mr. Bones, are black. So black actors portray not only black characters, but also most of the story’s white roles, including various cops and lawyers and even the two women who leveled the rape accusation.

In the hands of director and choreographer Tomé Cousin and this splendid cast, all that means not only some thoroughly entertaining theatricality, but also a wicked lampoon of white supremacy.
Not that this show leaves anybody off the hook, including self-satisfied Northern liberals. Which is precisely as it should be: Scottsboro Boys is that rare piece of musical theater (or any theater, really) that offers a systemic political critique and drives it home in a way anybody can understand, and maybe even leave you humming some of the brilliant tunes. All that plus shadow-play and Cousin’s sparkling choreography.

Here’s Ted Hoover’s review of the show for CP, to which I’ll only add: See it, because a more complete theatrical experience is unlikely to hit Pittsburgh stages this fall.

The Playhouse is located at 222 Craft Ave., in Oakland.