The Scottsboro Boys at the Playhouse REP 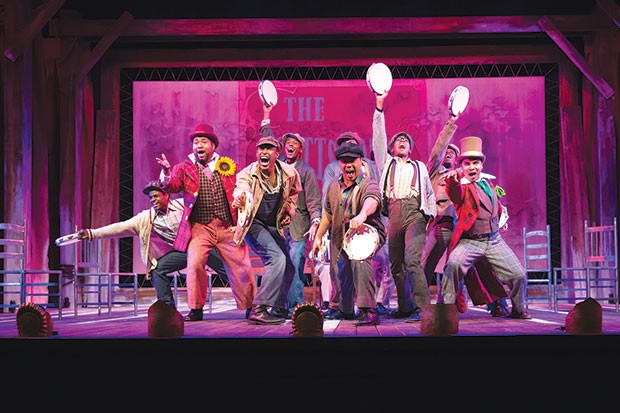 Photo courtesy of John Altdorfer
The cast of The Scottsboro Boys, at the Playhouse REP

The Scottsboro Boys will probably be best remembered as the final “Kander & Ebb” musical – lyricist Fred Ebb died during the writing process, and composer John Kander finished the lyrics for the 2010 New York opening. But ultimately that’s a tiny part of The Scottsboro Boys.

In 1931, nine black boys and young men were pulled from a train in Alabama and charged with raping two white women. In a series of patched-together trials, they were convicted and sentenced to electrocution (although the braying crowds outside would have been even happier with a lynching).

In spite of a national wave of attention, a couple of landmark Supreme Court rulings, and one of the women recanting her testimony, these innocent men still spent between six and 19 years in jail. Ruined by the inhuman treatment they’d received in prison, and victimized by a racist judicial system, none of the men (who were teenagers — or younger — when they were charged) went on to happy lives.

And yet some people feel their Constitutional rights are abused when a statue gets taken down!

The Playhouse REP presents the local premiere of this extraordinary musical which, it must be said, is not for the faint-hearted. It’s not just that the story is so horrific (with recent events only ripping at the wound). It’s that Kander & Ebb have chosen to tell a ferocious story in an even more ferocious manner.

The duo have often used period entertainment forms to tell their story: Chicago is made up of the songs and “turns” of a typical 1920s vaudeville. Cabaret recreates the music and atmosphere of a Weimar-era nightclub. Kiss of the Spider Woman drives its tale of a South American dictatorship with spoofed vignettes of Hollywood movies.

So it’s not surprising that Scottsboro Boys is presented as a minstrel show … but a minstrel show dipped in acid and dripping with the blood of innocent men. It’s an evening of brutal satire and irony.

The REP’s director/choreographer, Tomé Cousin, along with music director Douglas Levine, appropriately pull out all the show-biz stops — these men continually drive home the point that American justice is, and probably has always been, not about the truth but about the theatricality of “truth.” People want to be comforted, not challenged.

If you’re of the opinion that shows like Legally Blonde and/or Mamma Mia! are a good night out, you’d do well to stay away. But if you believe entertainment can also be scary, intelligent, ruthless and infinitely sad, then the REP’s production of The Scottsboro Boys is for you.