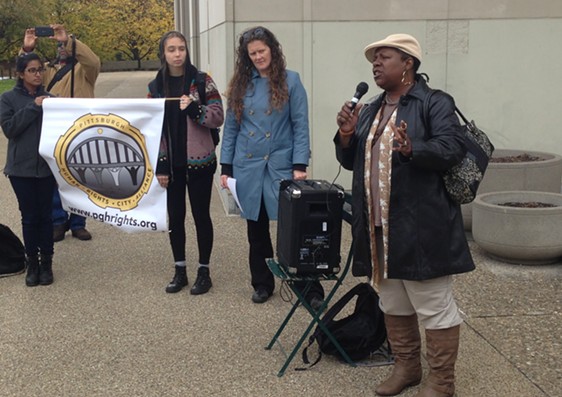 CP photo by Ryan Deto
Mischelle McMillan speaks to the crowd at an affordable-housing rally in Oakland.
On Nov. 11, more than 50 affordable-housing advocates rallied on the University of Pittsburgh's campus to discuss what needs to be done to address the world's shortage of adequate and affordable rental housing. The rally is part of a larger Housing Summit which is sponsored by Pitt's Global Studies Center, bringing hundreds of people from across the globe to discuss how the affordable-housing crisis is affecting Pittsburgh and other cities.

"We need to fundamentally change the whole discourse on housing and human rights," said summit organizer and Pitt professor Jackie Smith. "We need to build it up from the grassroots, not the top down."

Speakers at the rally focused on topics like ensuring that decent affordable housing was located in places with good public-transit access and rethinking the criteria that qualifies neighborhoods for subsidized housing. One topic that resonated with the crowd was giving control on housing decisions directly to the community, instead of putting it in the hands of landlords and developers.

"As more and more people become renters, we need to be able to expand renters' rights," said Malcolm Terrejón Chu of the National Homes for All Coalition. "It's not just about affordable housing, it's about permanent decisions on housing [being] controlled by the community."

After the rally, attendees hopped on a bus tour that took them to the Hill District, the North Side, Beechview and East Liberty to see Pittsburgh's affordable-housing stories first hand.

Mischelle McMillan, of local housing advocates Action United, has been advocating for better housing in the Mon Valley and Pittsburgh for years. She said that housing is not a privilege, it is a "God-given" right, and the city has a ways to go in terms of having a wide-ranging housing stock with good living conditions.

"I am disappointed with Pittsburgh," said McMillan. "We have too many landlords that are allowing us to live in deplorable conditions."

Rob Robinson, of the National Economic and Social Rights Initiative, spoke at the rally about the importance of renters speaking up for themselves. According to an August 2016 study, put out by apartment-search website Apartment List, renters are less likely to vote than homeowners, 58 percent to 72 percent respectively. "If you want human rights, you are going to have to take them," said Robinson.

A full slate of workshops are scheduled for tomorrow, Nov. 12, at the Frick Fine Arts Center in Oakland, as part of the Housing Summit. The summit is free to attend, but organizers ask that attendees register.