“The issue will be whether the dispute fueling the boycott of Whole Foods will be important enough to customers to create economic damage.” 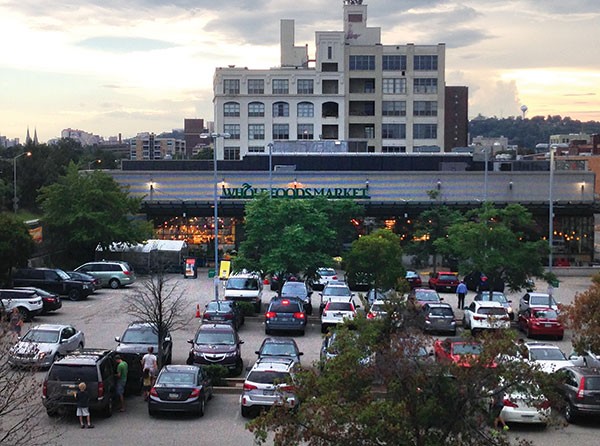 When more than 200 evictions were announced at Penn Plaza last summer, rumors quickly circulated about what the building’s owners, LG Realty, had in store for the site. Many believed a big-box store, like Costco or Walmart, would take the place of the 312-unit below-market-rate complex, but it remained a mystery.

In March, City Paper reported LG had a “firm agreement with an anchor tenant” prior to announcing the evictions. And now, according to an announcement last month, it appears that anchor tenant is Whole Foods Market.

In response, a small group of advocates have decided to boycott the grocery store, citing what they see as a disregard for Pittsburgh’s affordable-housing struggles.

“Do we need another Whole Foods more than the Penn Plaza residents needed the relationships and accessibility of being in centrally located affordable housing?,” says Joy KMT, who helped start the boycott effort.

But will the Whole Foods boycott make a difference?

So far, about 300 people have signed up for the boycott on Facebook, and KMT says the group may hold demonstrations. KMT says the group doesn’t have the capacity to “actively recruit” new members, but she welcomes more to join the Facebook group.

“I think that we have to start looking at communities as more than an assortment of buildings and land to be developed,” says KMT. “If we begin with different questions, then we will end with different answers.”

Whole Foods Market spokesperson Annie Cull is aware of the boycott and wrote in an email that Whole Foods “recognizes that this effort is a part of the overall conversation happening about the ongoing development of the neighborhood.”

“The East Liberty community has been going through a major revitalization over the last several years, and Whole Foods Market is a very small part of it,” she wrote.

John Delaney, a University of Pittsburgh business-administration professor and labor expert, says while some boycotts have been more effective than others, the strategy overall has tended to have only “moderate” effectiveness.

“The success of a boycott often depends on the salience of the issue in dispute to the people who might buy from a boycotted merchant,” Delaney wrote in an email to CP. “In the [Whole Foods case], the issue will be whether the dispute fueling the boycott of Whole Foods will be important enough to customers to create economic damage.”

CP talked to six shoppers at the current East Liberty Whole Foods on Centre Avenue (the grocer has indicated it will not keep both locations), and only half were aware of plans for a new store.

Most cited more parking as a potential benefit of the new store. All said they would shop at the new location when complete, except for one respondent who said she preferred the current location because it was more “Shadyside-y.” Only one of the six was familiar with the Penn Plaza affordable-housing saga. When asked about potential problems with the new location, he said “You know what happened over there was bad,” before indicating that he would still shop at the new store.

But should a boycott be directed toward Whole Foods, the property’s tenant, or LG, the owners?

KMT says yes, considering Whole Foods’ stated mission to promote community involvement. Whole Foods’ website states, “Caring for the communities in which we reside is hugely important to our organization.”

“I think that it would be important for Whole Foods to advocate for and protect vulnerable populations in the communities which they serve,” says KMT. “Whole Foods is actively seeking to profit from the displacement of families, and that is against the values that they have set forth to guide their company.”

Whole Foods is not new to the neighborhood — the Centre Avenue location has been in East Liberty since 2002. But even though the store has been part of the area for more than a decade, KMT says its decision to express interest in and occupy the site that was the last unsubsidized, below-market-rate apartment complex in the neighborhood should carry weight.

“Developments like this can’t work without the cooperation of many, from governmental agencies to private developers to corporations,” says KMT. “As an anchor store in East Liberty, the choices that Whole Foods makes absolutely do matter.”

Cull, of Whole Foods, said that the company would not be leading a community-collaboration effort, but directed CP to LG’s larger plans for the former Penn Plaza site. Jonathan Kamin, the attorney representing LG, didn’t respond to request for comment on the developer’s plans.

Construction of the new East Liberty Whole Foods is slated for the first quarter of 2017.