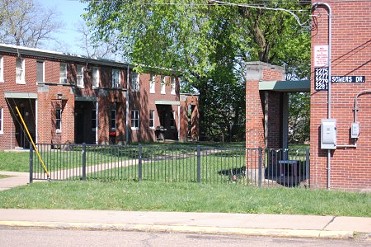 Photo courtesy of HACP
Bedford Dwellings
When people hear the phrase "nuisance property" most think of bars and other nightlife establishments that are frequently the site of violence or whose patrons often engage in disorderly conduct.

But in the past, this term has also been used to describe Bedford Dwellings, the city's oldest public housing project.
Located in the Hill District, the community has been marked by high crime for decades. From 2010 to 2014, it was ranked as the neighborhood with the second highest homicide rate.

But that could all change over the next decade. Over the summer, the city announced the U.S. Department of Housing and Urban Development had awarded Bedford Dwellings a $500,000 grant. The funds will be used by the Housing Authority of the City of Pittsburgh to stimulate affordable housing and economic development in the Hill District.

"This is the second time this city has been awarded a choice neighborhoods grant. We're fully in to make this a successful project to reinvest in the Hill District," said Kevin Acklin, Mayor Bill Peduto's chief of staff at a recent community meeting in the Hill District.

"When communities unite, there's no limit to what we can accomplish. We're here to deliver the kind of neighborhood you want to see. We're mindful that that new growth isn't happening equally in every neighborhood of the city."

The meeting held this week gave community stakeholders and residents a look at how the $500,000 Choice Neighborhoods grant will be used. But it got off to a rocky start when people entering the original meeting place — the Ammon Recreation Center — were met with sweltering temperatures.

The city tried its best to be welcoming — there was food and even a live band. But many in attendance weren't happy that the meeting was delayed after organizers decided to move it to Macedonia Church next door.

CP photo by Rebecca Addison
Brennan Massie
"Why do we need a band when we're here to talk about housing," said Michelle Hardeman. "We want to get the facts about what they're going to do."

The main take away from the meeting was that Bedford Dwellings would be torn down and replaced with a mixed-income housing community. Housing Authority officials said residents would be relocated and every resident would be guaranteed a spot in the new community once it was built.

Chestina Lane, who has lived in Bedford Dwellings for more than 35 years, says she hopes the meeting put rumors about the new development to rest. But she admits some of the details neighbors are concerned about remain unclear.

"I think it answered all my questions. I have a better understanding," says Lane. "Once it's torn down I'm concerned about the inconvenience. That's everyone's first question: where are we going to be [relocated]
and how long [will it take]. But I'm not scared because I've seen how it's gone in other communities."

Larimer in the eastern part of Pittsburgh was awarded a Choice Neighborhoods grant of $30 million in 2014 to build 350 mixed income housing units. The Hill District could be eligible for similar funds depending on the plan developed in this first phase of the program with the $500,000 grant.

The grant is to be used for three purposes. It includes replacing distressed public and assisted housing with high-quality mixed-income housing. Recipients are also tasked with creating "the conditions necessary for public and private reinvestment in distressed neighborhoods to offer the kinds of amenities and assets, including safety, good schools, and commercial activity, that are important to families’ choices about their community." Additionally, the plan should focus on providing services to improve educational outcomes and intergenerational mobility for youth and families.

“No child should be limited in life by the zip code where they were born,” HUD Secretary Julián Castro said when the grant was announced. “Today, we’re kick starting the revitalization in 10 distressed neighborhoods across the country. These grants will lay a firm foundation upon which we’ll build better, more thoughtful neighborhoods that are more connected to all the opportunities their communities have to offer.”

This week's meeting was the first in a series city officials say will give Hill District residents a say in the plan for re-development in their community. But some residents at the first installment remain concerned their voices won't be heard.

"There's no voice for us," said James Alston. "They keep holding meetings to tell us what they're going to do, not ask us."

Music To Sweep To 04: Useless Creatures