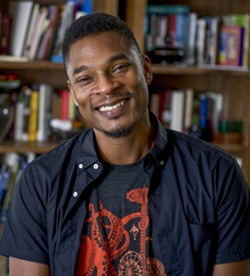 The AAAL ceremony is tonight in New York City. Hayes can’t make it, but (along with the $10,000 award) his name will be in some prestigious company: the other lit winners include Ta-Nehisi Coates (author of Between the World and Me), novelist Joshua Ferris (Then We Came to The End), and playwrights Stephen Adly Guirgis and Lynn Nottage.

In his election to the AAAS, Hayes is joined by fellow Pitt professor James F. Woodward, who teaches in the Department of History and Philsophy of Science. And their company, among some 175 inductees this year, includes such luminaries as poet Yusef Komunyakaa, artist Glenn Ligon and jazz musician Wayne Shorter.

Hayes’ only dilemma, he said, was how to draft his requested note of acceptance to the group.

“How do you relay your gratitude for something with such a rich history?” he said. He told CP that some of his thoughts about gratitude were captured in an essay he just wrote for ESPN spinoff theundefeated.com, recounting a phone call he got in college — when he was deciding whether to pursue poetry or basketball — from none other than Maya Angelou.

Hayes said he views the inclusion in something like the AAAS as honoring a body of work. When I suggested that membership sounds like it would involve wingback chairs and snifters of brandy, Hayes laughed. The scene is actually relatively informal. Election doesn’t include a cash prize, but it does place him among prestigious peers — as if being asked, he says, “Here you want to come hang out with us?’ … The reward is to be in the village, to be associated with them.”

Indeed, he says that if he is able to attend the AAAS ceremony, in Cambridge, Mass., in October, he would “go as a fan” of the other members.

Moreover, he jokes, writing poetry is just as tough with such an honor as without.

Here’s a long-form profile of Hayes I wrote back in 2006.

Correction: Alison Knowles event at the Carnegie is tomorrow night