The Carnegie's Evening of Drawing With Nicole Eisenman | Blogh

The Carnegie's Evening of Drawing With Nicole Eisenman

In a gallery on the first floor of the Carnegie Museum of Art, Sarah Moreno, a retired elementary school teacher from Bethel Park, sketched a man with tattoos spiraling out of the bottom edges of his black boxer briefs. Her pencil box lying between her knees, Moreno drew with her left hand, her light strokes contrasting with those of a woman sitting a few feet to her left, where thick dark lines punched out from the page. 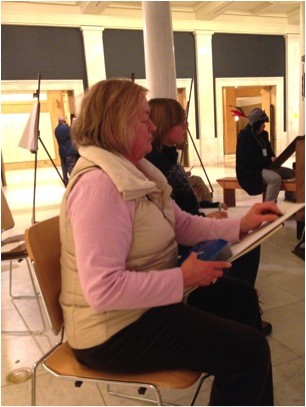 Moreno, who taught first- and second-graders for more than 40 years, said that drawing was something she’s always wanted to do but didn’t have time for. “I want to get out all these ideas before I die,” she laughed.

She was just one in a crowd of about 300 who attended last night's Drawing Experience with Nicole Eisenman, the internationally known artist who won the 2013 Carnegie International's Carnegie Prize.

The workshop was part of Carnegie Mellon's three-day DRAW2014symposium. Artists were clustered throughout the museum, drawing the live models stationed in different galleries. Eisenman had just shared her thoughts on the medium during her opening remarks: Drawing, she said, is “one of the first moments of recognizing agency in the world.” It “means more than to be represented by a line drawn across the page … It means to be allured.”

Moreno was excited to attend; the museum stopped offering art classes right around the time she got into art. “I always wanted to be an artist,” she whispered in the museum’s hall of sculpture as she sketched a female model with pierced nipples. “But I had to bide my time [with a more practical career].”

That’s part of what brought Moreno here tonight. The other part is the allure that Eisenman spoke about. A member of the Carnegie Museum, Moreno estimated she’d seen the 2013 Carnegie International show five or six times. And it showed: She pointed out an Eisenman painting she loves — “I’m With Stupid,” in which a clown-nosed boy wears a shirt printed with the same statement and an arrow pointing downward, his genitalia completely bare — as we wandered along the hall of sculpture balcony. This is where the Carnegie Prize winner also has a sculpture of a seated figure slouched over and texting — right next to a Roman copy of a Greek statue.

(“She’s so creative,” Moreno said later in the lobby, speaking about Eisenman. “There’s a sense of humor with her work that I enjoy, and yet there’s a serious side too.”)

Now that she’s retired, Moreno is turning her garage into a studio. Though she first claimed to not be an artist when asked for an interview, at the end of the night she made a different statement. “I think everyone’s an artist. But a lot of people get inhibited because they look at other people’s work and they think, ‘Oh I can’t do that.’ People say they can’t draw but I think everybody can draw. It’s just [a matter of] making effort and being free.”