Should a Larimer parking lot also be pitched as a transit center? | Blogh

But at the same time, the developer, Walnut Capital, is also pitching the project as a “multi-modal transit center.” The parking garage is the first step in a proposal to link Bakery Square, home to a Google office, to a new busway station that would also serve Hamilton Avenue in Larimer. Pittsburgh City Councilors Ricky Burgess and Erika Strassburger have given the project support, saying it will spur economic development and help create affordable housing.

“It is a terrible idea, we don't want 700 people driving on Penn Avenue to then get on public transit,” says Wiens. “That is not how our transit system should work.”

Wiens says it would be better to encourage and improve Bakery Square’s existing public-transit access.

“We should be encouraging more frequency of the routes that already run through there,” says Wiens.

There are currently eight different bus routes that pick up at stops near Bakery Square, including two (the 71C and 88) that often use double-length buses. When factoring all stops in the immediate vicinity, Bakery Square sees around 12 buses every hour. Additionally, it is only a 10-minute walk on wide, well-maintained sidewalks from Bakery Square to the East Liberty Busway station.

A new busway stop at Bakery Square could actually make riding on the busway worse, since the proposed stop is too close to the East Liberty station. Weins says a Bakery Square station, especially one with a parking lot to encourage drivers, would add few new riders to the busway.

“How is this uplifting Larimer and Point Breeze? I don’t get it,” says Wiens. “Is the only intention to serve Bakery Square employees who have a midday meeting in Downtown?”

Walnut Capital did not respond to a request for comment on this story.

Brandolph says Port Authority is working with the developers on maintaining bus service at Bakery Square. “We are aware of the project, we are working with them that keeping excellent service there,” says Brandolph.

Wiens also questions why $2.5 million in public subsidies were given to a the Walnut Capital development. She believes those subsidies might have been withheld if the development wasn’t pitched as a multi-modal transit center.

“How was it possible for they got $2.5 million in subsidies when the public wasn’t brought in and the Port Authority wasn’t included?” asks Wiens. 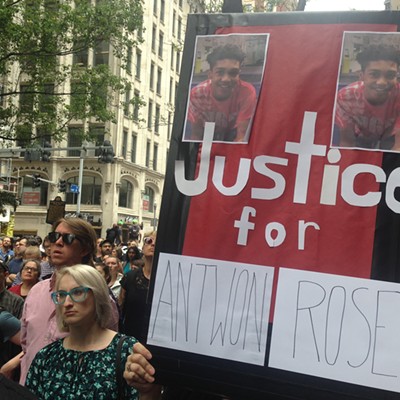