While they might not be on a grand scale, important changes are on the horizon for public transportation in the Pittsburgh region | News | Pittsburgh | Pittsburgh City Paper

While they might not be on a grand scale, important changes are on the horizon for public transportation in the Pittsburgh region 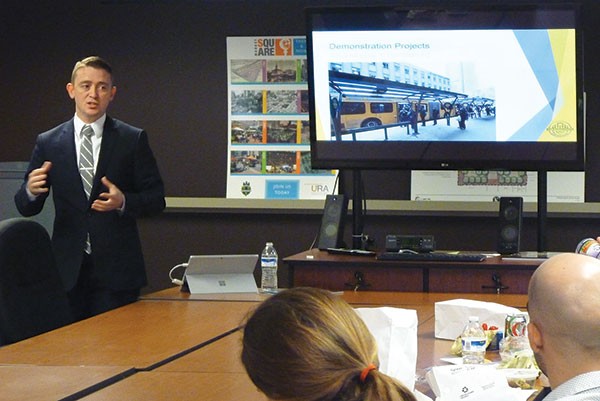 In 2013, City Paper wrote about a public-transit map that includes seven proposed light-rail lines, extending 233 miles throughout Allegheny County and beyond. The map went viral and found its way on to T-shirts, posters and iPhone cases. Recently, the map resurfaced in a Pittsburgh Post-Gazette column and reignited enthusiasm. And while the map has Pittsburghers dreaming about taking subways everywhere imaginable, some harsh realities may stand in the way.

The map proposes 207 additional light-rail miles and, according to the map creator’s own estimate, that would cost $7.25 billion. (Transit experts say this number could easily be tripled.) Port Authority’s 2016 capital budget is $175 million.

“That is so expensive, that is so outside our scope,” says Port Authority of Allegheny County CEO Ellen McLean. “If an act of God gave us the billions of dollars it requires, I am sure that the political leaders would like to do that. But there is no sense in us sitting back and contemplating our navel on that one.”

The fact is, transit officials and advocates don’t need to dream about maps that will never be financially feasible, because changes are coming to the region’s public-transportation system. Plans to improve development near transit stations are already in the works, as is a pilot program that will reduce wait-times at traffic signals. Potential projects include bus rapid-transit expansions and even a driverless shuttle line from Oakland to Hazelwood.

And while some plans are more ambitious than others, officials have begun looking for funding, and all the projects have drawn both support and criticism from politicians and advocates. In fact, most of them could start making a difference in the next few years, not the next few decades.

Sean Luther, of public/private partnership Envision Downtown, thinks this is for the best. He emphasizes the importance of starting public-transportation improvements now, so Pittsburgh can compete with other mid-size cities that are likely to receive an influx of workers as major cities become too crowded and expensive.

He references a story in which the ride-hailing company Uber stated it is having trouble finding people to fill positions at its Pittsburgh advanced-technology lab, where the company is creating driverless cars. “Uber is trying to get the same [caliber] of people that are going to San Francisco, Austin and Seattle,” says Luther. “Those people want to be able to ride their bike to work and take transit.”

Chris Sandvig, a transit expert who works at Pittsburgh Community Redevelopment Group, agrees. “We have a small window where people are looking at us, and if we don’t start making things happen, they are going to look elsewhere,” he says.

One of the plans that could make an immediate impact is Transit Oriented Development. TOD has become the new buzzword at the Port Authority. (PAT is the first transit agency in the state to create TOD guidelines.) These guidelines lay out methodology to make sure new housing, retail and job centers have easy access to transit stations with frequent service. Plans are in the works for a 150-unit apartment complex and retail development surrounding the Castle Shannon T station in the South Hills; the revamped East Liberty Transit Station, with apartments and businesses adjacent to the stop, is almost complete.

The benefits of TOD are obvious: When people live near good transit, they have easier access to jobs and can save money related to car ownership. On the streets, vehicular traffic is reduced. Development near transit can also spark neighborhood revitalization. Port Authority and the city are also looking at potential transit-oriented development in other South Hills communities and in the East End. Additionally, PCRG is trying to sell the virtues of TOD on the busway in Wilkinsburg and Swissvale.

Molly Nichols of Pittsburghers for Public Transit, a transportation-advocacy group, also believes TOD can provide poor communities a step up on the economic ladder. “If they are living near the best transit service, they have the opportunity to move forward with their lives,” she says. Nichols points out that the publicly funded projects in East Liberty and Castle Shannon do not contain enough units of affordable housing. Castle Shannon, for example, has none.

“Any development happening near good transit service needs to be open to every member of the public, especially those that use transit,” says Nichols. “People are working to make ends meet, they are living in places that they can’t access the things they need.”

Another project that is already positively impacting the area’s transit is a computerized traffic-signal system called Sur Trac. The Carnegie Mellon-developed technology utilizes machine-learning computers in combination with radar technology at intersections to track the flow of traffic more efficiently. For example, if an intersection has 20 cars coming one direction, and one car traveling another direction, the system can give priority to the 20 cars.

Stan Caldwell, director of Traffic 21, a transportation-research institute at CMU, says the system (which already operates at 49 intersections in East Liberty and Bloomfield) has already reduced wait times by 40 percent and cut auto emissions by 20 percent. Caldwell also says the technology can be used to improve riding the bus. For example, if a bus doesn’t have to stop, it can communicate with the computer, which would keep the light green to shorten travel times, according to Caldwell.

PAT spokesperson Adam Brandolph says Sur Trac technology is not currently deployed on PAT buses, but putting it on buses is a part of Pittsburgh’s Smart Cities federal-grant application, which is to be finalized this week. Brandolph adds that the authority plans to seek funding for Sur Trac even if the city loses out on the grant.

Another component of the Smart Cities application is the creation of an autonomous shuttle line that would connect the universities in Oakland with the future development at the Almono site, in Hazelwood. Uber, a prime sponsor on the application, is developing driverless-vehicle technology and is the first company to announce plans to develop at Almono.

But while it would put Pittsburgh on the map as one of the first cities in the world to implement autonomous-vehicle technology beyond experimentation, this plan has its critics.

The most outspoken of these critics live in Four-Mile Run, a portion of the shuttle line. Resident Randall Hall doesn’t believe the connector will bring any benefit to his community because, he says, most residents merely walk or bike on the trail up to Oakland. “I am not opposed to development in general or Almono,” wrote Hall in email to CP. “I just don’t want to have shuttles going through our safe corridor.” Residents have started an online petition opposing the project that as of press time had received more than 300 signatures.

“Autonomous vehicles are coming,” he says. “But how do we make sure this new technology does not become an interstate highway 2.0?” He says there needs to be policy that will ensure this doesn’t happen.

“If we can set a policy precedent that autonomous-vehicles technology is a public good, not a private privilege, then we can fix some of the major transit sins of the past,” he says.

Gabe Klein, former head of the Department of Transportation in Chicago and Washington, D.C. and author of urban-planning book Start-Up City, spoke at the Pittsburgh Downtown Partnership’s annual meeting this March, and emphasized that driverless vehicles must be occupied by multiple passengers. “Driverless technology can be a very positive force for change if the private and public sectors prioritize shared use of small-format vehicles, as well as transit vehicles,” wrote Klein in an email to CP. “This can free up space for walking, biking, dedicated transit lanes and park space. [But] in the absence of good business models and the right government intervention and leadership, we could doom ourselves to endless sprawl.”

Finally, Pittsburgh transit experts are pushing for expansion of the busway system to solve public-transportation problems. McLean, of PAT, says busway expansion, both of the East Busway to Turtle Creek and a new bus-rapid-transit line from Oakland to Downtown, are projects high on the authority’s wish list. But, as with all transit-expansion plans, funding is a major obstacle.

Port Authority funding is currently stable, and no service reductions are expected, but PAT’s capital budget is completely dedicated to maintaining the current system.

McLean says ridership is growing, but the authority doesn’t even have money for a new bus garage, let alone funds for busway expansion. She and a coalition of other public-transit heads from across the country are calling on state and federal governments to increase funding.

“Transit systems drive economic growth, and our region — as an epicenter of innovation — is poised for an increase in population,” says McLean. “But the way our funding stands today, we simple do not have the money to meet much of an influx.”