The new East Liberty Transit Center is a mixed success 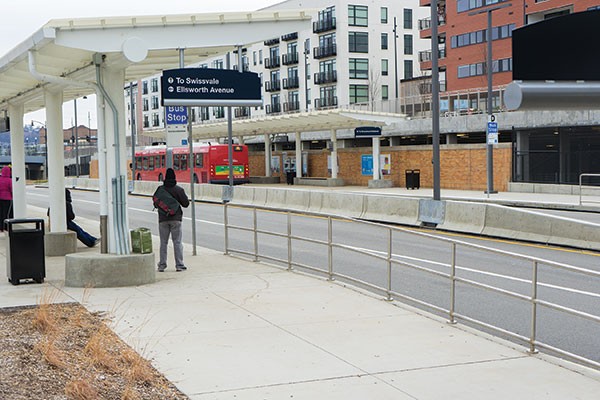 At the opening of the East Liberty Transit Center in November, Mayor Bill Peduto described a process that had taken 14 years from inception to near-completion. Alleghney County Executive Rich Fitzgerald commented that, at the beginning, “We had problems of blight; now we have problems of growth.” The long-simmering project at Penn Avenue and the Martin Luther King Jr. Busway reflects not just a changing Pittsburgh, but a Pittsburgh with changing goals.

The transit station itself constitutes the reorganized traffic intersections and transit stops at Penn Avenue, the busway and Ellsworth Avenue, extending to Highland Avenue. Numerous sources of public funding, culminating in a $15 million federal TIGER grant, subsidized the transit infrastructure, which also includes the lengthy parking garages wedged along the East Liberty side of the busway. These provide capacity to encourage the mixed use, housing and retail construction by Mosites, Inc., which is nearing completion above the garages, in precisely the kind of public-private partnership that such federal and state funds aim to encourage.

The widely touted Transit Oriented Development aims to place residences and retail closer to mass transit to encourage more traditional urban density and decrease automobile use, but it still apparently takes an enormous amount of parking to make such a thing work.

And the project is still not complete. Some of the connecting streets between the new residential units and the busway are still under construction. Some of the housing is occupied, but the retail and parking apparently are not.

Thus far, the project’s transit component incorporates some important successes for the car-free world. The bus stop used to be a confusing swirl of isolated concrete, connecting to the busway in a forbidding, multilevel divide. The new project adds a clever connecting platform between road and a sheltered area at Penn Avenue so that the space is more accessible, but also buffered by a landscaped element. It is also served by a bike shed (the complex’s most visually appealing component). The transition to the busway below now comes via gently sloped paths through a pleasantly park-like (though incongruously suburban) designed greenspace that will only improve as its plants grow in.

Urban designer Jonathan Kline, from the Studio for Spatial Practice, who developed the overall initial design scheme and worked on numerous phases of design and construction of the project, describes a process of reconciling required dimensions and costs. Both PAT and PennDOT were clients on the project, and their institutionalized design standards for roadways dictated much of its character. “The busway as designed is basically a four-lane highway, so [many elements were] unchangeable,” he comments.

Still, the busway stop, while much improved, retains the whiff of a freeway exit. It seems much longer than it needs to be. It still has Jersey barriers down the middle, and that new pedestrian bridge from Ellsworth spanning the busway, though necessary and welcome as a connector, looks like something from a border crossing, not a city (and even a street) of artistic and historic bridges.

Too much of the sprawl of automobile-oriented construction here is present where it is not needed or welcome. Someone with political pull should strong-arm PAT and PennDOT into relaxing their design standards to make works of this kind better in the city. This should blend better with the traditional and tight residential urbanism of Ellsworth Avenue, which it abuts.

The garages across the busway might just be the inverse. They will house many cars, but will hide them effectively, at least until they leave, when the already tightly clogged streets will get a fresh infusion of cars.

It’s a very delicate proposition to level criticism at this project. It has particularly broad political support, partly because the funding comes from many foundations, as well as every level of government. Likewise, because one component is an improved transit station, almost everyone is in favor of some significant portion of it.

And it’s a project that includes many significant improvements. But it still incorporates too much of either the values or the actual presence of too many automobiles.

In the underserved East Liberty of 2002, or the Great Recession of 2009, this might not have mattered much. But in 2016, with sustainability initiatives like the p4 program, the 2030 District and areas such as the Uptown Sustainability zone, we have honed our values significantly.

We don’t have to criticize anyone for the shortcomings of this project if we can thank them for the clarity with which we can now improve the next ones.