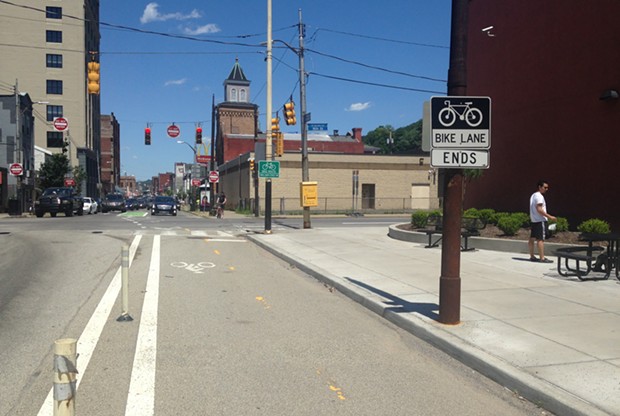 Bike Pittsburgh is frustrated with waiting for that route to see improvements. The group is calling for the extension of bike infrastructure into the Strip District and beyond. Boerer says the Strip District’s booming development makes it necessary to create a safe bike passage to Downtown.

“In the past four years, a lot has changed in the Strip,” says Boerer. “There has been a ton of development, but we haven't provided better transportation options for people who live and work there.”

Boerer says improvements and expansion of transit infrastructure is needed to keep up with the growth. He says accommodations should be made for the increasing number of bike commuters in Pittsburgh.

Bike Pittsburgh isn’t making any specific demands regarding bike infrastructure, but the group has suggestions.

Pittsburgh could reinvigorate the Allegheny Green Boulevard plan, which would convert an abandoned railway into a bike/walking trail to connect Downtown through Lawrenceville. Boerer also suggests the possibility of extending the Penn Avenue protected bike lane all the way to Lawrenceville, by eliminated a parking lane on that street. Lastly, Boerer says Smallman Street could be redesigned to include bike lanes, and potentially be converted to one-way, outbound for vehicle traffic.

“Our solution right now isn’t specific,” says Boerer. “We are trying to be fairly reasonable, Penn [Avenue] doesn't need to be extended in a specific place. It should be a safe and easy commute for cyclists, but right now it is not.”

“If we encourage this new development of the Strip District, and not offer alternative community options, people will drive,” says Boerer.