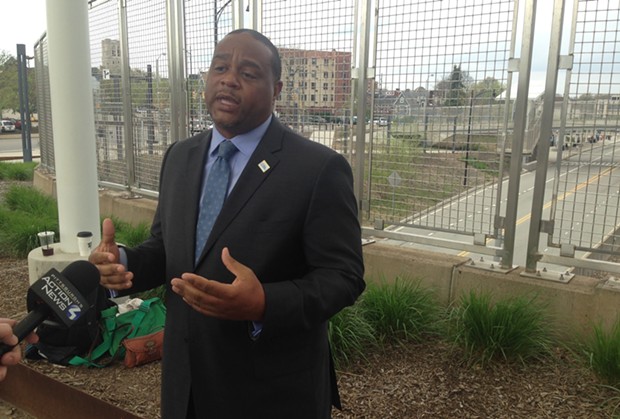 CP photo by Ryan Deto
Ed Gainey
In September 2017, the Port Authority of Allegheny County was awarded a federal-government grant to purchase the agency’s first electric bus. The electric bus will likely serve the 88 route that runs along Penn Avenue from Point Breeze to Downtown, and Port Authority officials say it will serve as a test bus for the proposed Bus Rapid Transit, which hopes to include 25 electric buses.

“We have to save Mother Earth,” said Gainey at a May 3 press conference at the East Liberty transit station. “The more we can invest in cleaner air, the more we are looking to the future. And we know electric buses are the way of the future.”

Rachel Filippini of Group Against Smog and Pollution (GASP) said at the press conference that pollution from buses that run on fossil fuels can be additionally harmful to people since the emissions are pumped into the air at ground level. She said exposure to diesel exhaust can contribute to higher cancer rates and that children are especially vulnerable.

“If Pittsburgh and Allegheny County want to reduce the effects of climate change, then reducing emissions from buses is a big part of that,” said Filippini. “Electric buses can help.”

Laura Wiens of Pittsburghers for Public Transit applauded the incremental progress the Port Authority has seen in winning the $500,000 grant for the agency’s first electric bus, but said there are multiple funding sources available that could help build a large scale fleet of electric buses. She mentioned that Pennsylvania is receiving about $118 million in a settlement from auto manufacturer Volkswagen. Wiens said some of that money could go to purchasing electric buses.