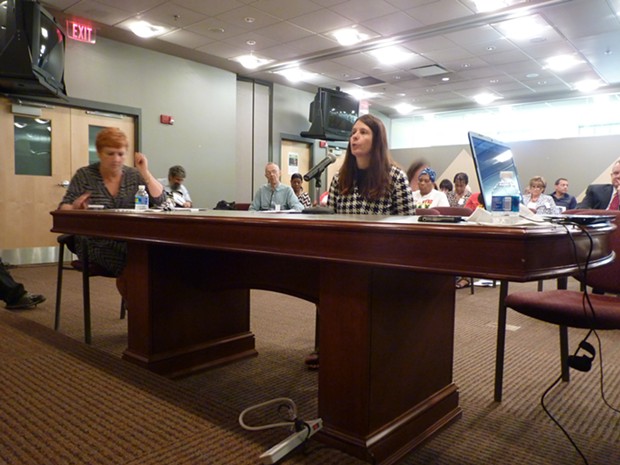 Photo by Ryan Deto
Rachel Filippini, of Group Against Smog and Pollution, speaks at Port Authority board meeting.
According to a 2016 report from the American Lung Association, the Pittsburgh region failed its criteria for healthy levels of ozone and particle pollution. The region improved on its air quality report from last year, but still has a way to go.

"While air quality in Pittsburgh has improved over the last several decades," says Rachel Filippini, of Group Against Smog and Pollution, or GASP. "We continue to have some of the worst air pollution in the country, especially in terms of fine-particulate matter. One source of these emissions is Port Authority buses."

It is for this reason that a group of environmental and transit advocates spoke at June's Port Authority of Allegheny County board meeting and are calling for the authority to “green their fleet” by 2030, specifically an all-electric fleet.

While advocates applaud this effort, they are asking PAT to go even further. Filippini says she would like to see all pre-2006 buses eventually taken out of service and is asking the authority to transition to a fleet of electric buses that are fueled by renewable energy sources. “We must work to green the fleet.”

Kimmy Dihn, of transit-advocate group Pittsburghers for Public Transportation, says moving toward more environmentally friendly vehicles could help address public-health issues, too. “We are voicing the concern of how buses affect the public health of pedestrians, cyclists and public-transportation riders.”

She too is asking PAT to transition to an all-electric fleet. Warwick Powell, of environmental group 350 Pittsburgh, says greening the bus fleet could make Pittsburgh a climate-change leader. He also says this is a great time to do so, given all the local support, including the arrival of solar-energy giant, SolarCity, to the Pittsburgh market.

“Renewable energy has never had stronger support from the government and the public,” says Powell.

PAT spokesperson Jim Ritchie says including electric vehicles is “something we are interested in.” He says the authority is currently working on specifications that will consider including electric buses in the next contract of bus replacements, which could be presented this fall. Ritchie adds that PAT has already tested electric vehicles from companies like California-based Proterra and Canadian-based New Flyer, and plans to test electric buses from one more company. He also notes that the PAT fleet does include 32 hybrid vehicles.