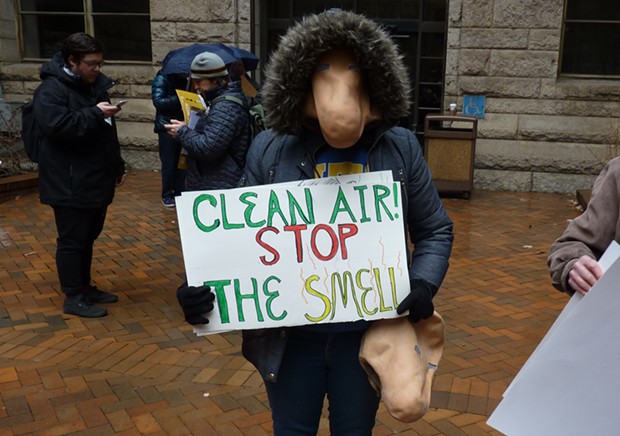 
Barber also noted that Allegheny County is in the top 2 percent for cancer risk of all counties in the U.S. He said Pittsburgh’s poor air quality could be a hindrance to attracting tech companies like Amazon.

“No Amazon executive wants to increase their cancer risks when they decide to ride their bike to work,” said Barber.

And there is some evidence that environmentalism is important for Amazon employees. ARLnow.com, a news site for the Arlington, Va. region, reported on Feb. 20 that a vast majority of the traffic to an ARLnow.com story about environmentally friendly building award came from “what appears to be an internal Amazon.com page devoted to its HQ2 search.” Arlington, Va. is a finalist for Amazon’s second headquarters search, as is Pittsburgh.

Ian Price, of the political-grassroots group Tuesdays with Toomey, also spoke at the rally and believes the region’s poor air quality is a deterrent from attracting new residents and growing the local population. “Air quality if something that drive people away from Pittsburgh,” he said.

The rally coincided with PennEnvironoment releasing its Toxic Ten report for Allegheny County, which highlights the 10 industrial facilities in the county that emit the most pollutants.

Barber said that local elected officials, and Allegheny County Executive Rich Fitzgerald in particular, should take steps to reign in pollution at area industrial facilities by increasing enforceable permits, up the reporting of what emissions these industrial facilities are releasing into the air, and establish escalating penalties for air-pollution violators.

Annie Regan of statewide advocacy organization PennFuture also called for local leaders to help increase enforcement of local polluters. “Our health should not be determined by our zip code,” said Regan at the rally.

Editor's note: The quote that read “Our health should not be determined by our zip code,” was originally attributed to rally attendee Rachel Filippini of Group Against Smog and Protection. Story has been updated to accurately attribute who said that quote, Annie Regan of PennFuture.