“How are we going to bring [Amazon] into Western PA, where the trajectory is defined by natural gas? That is where there is a disconnect.” 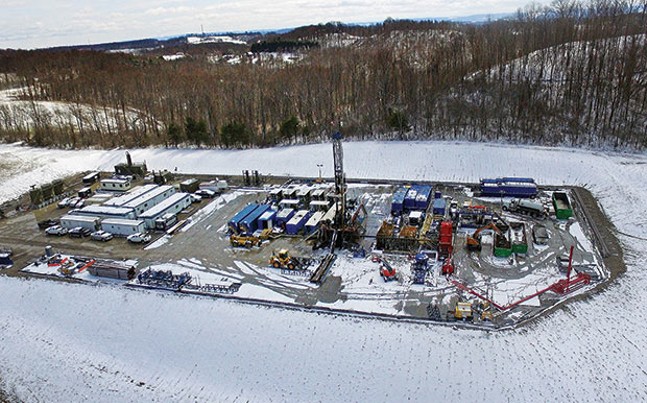 Each year, more and more studies from environmental groups show how natural-gas drilling, also called fracking, is harming the environment. Whether it’s contaminating drinking water or spewing methane into the air, environmental activists say it’s becoming harder to defend fracking from an environmental point of view.

But despite environmental concerns, proponents of natural gas have always had a strong motivation to keep drilling: jobs. Pennsylvania House Speaker Mike Turzai (R-Marshall) is a champion of the natural-gas industry and he said in a 2015 Pittsburgh Post-Gazette article that the fracking industry is “creating work for steel manufacturers, engineering firms and refineries.”

Allegheny County Executive Rich Fitzgerald has also been supportive of fracking and believes it can help create jobs. In 2014, when the county allowed fracking on public land near the airport, he told KDKA that money generated from natural-gas drilling can “create jobs in this part of the county.”

According to figures from the Bureau of Labor Statistics, from 2007 to 2012, Pennsylvania added more than 15,000 jobs in the oil and gas industry, with a large chunk of those concentrated in the Pittsburgh region. During this same time period, the Pittsburgh region’s overall employment also increased; 2012 was the first year in more than a decade that the region saw its population grow instead of shrink.

But tying employment growth to increased natural gas production in the Pittsburgh region could be seen as a bit of a leap. There are many factors that can lead to growth in some gas-related industries, including job losses in other areas. Natural gas is a direct competitor to other energy industries in the region, and its growth has already contributed to job losses at coal mines and power plants. And even though natural-gas production has drastically increased over the past few years, the gas-drilling job figures aren’t really following suit.

But, natural gas proponents say job growth is happening in ancillary fields, which more than easily offsets the lack of robust growth at drilling pads. Environmentalists believe fracking is not a sustainable enough industry to deserve such broad support. They say energy and investment should be driven towards clean energy, like wind power. Either way, a choice between pursuing more clean-energy or continuing to back natural gas is emerging in Southwest Pennsylvania. And the decision could impact the region for decades to come.

But during this same time period, drilling jobs at natural-gas wells drastically shrunk in Pennsylvania. After 2014, oil and gas jobs started to drop off; from 2015 to 2016, Pennsylvania lost more than 10,000 jobs in the sector. In the Pittsburgh region, natural-gas jobs were at 3,039 in the third quarter of 2017, according to state data. While a slight increase from the same time in 2016, this is still well below Pittsburgh’s peak natural-gas employment.

“Clean and abundant American natural gas supports hundreds of thousands of good-paying Pennsylvania jobs, especially across our hard-working and talented building-trade unions,” wrote Wright in a statement to City Paper.