With the coming improvements of BRT, some bus riders will have to transfer to get all the way to Downtown Pittsburgh

“The benefit overall, even if you are transferring, is that you still have a travel-time savings.” 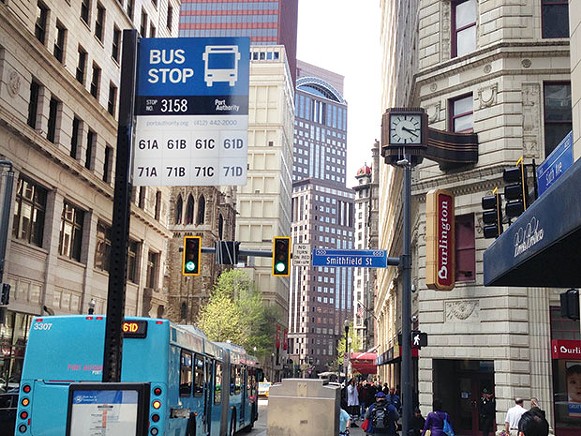 CP photo by Ryan Deto
Bus stops like this one Downtown will be replaced by BRT stops, forcing some riders to transfer in Oakland.

After years of waiting, plans to bring a Bus Rapid Transit system to Pittsburgh are moving forward.

The BRT, which some have called light rail on rubber wheels, will make substantial changes to infrastructure and design in the Fifth-Forbes corridor between Downtown and Oakland, including the installation of bus-only lanes, stations with large, modern shelters, and bike lanes. The BRT’s goal is to improve multi-modal transit between Pittsburgh’s two largest business centers, and decrease congestion.

But if Pittsburgh’s Bus Rapid Transit line is installed between Downtown and Oakland, a minimum of 1,500 riders a day could be forced to transfer buses to make it Downtown. Riders coming from Braddock, Regent Square and Homestead will be most affected. Regular Port Authority buses, like the eight routes on the 61 and 71 lines, will not travel on the new BRT route, so riders of those routes will take their regular buses to Oakland and then hop on a BRT bus to continue Downtown.

Transit advocates are pushing to make sure this issue is fully vetted, asking the Port Authority of Allegheny County to ensure Mon Valley and East End riders’ experiences aren’t worsened in exchange for BRT improvements to Oakland, Uptown and Downtown.

“I think if we can’t [maintain] the current route structure with all the planning for the BRT, then I don’t believe it is worth it,” says Paul O’Hanlon of the Committee for Accessible Transportation. “I will oppose it.”

Port Authority officials are aware added transfers will make changes, and are prepared to mitigate the problem before the BRT is finalized. But funding concerns and a push for a more futuristic public-transit vision suggest that compromises will have to be made.

According to Port Authority’s assessment, the most comprehensive BRT design (with bus-only lanes between Downtown and Oakland, and two branches that ride in traffic, to Highland Park and Greenfield), could add 3,100 transfers a day. The number of people affected would be about half that, says Port Authority spokesperson Adam Brandolph, because most people could get two transfers a day — one inbound, one outbound. Still, 1,500 people could have to transfer in Oakland just to travel the same route they always have.

O’Hanlon is currently opposed to the BRT for this reason. He says Port Authority hasn’t done an adequate job of communicating the potential downsides of the BRT. O’Hanlon says the BRT will lead to decreases in frequency for routes on the 61 line, and that riders coming to and from the Mon Valley will have to wait longer for buses.

“Imagine going home [from Downtown], how do you time that if your transfer bus is only coming every 30 minutes?” asks O’Hanlon. “What if you miss it?”

Port Authority analyst Amy Silbermann recognizes transfers will increase, but says the potential upside could make those rides shorter, even with a transfer.

But O’Hanlon wonders why transfers are necessary in the first place. He says current routes, like the 61s and 71s, could just as easily travel on new bus-only lanes all the way to Downtown.

Silbermann says this option is viable, but has issues. She says grant-funding for less comprehensive changes, like designating a lane as bus-only without installing modern stations and using new, electric vehicles, is limited and might not facilitate ridership growth.

“What you don’t get if you don’t really do the full-scale infrastructure upgrade for a rapid-transit line, is you don’t get the new riders,” says Silbermann. “So we are really hoping that [the BRT] is going to stimulate our ridership in this corridor and grow it significantly over time.”

Molly Nichols, of transit-advocacy group Pittsburghers for Public Transit, sees potential upsides too, like congestion reduction. She points to Port Authority statistics showing that buses make up only 4 percent of vehicle traffic on the Fifth-Forbes corridor, even though 51 percent of people arriving in or moving through Oakland get there via bus.

But Nichols also worries about Mon Valley riders who will lose route frequency. She points out that if these riders, who are majority black and low-income, are negatively affected, Port Authority could face charges of violating civil rights.

“They have to prove that a project like this doesn’t have disproportionate impact on minorities or vulnerable populations,” says Nichols. She also wants Port Authority to ensure these added BRT transfers are free, since riders currently aren’t paying for them.

Silbermann says Port Authority will account for senior, low-income and minority riders, when moving forward with planning. And Brandolph says Port Authority is considering ensuring BRT transfers are free for some riders. Brandolph adds that many of these issues related to transfers will get more consideration, and a public vetting process, once the BRT route is finalized at the end of April.

The City of Pittsburgh will apply for a federal grant at the end of September and, according to Silbermann, the Port Authority will discuss and try to solve these transfer issues before then.