Owen Benjamin is a well-known comedian in the conservative-media world. Benjamin is white and one of his signature bits is singing a song called “that [n-word] stole my bike.” Benjamin has defended his takes on race as tackling political correctness. He is a self-described critic of liberalism and left-leaning politics. In March, he tweeted “what a [n-word] queer” and linked a story about Canadian Prime Minister Justin Trudeau. Benjamin has said efforts to curb his brand of comedy are censorship.

In late March, the New Hazlett Theater canceled his stand-up event in Pittsburgh after learning more about Benjamin’s material and social-media presence. About a week later, Benjamin’s Twitter account was suspended after he tweeted about Parkland Shooting survivor David Hogg’s pubic hair. He had more than 180,000 followers on Twitter before his account was suspended.

But before Benjamin’s Twitter account was permanently suspended, he had a confrontation with Pittsburgh comedian Day Bracey, who had pushed back against Benjamin’s racist and anti-LGBTQ rhetoric. Bracey believes Pittsburgh venues shouldn't work with Benjamin, given his use of racial and LGBTQ slurs. But, in arguing with Benjamin and his legion of fans on Twitter, Bracey had his Twitter account permanently suspended, which he says is a big hit to his growing brand in Pittsburgh. Even so, Bracey is hopeful Pittsburgh will reject Benjamin's brand of comedy. But Benjamin has apparently found a new venue and he has cast himself as the victim of "activists" like Bracey. He hopes to use Pittsburgh to highlight what he calls a "shaming" culture on the left.

Before the confrontation in Pittsburgh, Benjamin had been losing shows for months. In November 2017, the University of Connecticut canceled one of his comedy shows after Benjamin called an NPR host a child abuser for raising a gender-nonconforming child. And in February, he sang his "bike song" in front of a town hall in Saranac Lake, N.Y., where he lives, and he was eventually shunned by many in the town. The town supervisor even issued an apology in the local newspaper for allowing Benjamin to perform. According to a tweet from Benjamin, the New Hazlett was the fifth venue in the last several months to cancel his show.

Benjamin has been active comedian since 2006, with appearances on the prank TV show Punk'd and regular performances at The Improv comedy clubs in Southern California. Over the last few years, he has built up a large fanbase on the right, all while tweeting things that many would consider racist or anti-LGBTQ. Before his account was suspended, Benjamin was extremely active on Twitter, posting dozens of times a day. He had a bear emoji next to his Twitter handle, and called his fans #unbearables and sometimes referred to them as bears.

Bracey, who co-hosts the local Drinking Partners podcast, didn’t know who Benjamin was until a few weeks ago. A Drinking Partners listener and fan of Benjamin's contacted Bracey in a tweet after New Hazlett canceled Benjamin's show, according to Bracey. The listener wanted Bracey to help Benjamin find a new venue. After Bracey learned more about Benjamin’s act and social media presence, which is filled with racist and LGBTQ slurs, he tweeted a reply to the listener saying he wouldn't help. 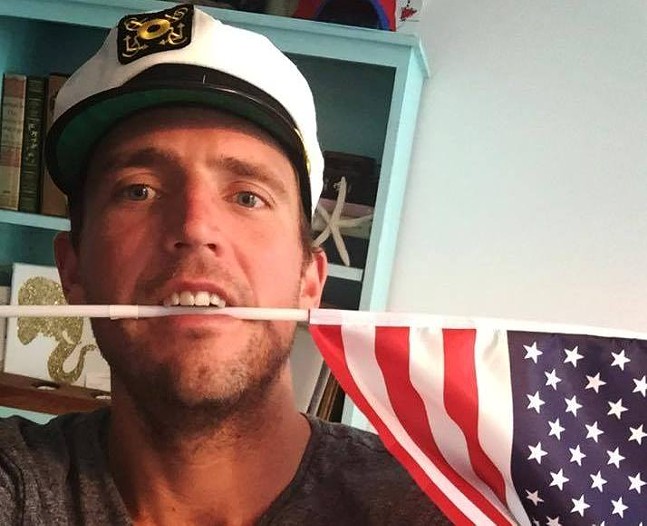 “I was not even aware I was replying to him,” says Bracey. “When he mentioned me, that is when the bears got into it.”

Bracey says Benjamin’s fans started insulting him relentlessly. Bracey says some of Benjamin’s followers called him a “shit comic” and a couple of people called him the n-word. Bracey says he realized then that Benjamin wasn’t just espousing a certain type of conservative comedy, he was amassing a “following of people.”

“This is beyond comedy,” says Bracey. “This is the alt-right movement disguised as comedy.” 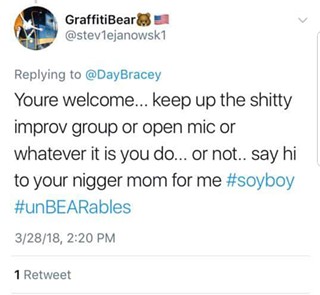 Image courtesy of Twitter
Screenshot of now suspended Twitter account insulting Day Bracey
Benjamin has ties to far-right agitators like Mike Cernovich and has been praised by conservative media outlets like the Washington Times. In March, Benjamin tweeted that “racism is a term used by socialists to discredit capitalists. It has nothing to do [with] skin color. I’m as black culturally as it gets. I’m a piano playing, baby making, money grabbing hustler [with] white skin. Commies are the [n-words].”

After his confrontation with Benjamin’s fans, Bracey posted on Facebook that he wouldn't work with anyone who worked with Benjamin.

Then things really got crazy.

Bracey says his Twitter timeline was inundated with thousands of mentions in the course of two days. Some people wrote that Bracey was infringing on Benjamin’s First Amendment rights and accused him “no-platforming” Benjamin, a term referring to when people are banned from sharing their opinions in public.

Bracey adds the story then got twisted, and many Benjamin fans believed that Bracey canceled the New Hazlett show.

The New Hazlett did not return a request for comment for this story.

But Benjamin posted a screenshot to Facebook on March 26 of an email from New Hazlett that cites the article about the Benjamin-related controversy in Saranac Lake, N.Y. and the New Hazlett email reads “this is a very serious issue for us.”

Benjamin then tweeted about trying to find a new venue, and this time, Bracey pushed back and tweeted, “I threatened your show. And these are just tweets. If & when you book a show, I’ll know, & I’ll make sure it doesn’t happen.”

CP communicated briefly on Facebook with Benjamin. He denies that his followers reported anything that led to Bracey getting banned. He wrote that it bothered him that Bracey was suspended since he is “a free speech guy.” But Benjamin added, that since he was also permanently banned from Twitter, Bracey can “chill the fuck out.” Benjamin did not respond to multiple requests for a telephone interview.

This isn’t the first time Bracey has been attacked on social media by far-right conservatives. In October 2017, CP reported about a conservative comic in Indiana County who put on blackface and posted a video mocking Bracey using a minstrel-like voice.

In a few tweets during the back and forth between Benjamin and Bracey, Benjamin linked the CP story about how Bracey has been the target of racist actions before, and acknowledges that that what was wrong. However, these tweets were easily drowned out by the hundreds of tweets directed at Bracey from Benjamin fans.

Bracey says losing his Twitter account is detrimental to his career in Pittsburgh, especially because he is throwing two local festivals coming up in August.

“The Twitter thing hurts,” says Bracey. “I was getting about 3 million impressions a month, that is huge for me.” Bracey feels it's particularly unjust because he says he was banned from Twitter for standing up to racists.

“I am not just a comic, I am black man, too,” says Bracey. “Off stage, this is human rights issue.”

Bracey says he hopes the Pittsburgh-comedy community will come together and reject Benjamin outright. He says it's important that Benjamin's brashness is met with an equally powerful message of acceptance. Bracey worries that without that, Benjamin will continue to build support and spread his views.

"While most comics don't agree with these alt-right views," says Bracey, "I feel they feel it's not their place to regulate the market, or actively police the scene. Which leaves an opening for extremists to exploit."

Image courtesy Facebook
Screen cap of New Hazlett email to Owen Benjamin
In a March 29 YouTube post, Benjamin said that he received his deposit back from the New Hazlett. Benjamin has performed in Pittsburgh before, notably at the Pittsburgh Improv in Homestead, but he laments in his YouTube post about his new struggles in securing venues. He feels that he is the victim in this situation and that there is an audience that wants to hear his comedy.

“I am getting so sick and tired of this shit,” said Benjamin on YouTube. “I don’t want my whole world being trying to find venues and getting attacked. I just don’t want this to be my thing.”

The Washington Times reported in December 2017 that Benjamin has had to alter his business model since venues started canceling his gigs over controversial comments on social media. “Now he asks fans in various cities to donate $20 for a ticket,” the Washington Times reported. “Once the total donations for an individual city reaches $3,000, Mr. Benjamin will rent a theater in that town and perform for his supporters.”

Benjamin posted on Facebook that he has secured a new venue to perform in Pittsburgh on April 28, but his website doesn't mention where. He says in his YouTube stream that he plans to film the Pittsburgh event and make the whole controversy between him and Bracey into a documentary.

"The left is functioning on shame," said Benjamin on YouTube. "That’s why I know the documentary would ice the local comedians. Most of this activism is done by failed art students, and they are so scared that they need to ruin other people’s art."

Bracey doesn't have much sympathy for Benjamin, nor does he buy Benjamin's argument that he is the victim. Bracey says it's ironic that Benjamin claims to be a First Amendment guy, but complains when venues practice their rights in canceling his shows. Bracey says when Benjamin espouses his far-right views as much as he does on social media, he can’t claim that it is just his comic persona.

“When you have hundreds and thousands of followers on social media and when you are promoted those things off stage, that is not a joke. That goes beyond the stage.”