“It’s always good to see people like yourself doing the same thing.” 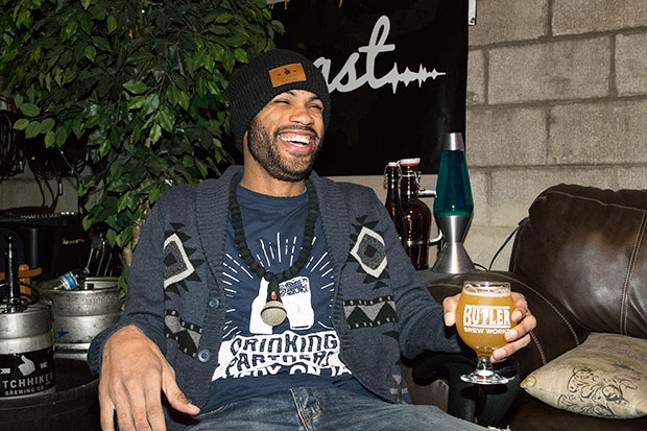 In many ways, the U.S. remains a segregated nation. Racism is systematic and it bleeds into every part of the culture. The craft-beer industry, liberal-leaning though it may be, isn’t immune, but there is a movement developing to help broaden the field.

“In any other subject there’s always that: the history of the nation. We gotta deal with it, and we gotta work at trying to change it,” says Mike Potter, creator and editor-in-chief of Black Brew Culture, an online publication about the craft-beer industry that will launch in mid-November. “One of the biggest components of what we try to focus on is recognition: exposure of people of color who are doing it [participating in beer culture], whether that’s aficionados, beer drinkers, brewers, owners — all of that is going to need some type of exposure and some type of voice in order for people to understand that that’s there.”

Potter first tapped into local craft beer in the mid-2000s, when he stumbled upon the East End Brewing Company when it was headquartered in a barebones space on Susquehanna Street, in Homewood that had the feel of an underground club.

“It was strictly aficionados and craft-beer people,” he says fondly. His curiosity led him into conversation with owner Scott Smith and the other patrons; his interest began to ignite. Now he travels to breweries out of state to find and drink new brews, and particularly to support black-owned breweries. He’s found several, including White Lion Brewery in Springfield, Mass.; Harlem Brewery, in New York; Union Craft Brewing, in Baltimore; Black Frog Brewery, in Toledo, Ohio; and Island to Island, in Brooklyn.

“That’s the handful we know of; there’s more, but those are the main ones. There’s not a lot, unfortunately,” says Potter. “It’s always good to see people like yourself doing the same thing. The more support you get, the better products you can make.”

The lack of people of color in all sides of the industry is what Potter is hoping to address. On his journey, he’s had what he describes as “a balance that I’m seeing with support and obstacles” in the larger beer community. One obstacle has been local staffing for BBC. A few people from Pittsburgh are on board, as well as writers from New York, Los Angeles and Atlanta. “The scene here is not as wealthy, when you’re talking about people of color,” says Potter. “It’s just not here as much. This is a national publication, so we have to go where the information and people are.” In creating this space specifically for people of color, Potter is aiming to increase interest in those communities, and in doing so pay respect to what those points of view can bring. “With new ideas, comes flavor. To me, that can only help the industry,” he says

Day Bracey is a Pittsburgh comedian and beer lover who decided to combine the two. “I got interested in craft beer before I got into comedy,” he says. “There was a beer distributor down the street. We had this thing where we would each buy a different case of something every week and share.” A friend who is a traveling photographer for the Pittsburgh Tribune-Review was really into craft beer and helped stoke Bracey’s interest by bringing back brews from other cities. Bracey and his friend and fellow comedian Ed Bailey started hanging out after sets in bars, drinking beer and discussing things, and were surprised when people gathered around to listen. They launched their podcast, Drinking Partners, in 2014. “We wanted to make people feel like they were having a drink with us,” says Bracey.

They started doing interviews with brewers and exploring brewery culture, and found that the people they were talking to in the industry often collaborated and supported each other. “They had this mentality in the community, which isn’t as prevalent in all artistic communities, that ‘all ships rise,’” he says. Bracey also noticed something else during their visits. “Typically, Ed and I are the only black people in any brewery we go to. We’ve been to a lot of breweries. We don’t see our people there,” he says. “I think there is a real effort in the community to be inclusive, but it is a little tougher to reach out to newer breweries, being a black man reaching out to unfamiliar white entities, to get a foot in the door.”

Bracey has also met resistance to craft beer inside the black community, which he mostly attributes to unfamiliarity. “We’re in such a weird cross-section of the city that’s dominated by white people, we don’t see a lot of black people in what we do outside of craft beer in general, in comedy, podcasting etc.,” he says. “Pittsburgh doesn’t have a strong black middle class.”

Bracey believes that having capital, familiarity and knowledge would help get more people of color into the craft-beer scene. “A lot of black people don’t want to go to a venue they aren’t comfortable in or where they will be a minority. It’s really tough,” he says. “Even me being welcomed into places and being in these [podcasts] all the time, it’s still intimidating being the only one there.”