Owen Benjamin is a well-known comedian in the conservative-media world. Benjamin is white and one of his signature bits is singing a song called “that [n-word] stole my bike.” Benjamin has defended his takes on race as tackling political correctness. He is a self-described critic of liberalism and left-leaning politics. In March, he tweeted “what a [n-word] queer” and linked a story about Canadian Prime Minister Justin Trudeau. Benjamin has said efforts to curb his brand of comedy are censorship.

In late March, the New Hazlett Theater canceled his stand-up event in Pittsburgh after learning more about Benjamin’s material and social-media presence. About a week later, Benjamin’s Twitter account was suspended after he tweeted about Parkland Shooting survivor David Hogg’s pubic hair. He had more than 180,000 followers on Twitter before his account was suspended.

But before Benjamin’s Twitter account was permanently suspended, he had a confrontation with Pittsburgh comedian Day Bracey, who had pushed back against Benjamin’s racist and anti-LGBTQ rhetoric. Bracey believes Pittsburgh venues shouldn't work with Benjamin, given his use of racial and LGBTQ slurs. But, in arguing with Benjamin and his legion of fans on Twitter, Bracey had his Twitter account permanently suspended, which he says is a big hit to his growing brand in Pittsburgh. Even so, Bracey is hopeful Pittsburgh will reject Benjamin's brand of comedy. But Benjamin has apparently found a new venue and he has cast himself as the victim of "activists" like Bracey. He hopes to use Pittsburgh to highlight what he calls a "shaming" culture on the left.

Tickets still remain for the Pittsburgh stop on Mike Birbiglia’s 25-city tour of his show The New One. 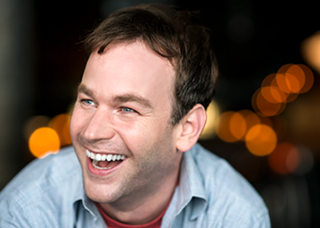 Photo courtesy of Evan Sung
The acclaimed actor and storytelling comedian is known for his wry, highly personal and artfully crafted one-man shows and comedy specials including Sleepwalk With Me, My Girlfriend’s Boyfriend and Thank God For Jokes. He is a frequent contributor to public radio’s This American Life.

The Byham Theater is located at 101 Sixth St., Downtown.

Photo courtesy of Alex Rosenfeld
CAKE Comedy, the touring collective of Carrie Gravenson, Abbi Crutchfield, Kaytlin Bailey and Erin Judge (it's based off their names), are taking a unique approach to booking their 2017 tour. Instead of using Kickstarter to mitigate tour costs, they're essentially using it as a box office. If they sell over $1,000 in tickets for a given city, they'll play the gig. If they don't, they won't, and nobody gets charged.

It's possible you haven't heard of CAKE, but it's a safe bet you've seen each of them somewhere. Back in 2012, they performed as the Pink Collar Comedy Tour and have stayed active performing and writing in the time since. Pittsburgh City Paper spoke with Kaytlin Bailey (the CAKE's "K") via email to discuss their strategy.

CAKE’s Kickstarter approach to booking this tour is a cool way to reduce financial risk and open a direct line to your fans. I like it. I’m curious, have you ever regretted giving to a Kickstarter? What was it and why?

I've given to a lot of Kickstarters, I love being a part of cool ideas! I've never regretted giving to a Kickstarter project but I wish I didn't have to use my crowdfunding budget to help with so many of my friends medical & personal emergencies! I blame the system, it's terrible that people have to solicit donations for chemo. Maybe Kickstarter could replace the NEA but it shouldn't replace healthcare!

Can you explain how this idea came together (to book the tour this way)?

I got drunk at a party hosted by Kickstarter & whined about how frustrating it is to put a tour together that is mostly AWESOME, but a few cities just don't work out. So we're running around barely breaking even because it costs money to produce these shows! I wanted a way to guarantee that every city hit a minimum break even amount, which for the 4 of us is $1,000. And Taylor Moore from Kickstarter said, "I think we can do that!" So we're giving it a shot.

How did you choose which cities you would (potentially) perform in?

We looked at a map. We knew we wanted to go through places we loved, like DC, Asheville & Raleigh, but we wanted to hit new cities too like Pittsburgh & Indianapolis!

If you were to add a new member, which first name initial do you think would work best? Would you want it to be CAKED? CAKER? CAKES? CAAKE? CAKEY? Or like a whole new word altogether?

I don't think we can afford a new member! Besides, where would be put them? Carrie & I use the middle seat to thumb wrestle.

What’s the right amount to drink before going on stage? Stone sober? A little tipsy? No limit?

All the CAKE girls are different but I like about one and a half drinks. I like to bring half a whisky on stage.

How do the four of you like to spend your off time on tour? I’m sorry this is a boring question.

We're all comics with a lot going on. Abbi is shooting the second season of Tru TV's You Can Do Better. Erin & I are both writers. Carrie headlines all over...so we're pretty busy. For fun Abbi does nail art, Carrie has a book club she's obsessed with, Erin does yoga & I rope strangers into awkward conversations at bars.

Anything you’d like to add that I didn’t ask about?

Come to the show! We're a delight & so funny! 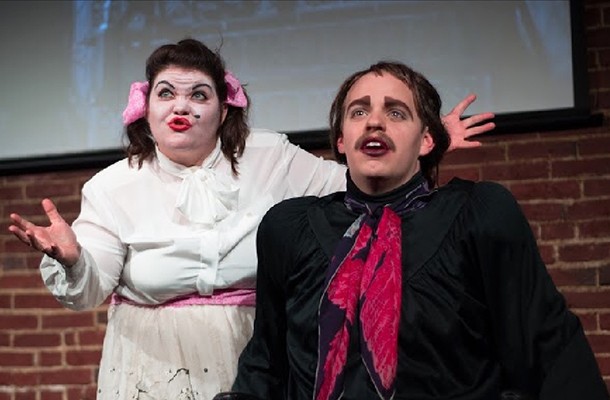 The show, which debuted at Arcade Comedy Theater during PrideFest 2016, adapts Whatever Happened to Baby Jane?, the famed 1962 drama starring Bette Davis and Joan Crawford. Davis plays a former child star who keeps her more successful sister, played by Crawford, a prisoner in their home after having run her over with a car decades earlier.

The show preserves the characters and iconic moments and costumes, but weaves them together “with improvised music crafted around a single audience suggestion.”

babyGRAND is composed of veteran locally based singers and actors Missy Moreno and Connor McCanlus. Moreno has toured with CLO’s Gallery of Heroes and worked with Chicago’s famed Second City comedy troupe. McCanlus has performed with Bricolage Productions, CLO Cabaret and Kinetic Theatre, and he runs the Pittsburgh Improv Jam.

What Ever Happened to babyGRAND? will be performed at 10 p.m. this Saturday at the CLO Cabaret Theater. The show runs 50 minutes.

The CLO Cabaret Theater is located at 655 Penn Ave., Downtown.

Tickets are $10, with two exceptions. Sketchville: After Dark, a surreal show at midnight Friday, costs only $5. And the 6 p.m. Saturday show, Sketchville: Beta Stage, is also $5 and will skew experimental.