Updated: "There Are Black People In The Future" text removed from East Liberty public-art project at behest of landlord | Blogh

Updated: "There Are Black People In The Future" text removed from East Liberty public-art project at behest of landlord 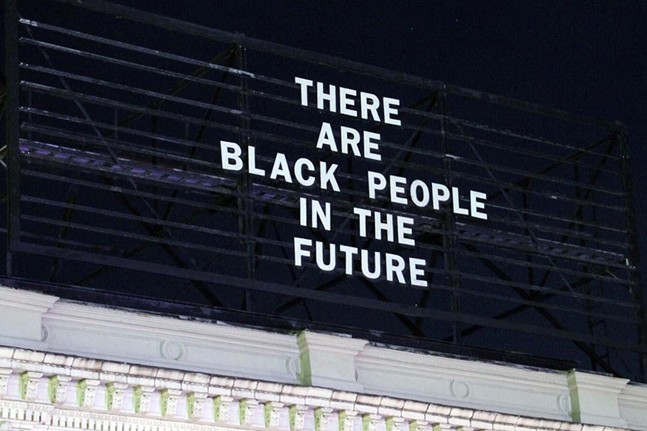 Photo courtesy of Alisha Wormsley
The removal of a message from a public-art project last week is stirring controversy in Pittsburgh.

The Last Billboard, created by Carnegie Mellon professor Jon Rubin, has been posting messages by local artists to a billboard on top of a building in East Liberty since 2013, but last week marks the first time the building's landlord intervened. "There Are Black People In The Future" was posted to the billboard on March 3 and removed several weeks later.

"Last week, The Last Billboard’s landlord, We Do Property, forced Alisha’s text to be taken down over objections to the content (through a never-before evoked clause in the lease that gives the landlord the right to approve text)," Rubin wrote in a statement on the project's website on April 3.

"I believe in the power, poetry, and relevance of Alisha’s text and see absolutely no reason it should have been taken down. I find it tragically ironic, given East Liberty’s history and recent gentrification, that a text by an African American artist affirming a place in the future for black people is seen as unacceptable in the present," Rubin continued in his statement.

The phrase was inspired by local interdisciplinary artist Alisha B. Wormsley, who has a video project by the same name. The video features found objects from Homewood. "I began collecting discarded and found objects, some, donated by students and elders in the community," Wormsley writes of the project on her website. "The ritualistic actions of casting and printing on these objects that ensued was directly entwined with Homewood’s existence and survival. And mine ..."

City Paper reached out to Wormsley, who provided images of the billboard but offered no comment.

The removal has struck some Pittsburghers as tone deaf and offensive, given the ongoing gentrification in the East Liberty neighborhood. Many on social media have questioned exactly what about the sentiment could merit its removal. The landlord has not made an official statement about the removal, though an unconfirmed letter from We Do Property's Eve Picker to Rubin has been circulating on Facebook and reddit. Public posts from Picker's Facebook page are receiving many comments stating "There Are Black People In The Future."

"Gentrifying development company that leased a billboard to an artist," wrote one Pittsburgher on We Do Property's Yelp page. "This company got some blow back from people saying the sign was racist. Not sure how anyone could construe that as racist."

Previous posts on the Last Billboard include "You Don't Need A Weatherman To Know Which Way The Wind Blows" from Bob Dylan's "Subterranean Homesick Blues;" "You Don't Have To Open Every Door. A Door Labeled Hell For Instance; and "Rachel Carson Is My Hero."

A panel discussion on the message's removal featuring Wormsley will be held at Kelly-Strayhorn Theater on April 18 at 4 p.m.

“These moments give us an opportunity to consider our values, both as individuals and as a community,” Kelly-Strayhorn's Executive Director, Janera Solomon, wrote on its website.

City Paper reached out to We Do Property for a statement but has not heard back. Updates forthcoming.

Update: On April 5, CP received a statement from Eve Picker, whose company manages the property. The full statement is below.


"One of my long-time tenants has been using this rooftop billboard for several years as part of an art installation. They recently posted a message based on the work of local artist Alisha Wormsley. In response to the installation, we were contacted by a number of people in the local community who said that they found the message offensive and divisive.

The tenant has posted messages in the past without seeking approval, but there has never been a community response about them being distasteful, offensive or political. Our objection is not with the message, but with the fact that people are offended as the result of a message we never saw and approved before-hand.

We are strong supporters of the arts, diversity, inclusion and conducting discussions to resolve conflicts. We suggested to the tenant that they sponsor and conduct a community discussion where all parties are invited, and we’ve been told there is now a public meeting scheduled for April 18. We will support whatever the community decides is in its best interests, as long as there is a clear direction coming from that meeting."

Update: On April 6, CP received another email from Eve Picker, stating that the original sign can be reinstated. Full statement below.

Over the last 24 hours, we’ve received a number of emails from people who said they are not offended by the sign and are saddened by its removal. They far outnumber the people who originally approached us about being offended.

We truly appreciate the comments from people who reached out to us in a respectful, thoughtful manner and believe the public has spoken. We are giving the tenant full approval to reinstate the original sign. In the future, we will follow the approval process outlined in the lease the tenant signed, so that we are all informed and on board for all future signs. 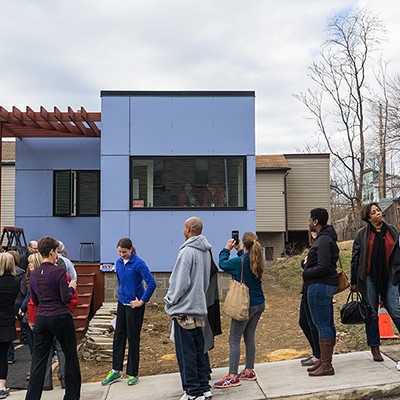