Garfield’s “tiny house” has a bigger price tag than expected

A tiny house will soon stand in Garfield. Unfortunately, its costs ended up being not so tiny.

Last November, City Paper reported how tiny houses might provide affordable single-family homes in blighted neighborhoods in Pittsburgh. But thanks to unforeseen costs, the expenses associated with the tiny house on North Atlantic Avenue have ballooned to more than $190,000, about twice what was initially expected.

“I am really disappointed about the costs. I think I am going to get hate mail about it,” says Eve Picker, CEO of cityLAB, the nonprofit building the tiny house.

And while much about building the tiny house was unique — it is, after all, the first of its kind in Pittsburgh — experts say that the inflated cost of building on vacant lots is a widespread issue, whether a home is miniscule or a mansion. 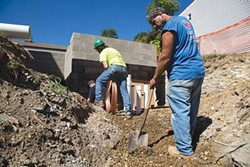 Photo by Theo Schwarz
Workers at the site of cityLAB’s tiny house, in Garfield

Tiny houses, while new to Pittsburgh, have been a growing phenomenon. They started out as alternative homes that were constructed on top of trailers (to skirt zoning laws), but are now being constructed as legal homes. Nationally, some cities are considering adjusting their minimum-square-footage requirements, paving the way for tiny houses with cinder-block foundations that are hooked up to utility grids.

The Garfield tiny house, thanks to zoning variances granted for its lot, will be anchored to a foundation and have typical amenities: water, sewage and electricity. The one-story, 350-square-foot home will also include a bathtub, two mini-fridges, a stove, a 24-inch dishwasher, a washer/dryer combo and a small front porch.

The original project cost was about $100,000. Major factors increasing the price tag included the high cost of site preparation, says Picker. She says CityLAB excavated the lot to remove the remnants of a collapsed home and dug a 12-foot-deep trench to separate the sewage line from the property’s stormwater runoff, to comply with the federal Clean Water Act. Because the project is the first of its kind, costs associated with the zoning variances were also higher than expected. Such additional expenditures totaled about $50,000, says Picker. She later learned that such costs are not uncommon among projects on deeply distressed lots.

“You are pretty likely to have the same exact costs; you have to pull [all the debris] out,” says Picker. “Most sites in Garfield are going to have this same problem. Any neighborhood with abandoned properties will have this problem.”

Additionally, Picker had costs that wouldn’t accrue to someone building his or her own house, including $15,000 for a developer fee to market and sell the house.

Such site-prep costs are typical for new homes on most vacant lots, agrees Rick Swartz, executive director of the Bloomfield-Garfield Corp. Swartz says that the BGC recently built a normal-sized home on a vacant lot for $237,000, but was able to sell it for only $143,000.

Swartz says the high upfront expense means that new homes in blighted neighborhoods cost well over what the market will bear. With all the news about Pittsburgh’s growth and livability, Swartz sees this issue as “a crisis that gets overshadowed by the city’s transformation.”

“There is a hard decision that is facing the city the next couple years,” says Swartz. “Historically, we have relied on state and federal funds to revitalize city neighborhoods. There has been a 30 to 40 percent decline for federal funding regarding housing over the years. The city is going to have to think about taking a dedicated portion of funding to help fund the infrastructure costs.”

Instead of building new, prospective homeowners might want to consider renovating existing buildings, Swartz says. He says that renovating can be accomplished for about $90,000, on average. Swartz  recommends finding homes that have been vacant for less than three years.

Bethany Davidson, head of Pittsburgh Community Reinvestment Group’s vacant property working group, agrees. She says that it costs 40 percent less to renovate than to build from the ground up.

However, finding such salvageable properties is not easy. Davidson says that more than 25 percent of parcels in Pittsburgh (whether built on or not) are classified as distressed. This means they are either physically distressed (suffering everything from chipping paint to complete structure collapse) or economically distressed (for example, tax delinquent). Most fit into the former category, she says. 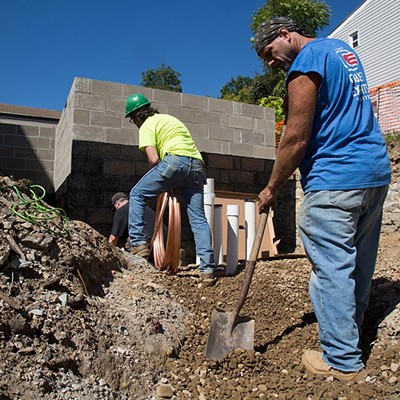 Davidson says the goal is to stabilize distressed properties to ensure they do not fall into disrepair, thus costing developers tens of thousands of additional dollars. She adds that the city receives federal funds to stabilize city-owned blighted lots. (Privately owned blighted lots are also a big problem, but mostly out of the city’s hands.) But there is only so much the city can accomplish to save its thousands of abandoned homes.

“Despite their best efforts, there is never enough funding to go around,” says Davidson. “[The city] has to focus on triage and public safety first.”

Representatives of the mayor’s office did not return calls seeking comment on the city’s property-stabilization efforts.

City programs exist to aid buyers of abandoned homes. Davidson says individuals can apply for a tax abatement associated with certain designated districts, grants from the city’s Urban Redevelopment Authority to refurbish a home’s façade, and sidewalk-reconstruction reimbursement programs. She also says individuals can apply for a consolidated loan through the PCRG, in partnership with local banks and the URA, which handles purchase and renovation under one loan.

Pittsburgh’s Land Bank is also beginning work to combat the problem. Its goal is to make it easier for developers, community groups and neighbors to fix up blighted, abandoned properties. Pittsburgh City Councilor Ricky Burgess, chair of the land bank, says it is in the process of procuring funding for a staff. Once funding and a staff are established, says Burgess, the bank will focus on gathering up vacant parcels and maintaining them.

However, Burgess says, the cost to build on the properties will be on the developer, “at least for now.”

For Picker’s part, to recoup her costs on the tiny house, she says, the property must sell for about $100,000. That’s much higher than she wanted, but lower than it could have been, thanks to grants and donations totaling around $90,000 from contributors including the BGC, the URA and IKEA. Through Picker’s new equity crowdfunding site smallchange.com, funds are currently being raised to cover the remaining amount of the construction loans. As of press time, the website has raised $37,000 of the $100,000 from eleven investors.

URA chair Kevin Acklin says that the city was happy to invest in the tiny house and that it was a “great pilot” for an effort at a sustainable home. “It was worth the investment,” he says. “whether it is scalable, is yet to be seen.”

While Picker is not happy with the tiny house’s price tag, she says she still wants to pursue the tiny house as an affordable model for blighted neighborhoods. But she says that she might change her development strategy.

“I am pursuing up to six tiny houses on three lots, trying to get them on one parcel,” says Picker. “That way the site preparation cost is lower per house.”