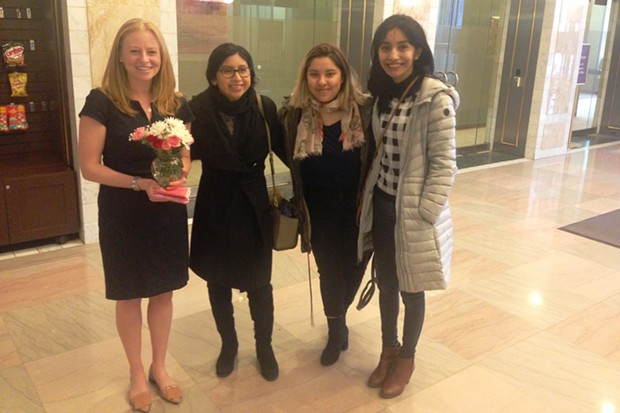 CP photo by Ryan Deto
Liz Fishback (left), of Sen. Bob Casey's office, with Dreamers Lesly Moran (center-left), Hortencia Ortiz (center-right) and Ana Alberto (right)
The immigration debate in the U.S. Senate has begun, and it already looks like a standalone bill to grant recipients of the Deferred Action for Childhood Arrivals (DACA) a path to citizenship is off the table. DACA recipients, also called Dreamers, are undocumented immigrants who were brought to the U.S. as children, and have since been given temporary-protected status and are allowed to legally work in the country.

This week, starting on Mon., Feb 12, the U.S. Senate opened up the floor to allow debate on a number of immigration issues. By and large, Democrats are looking to provide protections and a path to citizenship for Dreamers, and Republicans are looking to bolster border security and reduce the number of immigrants entering the U.S. through family reunification (in which immigrants can sponsor family members to join them in the U.S.).

But instead of starting with that debate, Pennsylvania Sen. Pat Toomey (R-Lehigh) proposed an amendment to defund so-called “sanctuary cities,” municipalities that limit communication and cooperation with U.S. immigration officers. The Atlantic Monthly reported on Feb. 13 that Senate minority leader Chuck Schumer (D-New York) struck down Toomey’s amendment and complained it “does absolutely nothing to address DACA, does absolutely nothing to address border security.”

(It also should be noted that in 2016 when asked if he supported a path to citizenship in concert with ending sanctuary cities, Toomey told City Paper that those were “separate” issues.)

Although the Senate’s immigration debate is off to a rocky start, Pittsburgh-area Dreamers are still hopeful their needs will be met. On Feb. 14, three local Dreamers delivered letters to the Pittsburgh office of Pennsylvania Sen. Bob Casey (D-Scranton). Ana Alberto, Lesly Moran and Hortencia Ortiz are DACA recipients and are asking Casey to protect DACA and to pass a clean Dream Act, meaning a path to citizenship for Dreamers without any attachments like increased border security.

“We want DACA to stay,” said Alberto in the lobby of 310 Grant St., Downtown. “We are scared that [the government is] going to get rid of it. This is our home, and we want to stay. I see myself buying a home here and starting a family.”

Alberto, 24, was brought to the U.S. from Mexico when she was 10 years old, and she currently works as a hairstylist. Her DACA status will expire in October, and she is growing increasingly worried that she will be deported when that happens.

“We are running out of time,” said Alberto.

Lesly Moran, 22, came to the U.S. when she was 8 years old from Ecuador. She recently graduated from Duquesne University and has been reluctant to accept job offers because she’s afraid she will have to “bail on them, if I don’t get new [DACA] documentation.”

Moran also said that the pathway for citizenship for her parents is important too, because she wants them to be able to stay with her in America and doesn’t want a new immigration law that would “criminalize her parents.” However, this appears to be already happening. President Donald Trump changed the guidelines for U.S. Immigration and Customs Enforcement officers in January, and now all undocumented immigrants, except for those with valid DACA paperwork, can be detained by ICE.

“We can’t live our lives while constantly worrying about [our parents],” said Alberto. “Everyday is filled with uncertainty.”

Ortiz, 18, came to the U.S. from Mexico as a 3-year-old, and she is hopeful that Sen. Casey will help educate Pennsylvanians about the country’s immigration system. She said that many people think she is a criminal. But those people don’t understand that to receive DACA, she must either be be working or attending school and can't be involved in any criminal activity. Most importantly, Ortiz says a path to citizenship is important for her because she considers Pennsylvania her home.

“This is my home,” said Ortiz. “It would be very tough for me to leave.”

After receiving the letters from the three Dreamers, Casey sent a statement to CP indicating he will work toward a path to citizenship for Dreamers.

“Congress must get serious about real immigration reform by passing legislation that secures and surveils our border, protects American workers and their jobs, and provides a pathway to citizenship for those who are law-abiding and learn English,” wrote Casey. “Congress must also keep our government’s promise to Dreamers and pass protections without delay. The Dreamers are law-abiding, English-speaking young people who were brought to our nation as children. They pay taxes and support themselves, and some have volunteered to serve in our military.”

Casey didn’t mention if he supports a path to citizenship for the parents of Dreamers, but is hopeful that a comprehensive immigration-reform bill will come out of this process. However, he cast blame on Republicans and Trump for solely focusing on the deportation of undocumented immigrants.

“Unfortunately, my Republican colleagues and President Trump seem to think that the best way to deal with immigration is to just deport everyone,” wrote Casey. “And, the administration, through its reckless actions, has endangered our government’s promise to Dreamers.”

It's the most wonderful time of the year! Happy fish-fry season!