“I am less concerned about the title versus the substance of those bills.” 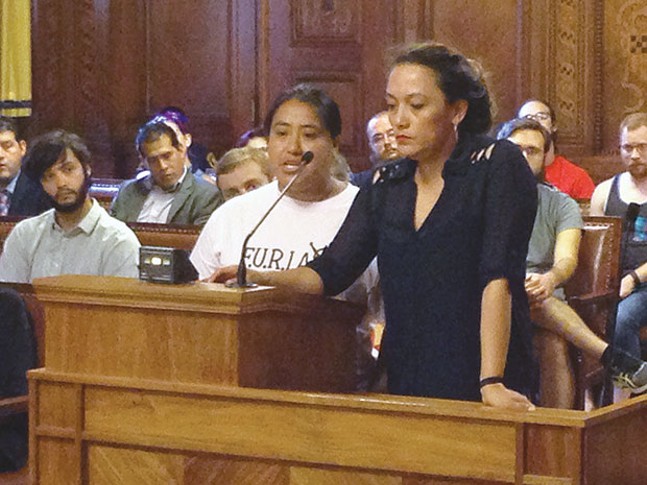 Just as President Donald Trump started his term in January, members of Pittsburgh City Council passed a series of bills meant to make Pittsburgh more welcoming and to hopefully calm the fears of undocumented immigrants about being deported. The city wanted to show that it can pass policies that are pro-immigrant, but some local immigrants feel like the new laws aren’t doing the job of actually protecting them.

On Jan. 17, just three days before Trump took office, Pittsburgh City Councilor Dan Gilman (D-Squirrel Hill) introduced his City for All agenda “aimed at making Pittsburgh a more welcoming and inclusive city,” according to a press release. This package of bills was signed by Mayor Bill Peduto on Jan. 31, and included an ordinance prohibiting Pittsburgh from denying services based on immigration status; resolutions to create a citywide language-access plan; and a police office of multicultural affairs to accommodate immigrant needs.

But many in the city’s Latino community, as well as in immigrant-rights groups, say these bills weren’t enough to assuage their anxiety. They want Pittsburgh to invoke “sanctuary city” status to protect law-abiding undocumented residents, but council believes the city has enough policies in place to accomplish the same goals. Sanctuary cities limit communication and cooperation with U.S. immigration officers as a way to build trust between immigrants and local police.

This disconnect between immigrant advocates and city officials was exemplified during a July 12 public hearing sponsored by concerned citizens. Brenda Solkez, of immigrants-rights group FURIA, spoke at the hearing about how Pittsburgh’s Latino undocumented immigrants were growing increasingly anxious about being deported and were scared to speak to city officials. Pittsburgh City Councilor Deb Gross offered assurances.

“It doesn’t matter what your immigration status is, you may speak here,” Gross told the group. Problem was, council didn’t provide a translator for the group of more than a dozen undocumented immigrants, many of whom only spoke Spanish.

Solkez eventually translated for the women wishing to speak, but the message was sent: Even as Pittsburgh officials want to ensure immigrants are welcomed and protected, their message of support isn’t reaching the entire undocumented community.

Councilor Gilman says the legislation he sponsored gives all city residents, regardless of immigration status, equal rights and access to city services and will eventually lead to improved relations between police and immigrants. But immigration-policy experts say with the U.S. Immigration and Customs Enforcement (ICE) increasing its arrests, cities may want to step up efforts to protect resident immigrants. Local advocates like Solkez are calling on the city to pass broader legislation.

Gilman says his legislation, in combination with the Pittsburgh Police policy to not initiate contact with ICE officials, is currently adequate to serve the city’s undocumented residents. He is open to additions and changes, but rejects the idea of the city declaring itself a sanctuary city.

“I worked for a long time with the community, immigrants and refugees on those bills,” Gilman says. “I am less concerned about the title versus the substance of those bills.”

But since that passage of those bills, Avideh Moussavian, senior policy attorney for the National Immigration Law Center, says federal immigration enforcement has been ramped up significantly.

“This administration is dramatically going after anybody who might fit the description of being undocumented,” she says.

According to a May USA Today article, in the first three months of the Trump administration, immigration arrests were up 38 percent compared to the same time period in 2016. And Solkez says this is happening in Pittsburgh too.

“What ICE is doing is savage,” says Solkez. “They are picking up people, they are following people, they are going around to schools.” Pittsburgh City Paper spoke with a group of six undocumented immigrants who attended the July 12 public hearing. Most live in Beechview, and they said this increased ICE presence is causing them anxiety. One mother of two said, “No, I don’t feel safe,” in Spanish.

Moussavian says cities around the country should respond to this increased enforcement by making more effort to protect law-abiding undocumented immigrants.

According to estimates, about 4,500 undocumented immigrants live outside Pittsburgh in Allegheny County, and it’s unclear if any other county municipalities have any immigrant protections on the books.

Gilman says Pittsburgh could increase its outreach to better calm immigrants’ anxieties and inform them of services that are available. “The number-one thing that I took from the public hearing is we need to double down in terms of outreach,” he says.

And Solkez says she will continue to pressure the city and other regional agencies.

“This is our fight, and we are going to keep fighting,” says Solkez. “I don’t want to diminish any other immigrant groups, but I believe the undocumented immigrants are the most vulnerable right now. … If it has to be a civil-rights movement, let’s do it.”