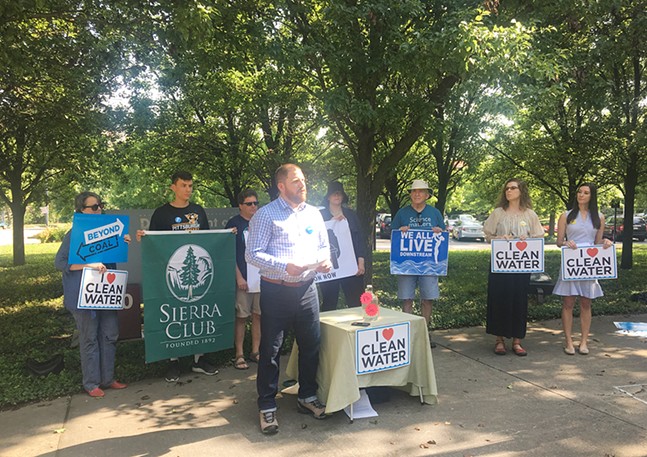 CP photo by Haley Frederick
Activists at the Department of Environment Protection
The Sierra Club and concerned local residents gathered last week at the Department of Environmental Protection (DEP) to urge Gov. Tom Wolf and the DEP to take action by renewing the expired permits at Pennsylvania power plants, and to announce that the Sierra Club has filed suit against the DEP in commonwealth court. Speakers presented a jug of water from the Allegheny River, which they said is of particular concern due to the Cheswick plant, which is the subject of the lawsuit.

“I’m here on behalf of our 130,000 members and supporters in Pennsylvania to demand that Governor Wolf and the Department of Environmental Protection meet their legal obligation to protect Pennsylvania residents from toxic pollution entering our streams and rivers from coal-fired power plants,” said Patrick Grenter, senior campaign representative with the Beyond Coal campaign of the Sierra Club.

The Cheswick coal-fired power plant has been in operation since 1970. It is located in Springdale, upstream from the Pittsburgh Water and Sewer Authority facility on the Allegheny River, which is a source of drinking water for more than 300,000 people. The plant releases toxic pollutants like lead, arsenic and mercury into the river.

“A recent report found that Cheswick released 387 pounds of lead into the Allegheny River in 2015, and the discharges in 2016 appear to be even higher. This makes it the fourth worst power plant in the country for lead pollution,” said Chelsea Holmes, director of community education at Women for a Healthy Environment.

Cheswick’s 2007 permit expired on August 31, 2012. “These Clean Water Act permits are required to be reconsidered and renewed every five years. The plant has outdated permit controls for selenium, mercury, bromide and lead,” Grenter said. Before 2015, a limit on the amount of toxic heavy metals that power plants could dump into waterways did not exist. Since Cheswick has not been issued a new permit since 2007, they are still operating above the federal limits set in 2015. The new rules will not affect the plant until its water-pollution permit is renewed.

The high lead levels in Pittsburgh’s drinking water have become a major issues for the public. “Lead is a known neurotoxin. It is especially dangerous to expectant mothers and young, developing children. It can cause behavioral problems and lower IQ,” said Beth Shaaban, co-founder of Pittsburgh Lead Action Now. “It doesn’t readily break down, so your exposure is cumulative. Lead exposure is good for neither wildlife nor people.”

Due to its failure to renew the permit in a timely manner, the Sierra Club has filed suit against the DEP in the Commonwealth Court of Pennsylvania. Cheswick is just one of 11 power plants in Pennsylvania operating under expired permits.

“It is imperative that Governor Wolf act now. Donald Trump is attempting to dismantle environmental protections as quickly as he can get his hands on them. He withdrew the country from the Paris Accords. He walked away from important standards like the Clean Power Plant and Stream Protection Rule,” said Grenter.

NRG Energy spokesperson David Gaier sent Pittsburgh City Paper the following statement in response to the claim that the Cheswick plant is "still operating above the federal limits set in 2015":

"That is incorrect. In 2015, EPA issued revised permitting guidelines for power plant discharges. Recently, those guidelines have been pulled back for reconsideration by EPA. However, Pennsylvania’s state-mandated water quality requirements, which PADEP uses to develop limits for water discharge permits that it issues, are still effective and ensure that discharges from sources such as power plants continue to be safe for aquatic life and human health."

The statement goes on to address concerns about lead risk associated with the plant:

"Health risks from lead and other elements mentioned are simply not coming from the Cheswick plant. The discharge of the Cheswick plant to the Allegheny River is far, far lower than the maximum level that the EPA says is safe, called the “action level.” This is even before the discharge is massively diluted by the river itself. NRG is not only in full compliance with its water permit, but, again, is performing far better than required.

Directly to the point, The Pittsburgh Water & Sewer Authority (PWSA) has said that drinking water contains virtually no lead when it leaves the treatment plant, and estimated that 20 to 25 percent of its customers get their water through lead lines. PWSA has stated many times that the service water pipelines are the source of lead contamination. In February of this year, PWSA also issued a pamphlet that cited the following, specifically, as the sources of lead in drinking water: lead service lines, lead and galvanized pipe, copper pipe with lead soldered joints, and interior plumbing fixtures.

If the Sierra Club wants to address the actual problem, they should focus on the source of lead contamination in drinking water, namely lead pipes and fixtures, and follow the guidance provided by PWSA to reduce exposure to lead in drinking water." 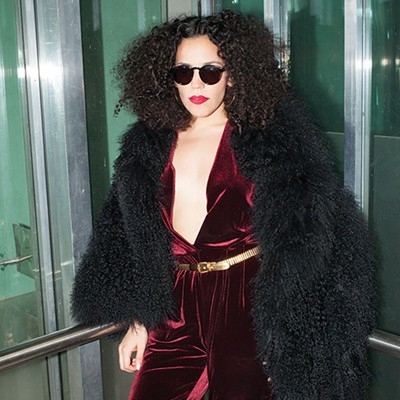