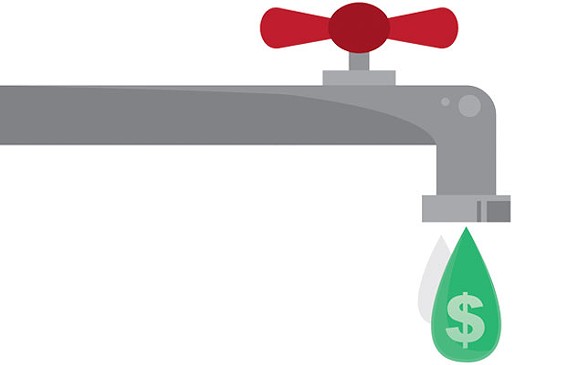 Right now, Pittsburgh Mayor Bill Peduto is looking into restructuring the Pittsburgh Water and Sewer Authority amidst complaints of high lead levels in Pittsburgh drinking water. While many believe restructuring is necessary to right the ship, it’s clear that the authority’s problems cannot be fixed without significant financial investment.

In fact, a large part of the problems PWSA is facing have been caused by decreased investment in water systems. Federal funding for water has declined since the 1980s, leaving state and municipal governments scrambling for resources as the costs of maintaining those systems rises.

Like PWSA, many municipalities have undertaken cost-saving measures that put water quality at risk. Many have put off costly capital-improvement projects to address deteriorating infrastructure. And poor financial decisions have led to high debt.

Often these factors translate to higher costs to consumers. Over the past three years, PWSA’s prices have risen by 20 percent.

Pittsburgh stakeholders are currently working to address the financial viability of the authority by tackling immediate lead concerns and debt. Below is a rundown of what those involved in the issue are doing.

Right now, the city is replacing only those portions of lateral lead service that are on public property because it says state law prohibits it from replacing homeowners’ portions of the lines. Fontana’s legislation would amend the state Municipal Authorities Act to allow the city to use public money to replace the private lateral lines, and it would help local government access the funds necessary for replacements, estimated to cost more than $25 million. This includes giving local governments access to state grants and loans.

“Right now there’s a concern about lead in the water, so we want to give people peace of mind,” Fontana says. “It makes no sense not to do the lateral and the main [lines] at the same time. You can do it for a much cheaper price.”

Many don’t believe the cost of lead service line replacement should come from public funds. Last year, PWSA filed a lawsuit against Veolia Water North America, whom many blame for the city’s current lead levels.

Veolia was contracted by PWSA in 2012 to cut costs at the authority. PWSA claims that while under contract, Veolia changed the chemical used to control corrosion in lead service lines without proper notification, and that the change resulted in lead leaching into the city’s water.

“Despite receiving significant sums from PWSA, Veolia failed to perform as required. This failure has resulted in significant damages to PWSA and left the Authority in a worse position than when Veolia was engaged,” PWSA Chairman Alex Thomson said in a statement.

PWSA is seeking damages not expected to exceed $12.5 million, which would be about half of the estimated cost of repairing the city’s lead service lines. This isn’t the first time the international company has been sued; it is currently also facing a lawsuit from the Michigan Attorney General, who claims Veolia is partly to blame for Flint’s water crisis.

Addressing PWSA’s larger financial shortcomings, including massive debt, is key to the authority’s future. Today, PWSA faces more than $750 million in debt, and last year it spent $54 million servicing it.

The current high debt can be traced to 2007, when the authority entered into a more than $400 million deal involving the swapping of variable-rate bonds to get lower interest rates. Such swaps have been criticized as a form of predatory lending. Unfortunately, this deal was made just before the global financial crisis. According to ReFund America, between 2007 and 2014, the deal cost PWSA $113 million in net interest payments and termination fees.

“PWSA was hit particularly hard,” says Aly Shaw, an organizer with Pittsburgh’s Our Water Campaign. “They lost a little over $100 million and still have about $100 million in early-termination fees that they could potentially still pay.”

ReFund America is a national organization that looks at how the Wall Street collapse during the financial crisis contributes to public budget distress like that suffered by PWSA. ReFund America is working with governments in cities, like Baltimore, whose water system has been hit by predatory lending. Shaw hopes Pittsburgh will take a similar initiative.