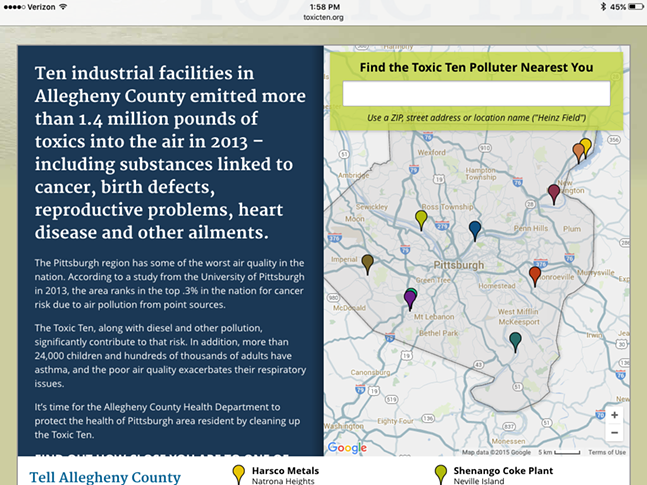 After typing in an address, the website user can see how many miles away his or her house is from each of the ten industrial sites.

"This website will allow residents to learn more about the potential impacts on their health and how they can help ensure these facilities are cleaned up," said Stephen Riccardi of the environmental advocacy group PennEnvironment.

The organization rolled out the website in conjunction with the release of its "Toxic Ten" report written with the policy organization Frontier Group and funded by the Heinz Endowments and the Colcom Foundation.

According to the report, "more than one in three Allegheny County residents lives within three miles of those 10 facilities."

The authors used the Environmental Protection Agency's scoring system called the Risk-Screening Environmental Indicators model, which takes industry-reported data (basically, which substances and how much were released over a period of time) and analyzes it against the risk factors posed by those substances — as defined by EPA and the Centers for Disease Control and Prevention. The report listed four categories of potential health effects: cancer and issues with the cardiovascular, nervous and respiratory systems.

"This report offers a clear picture of where the responsibility lies," said Riccardi at the press conference releasing the report and rolling out the new website.

The ten facilities ranked in the report include:
click to enlarge

Marty Garrigan, of Springdale, talked about his experience living near the Cheswick Power Plant.


"I cannot prove that my father died of a heart attack at 68 because of pollution. I can't prove that my mother was on an oxygen machine for years and died from heart disease, and I can't prove that my daughter has asthma from the [facility]," said Marty Garrigan, a resident of Springdale who lives near the Cheswick Power Plant. "But it is a  known fact that many studies correlate the dangers of toxins released from these power factories."

Marti Blake, of Springdale, says she lives across the street from the Cheswick Power Plant. She showed photos of soot on her porch furniture.
In March, City Paper reported on pressure from activists on the Allegheny County Health Department to tighten Cheswick's permit. The permit expires at the end of this year.

The report contends that Cheswick only "minimally" operates one of its two main pollution control devices. David Gaier from NRG, the company that owns the facility, said in an email that it's in compliance with the EPA's standards and is "meeting or actually improving on the requirements of its (Title V) air permit in all aspects." Gaier also says the company is "approaching half a billion dollars" in investments in environmental controls at Cheswick.

In May, CP also reported on ACHD's efforts to bring McConway & Torley's permit up to date, an action that stirred controversy in the Lawrenceville community.  The health department is conducting tests to understand how much pollution the foundry emits into the neighborhood before it issues a new permit. Jim Thompson, the health department's deputy director, says "there are still final issues to be resolved in the testing protocol” for the second round; the first round finished in June.

The report's authors are calling on the Allegheny County Health Department officials to "issue new permits or revise existing permits to ensure Pittsburgh area residents are not continually exposed to dangerous levels of toxic air pollutants."

When asked about the request health department Director Karen Hacker told CP in an emailed statement: "The Health Department's Air Quality Program is committed to protecting the health of the residents of Allegheny County. While progress has been made on air quality, there is still work to do. We're constantly monitoring these large industries for compliance and taking appropriate enforcement actions when they are found to be out of compliance with EPA emission standards."

"They have the ability to up the regulations. The EPA sets the floor. Why don't they improve on the regulations for us? They can do that if they have the will. I don't think they have the will." said Thaddeus Popovich, a Ben Avon resident with the group Allegheny County Clean Air Now. His group advocates for better regulations at the Shenango Coke Plant. He said he and his group meet regularly with ACHD, and they have invited the EPA's regional office to Pittsburgh for a Nov. 19 meeting at the Community Presbyterian Church of Ben Avon.

"We're hoping that applying pressure with the EPA in town will help," Popovich says.

Residents can view the top ten polluters at www.toxicten.org.