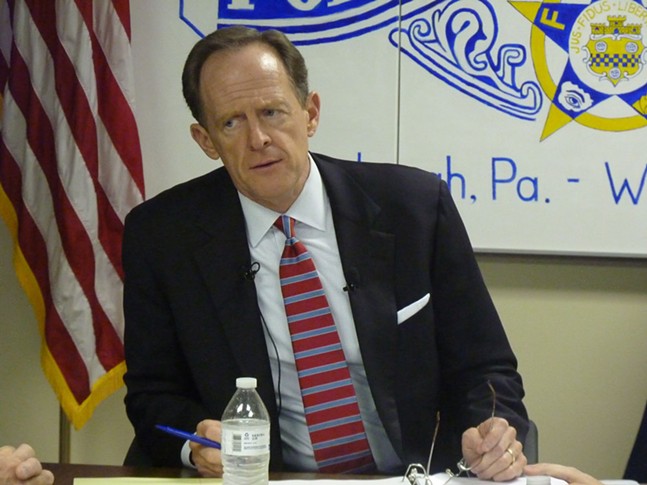 CP photo by Ryan Deto
Sen. Pat Toomey
It’s been a bad week for U.S. Senator Pat Toomey. Pennsylvania’s Republican Senator from Lehigh County went on a Philadelphia television news show and defended some of his stances, like how he believes Roe V. Wade, the Supreme Court decision making abortion legal, was the wrong choice, but was mostly confronted with repeated requests from the show’s hosts, asking him if he was going to vote for Republican presidential candidate Donald Trump.

“I will give you credit for serious persistence,” said Toomey on Fox 29 Philadelphia.

Toomey said on the show that voters care more about his stance on security and economic issues than whether he endorses Trump. “I don’t think they care nearly as much as you guys do,” said Toomey to the hosts.

And on top of the all the Trump questions, Toomey has been getting for the past two months, and the consistent TV attack ads about his Wall Street background, Toomey has a new attacker.

On Nov. 3, the National Association for Gun Rights harshly criticized Toomey for his past effort to pass background check legislation in 2013 (the bill came up short and failed to clear the Senate). While Toomey has been avoiding any semblance of an allegiance toward Trump, the NAGR is actually more worried about the possibilities a Toomey-Clinton alliance would have towards gun rights.

“The prospects of a new Clinton-Toomey gun control deal next year are too big for gun rights supporters to ignore,” said NAGR President Dudley Brown in a press release. “That’s why we’re encouraging our members to urge Toomey to abandon his anti-gun positions right now. It simply cannot wait.”

All of this and six polls released this week show Toomey trailing his Democratic opponent Katie McGinty, including a Franklin and Marshall College poll that has McGinty up by 12 points. At a Nov. 3 press conference in the Allegheny County Courthouse, Braddock mayor and McGinty surrogate John Fetterman said Toomey is withering away this week.

“The polls show there is a wave of good judgement among Pennsylvanians right now,” said Fetterman at the press conference. “Pennsylvania voters are coming home and deciding whose side the they are on.”

Representatives from Sen. Toomey's campaign did not respond to request for comment by press time.

Music To Sweep To 07: Songs Of A Dead Dreamer