“I fear this is the effect of Donald Trump on our political discourse. It now feels like a school cafeteria.” 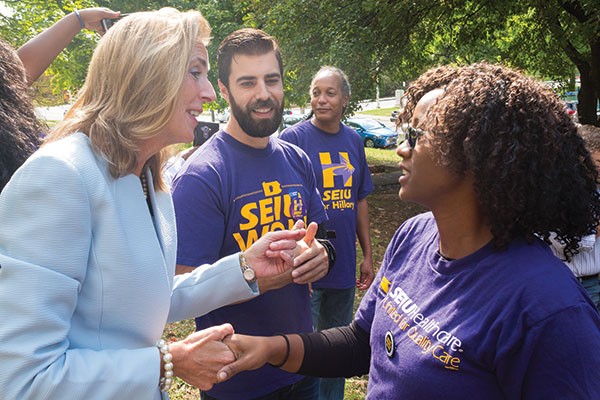 On Oct. 12 at the Fraternal Order of Police Lodge One in Beechview, a campaign spokesperson for Republican U.S. Sen. Pat Toomey addressed the waiting group of reporters. “OK, the senator is going to talk about police issues for about 30 minutes, and then you can all ask him questions that have nothing to do with that,” said Steve Kelly.

He was right. After Toomey talked with police-union reps, he spoke to reporters who asked one quick question about his police-friendly legislation and then proceeded to press the senator about whether he endorses Republican presidential candidate Donald Trump. (This press conference was held a few days after Access Hollywood released a videotape of Trump saying he kisses and gropes women without consent.)

“As soon as the tapes came out, I said, ‘This is completely unacceptable, and I don’t think this is ordinary conversation that can be easily overlooked,’” Toomey said. “I am simply observing that this is not a referendum on one person.”

Toomey, as he has for months, said he’s still “waiting to be persuaded” and continued to avoid giving a definitive answer on whether he supports Trump. Katie McGinty, Toomey’s Democratic opponent, was quick to jump on the senator’s non-committal.

“More and more women are coming forward with proof that Donald Trump sexually assaulted them,” said McGinty on Oct. 13, “and Sen. Pat Toomey, even in the face of all this, still refuses to denounce Donald Trump.”

Since late June, McGinty has sent dozens of campaign emails attempting to link Toomey to Trump and has asked him to denounce Trump. Toomey has never committed to an endorsement of the Republican nominee. 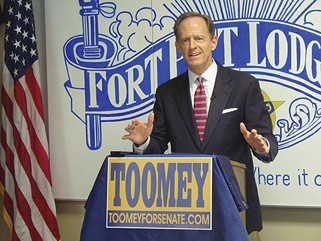 But this has been the tenor of the race, with both candidates trying to tie their opponent to controversial stances on hot-button issues. The campaigns are using malicious attacks while avoiding deep-policy discussions — a mirror image of the presidential race that has loomed like a specter over Pennsylvania’s main contest. Outside organizations are attempting to focus on important issues, but their messages might be missed, thanks to a race that’s filled with nonstop noise.

Candidates have even resorted to name-calling: To McGinty, Toomey is “Fraidy-Pat” and Toomey calls McGinty “Shady Katie.”

According to an estimate from media consulting company, Kantar Media, television stations in Pennsylvania have aired more than 22,000 ads for the Senate race, the most Senate-race TV ads of any state. These ads are mostly negative and include broad attacks, such as stating that McGinty supports “welfare for illegals” or that Toomey is “in love with Wall Street.”

Stephanie Ann Martin, a communication professor at Southern Methodist University, says it may be Trump’s early success in using offensive rhetoric that has led other campaigns to follow suit. “I don’t think this is normal,” says Martin, referencing the name-calling in the Senate race. "I fear this is the effect of Donald Trump on our political discourse. It now feels like a school cafeteria."

During an Oct. 17 debate on KDKA, even the candidates cited the enormous amount of advertisements when asked a question about campaign financing. “I am staggered by all these negative ads. It is getting hard to watch TV,” said Toomey.

Minutes later at a commercial break, four straight Senate-race ads (two for Toomey, two for McGinty) played in a row. In fact, during the debate’s two commercial breaks, the only commercials broadcast were for the Senate race. (According to the Center for Responsive Politics, Pennsylvania’s senate race is the most expensive country. To date more than $90 million in outside money has been spent on advertising.)

Many of the ads for McGinty have attempted to illustrate similarities between Toomey and Trump. Martin, an expert on political messaging, says voters have really started to question Trump’s fitness as a leader, which may be why it has been difficult for Toomey to shake Trump.

Trump has had new controversies emerge almost weekly, causing Republican politicians to either stand by him or jump ship. Toomey is choosing neither. As Trump’s campaign continues to take on water, Toomey is Kate Winslet in Titanic, waiting for the perfect moment to spring off the railing, so the momentum of the boat doesn’t pull him deep into the icy waters and down into the abyss.

Martin thinks Toomey’s strategy is an attempt to cater to both sides of a divided Republican electorate. She says many conservatives in the suburbs of Philadelphia and Pittsburgh don’t approve of Trump and have indicated support for Clinton. On the other hand, rural conservatives are more gung-ho for Trump. If Toomey were to disavow Trump, Martin says he risks upsetting rural voters. But if Toomey gives a full-throated endorsement of Trump, he risks nudging those suburban Clinton-supporting Republicans to vote for McGinty, too.

“He has painted himself into a corner now … there is no way for him to take a position,” says Martin. “I would guess that this is not what he wants to be talking about right now.”

Martin says it’s fair for McGinty to criticize Toomey and link him to Trump, considering that Trump could be the leader of his party and many high-ranking Republicans, like Arizona Sen. John McCain, have taken a position on Trump. (McCain originally endorsed Trump, then pulled that endorsement after the Access Hollywood tapes were released.

“Toomey wants to neither confirm nor deny his support for Trump, and McGinty wants that to look as suspicious as it can,” says Martin. “Toomey doesn’t want to be part of Trump [losing] because that is bad for him, but also he wants not to be tied to those voters who refuse to vote for [Trump]. And McGinty is crying foul. If I were in her camp, I would do the same thing.”

To fight back, Toomey has attempted to paint McGinty as a supporter of sanctuary cities and an ally of criminal undocumented immigrants. Martin questions this strategy’s effectiveness, given that most voters aren’t even aware what sanctuary cities are. (G. Terry Madonna, a professor and pollster at Franklin & Marshall College in Lancaster, says there hasn’t been a poll asking voters about sanctuary cities.)

Also, McGinty’s spokesperson, Sean Coit, says that McGinty’s position on sanctuary cities has been consistent. “Sanctuary cities are not the answer, and [McGinty] has urged law enforcement at all levels — federal, state and local — to work together to keep criminals off the street,” Coit wrote in an email to City Paper.

“Sanctuary cities is a counterpunch that keeps the base on Toomey’s side,” says Martin. “The same voters in Pennsylvania that want Toomey to support Trump are also agitated about immigration and possible crime by undocumented immigrants.”

But so far, all the noise seems to be favoring McGinty. After being 10 points behind this summer, most polls conducted in the fall have shown her tied or ahead. The latest Emerson College Poll has Toomey slightly ahead of McGinty by three points. Toomey has a new attack that he hopes will sway the numbers further in his favor.

Last week, a WikiLeaks hack revealed that McGinty emailed a friend in the Democratic Party last summer, asking for advice on whether she should run for senator. At the time, she was serving as Gov. Tom Wolf’s chief of staff; such communication could be an ethics violation. Since the leak, Toomey has gone on the offensive, sending out several campaign emails about the issue.

McGinty, at an editorial meeting with PennLive.com that was posted on YouTube, defended her email. She said it was from a personal account, as a note to friend, and said Toomey “is grasping at anything, instead of talking about his personal record.”

No ads have been aired about this email issue yet, but there are still two weeks until the election.

Meanwhile, outside groups, both conservative and progressive, are trying to focus on issues beyond the presidential contest, spending tens of millions of dollars to do so.

Americans for Prosperity, a political-advocacy group backed by the Koch brothers, has identified 650,000 undecided Pennsylvania voters and has been going door-to-door, trying to persuade voters that McGinty’s economic policies are against their interests. Beth Ann Mumford, Pennsylvania director for AFP, says the campaign is informing voters about McGinty’s record on tax regulations and green-energy mandates, and claiming McGinty will increase taxes on middle-class families and destroy jobs.

“We have been working for the last couple months for her defeat,” says Mumford. “We have been talking on phones and knocking on doors, making sure that citizens know that she’s not a good choice for U.S. Senate.”

On the other side, Planned Parenthood has identified 400,000 undecided Pennsylvania voters and is also going door-to-door to convince them Toomey would be bad for women’s health issues. Deirdre Schifeling, of Planned Parenthood, says it’s important to inform voters about Toomey’s voting record.

Regardless of the noise from ads, the race is an important one. Earlier this year in an interview with CP, Madonna called Pennsylvania’s Senate race one of the top five U.S. Senate elections in the country.

If Clinton wins the presidency, Democrats need to switch four Senate seats from red to blue to regain the Senate. According to The New York Times, three Republican seats have a greater than 75 percent chance of switching. Pennsylvania is rated as a toss-up, and could be that final linchpin in determining who controls the Senate for the next two years.

Says Madonna: “It is inconceivable to think Democrats could win control of Senate without winning this seat. 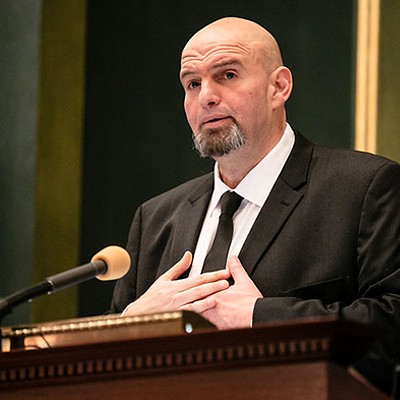 Rep. Guy Reschenthaler to potentially lose tens of thousands in political contributions after companies cut off some GOP lawmakers