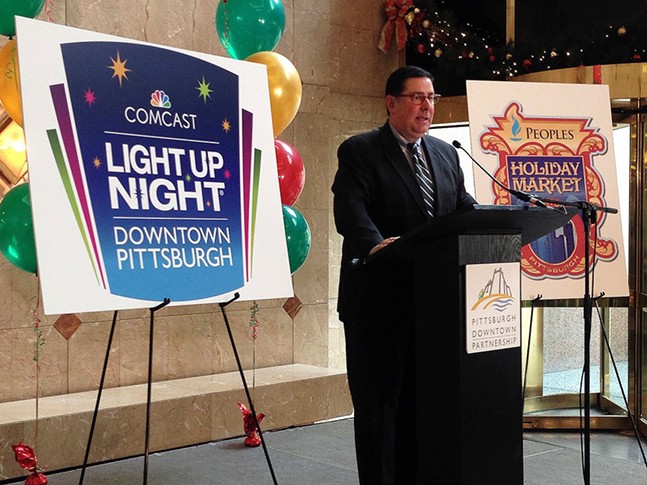 CP photo by Ryan Deto
Pittsburgh Mayor Bill Peduto
Anyone familiar with Light Up Night knows that it’s one of the most vibrant, crowded nights that Downtown Pittsburgh experiences each year. Pedestrians cram on the sidewalks and streets to watch buildings and Christmas trees get illuminated, listen to live music and watch fireworks erupt over the the city's three rivers.

To accommodate all the foot traffic, sections of Ft. Duquesne Boulevard will be closed to cars and will act as a pedestrian promenade during the holiday festival held on Nov. 18. The promenade will include two large music stages, as well as many food vendors and interactive attractions. It will also provide great views of the fireworks, said Jeremy Waldrup of nonprofit coalition Pittsburgh Downtown Partners at a Nov. 3 press conference. Also new this year: cable and internet giant Comcast agreed to a multiyear naming-rights deal, so the festival will be referred to as Comcast Light Up Night

Waldrup joked that it might be a difficult sell Pittsburghers on the name change, given how many locals still call PPG Paints Arena the Civic Arena, even though they were never the same structure.

“I know Pittsburghers can be a little resistant to change, but we need your help to make Comcast Light Up Night a household name,” said Waldrup.

“We may be a bit resistant to change, but things are changing,” said Fitzgerald. “People are living Downtown, and we are embracing the changes.”

Comcast is also bringing changes to the night. Christine Whitaker of Comcast said there will be 30 “street team” members in light-up jackets roaming Downtown and handing out Santa hats. She also said there will be a virtual-reality booth where users can experience a NASCAR simulation and WiFi access on Ft. Duquesne boulevard.

Carson, a Springdale native, was a pioneer in the the U.S.’s environmental movement, and authored influential books, such as Silent Spring and The Sea Around Us. The project is sponsored by German-based material-science company Covestro and will use wind turbines manufactured by Pittsburgh-based manufacturer WindStax to power the lights.

This year, the main music stages will be placed on Ft. Duquesne Boulevard, and top musical acts for the festival include rock band O.A.R. and local pop singer Daya, as well as other artists.

Comcast Light Up Night will be held Fri., Nov. 18. The tree lighting is at 11:15 a.m.; activities run throughout the day, with the fireworks begining at 7 p.m.

Allegheny County Jail population down 7% in 2019, according to new county report