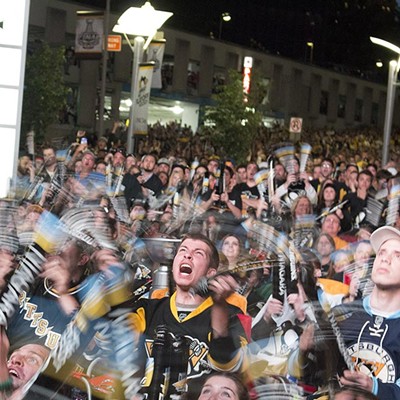 
Thousands of Pittsburgh Penguins fans gathered outside Consol Energy Center for Game 5 of the NHL Finals Thursday to watch the Pens’ bout with the San Jose Sharks on the big screen. And they left behind them hopes for an easy win and a sea of garbage in the streets surrounding.


The Pens lost 4-2 in their bout with the Sharks. Game 6 of the Stanley Cup Finals is this Sunday in San Jose.


“You know what, it’s Game Five, they played hard,” said Bryce Knapp of Thunder Bay, Ontario — Pens goalie Matt Murray’s hometown. “It’s early. Their goalie stood on his head. You can’t be disappointed. They played a hell of a game, in my opinion.”


Washington Place was filled with people from Fifth Avenue to Centre Avenue, seated in lawn chairs in the street, in openings at the Two Chatham Center parking garage, on the steps of Epiphany Catholic Church and standing in the yard surrounding Consol.


Two quick goals from the Sharks in the first three minutes of the match put a damper on the Pittsburgh crowd, but it was shortly equalized by two goals from Pens  Evgeni Malkin and Carl Hagelin— both goals scored within 22 seconds of each other.


Confetti peppered the crowd outside as they erupted into cheers, cheers that would not be heard for the rest of the game. The Pens led an assault on Sharks goalie, Martin Jones — taking 46 shots in total, and saving 44 of them — but were unable to get the puck beyond the goal line. The second period went scoreless on both sides.


“I think they got to just keep playing their game,” says Rob Degangne, who was sitting on a wall outside Consol with Knapp, waiting for people to file out. “They got to get on pucks — they got to beat them with their speed. They’re a better team, they’re faster, and San Jose can’t keep up with their skating, in my opinion. Pittsburgh has better goaltending.”


The Pens still lead over the Sharks in the series, 3-2, but Sunday’s game will determine whether the Pens will walk away with their fourth Stanley Cup, or head to Game 7 at home.


“The Pens have outplayed them every game in the series,” said Pens fan Tyler Falk. “Goals just didn’t go in tonight, that’s all.”


Falk, along with his friend Shane Fisher, arrived at Consol around 4 p.m. Thursday, and managed to find a spot for their chairs in the street about halfway up Washington Place. At that point it was the furthest row back.


Fisher and Falk stayed seated in the street well after Game 5 ended and the rest of the crowd shuffled past them, taking cautious steps through the piles of airless boom sticks, rolling beer bottles and flattened pizza boxes.


The two each clenched a can of Miller Lite and watched workers push the garbage around with leaf blowers and push brooms as the screen at the bottom of the hill showed the Pens logo.


When asked if they plan to come watch Game 6 outside Consol, Fisher answered: “Hell yeah. For sure.”


“We’re just going to sit here until Sunday,” said Falk with a chuckle.