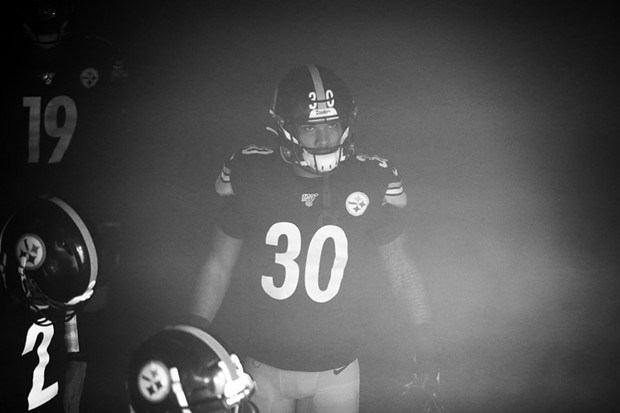 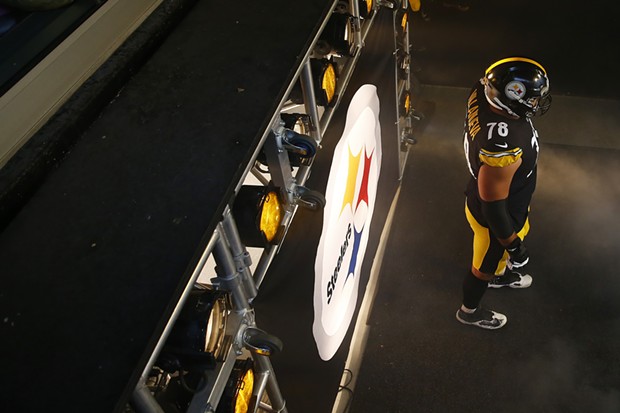 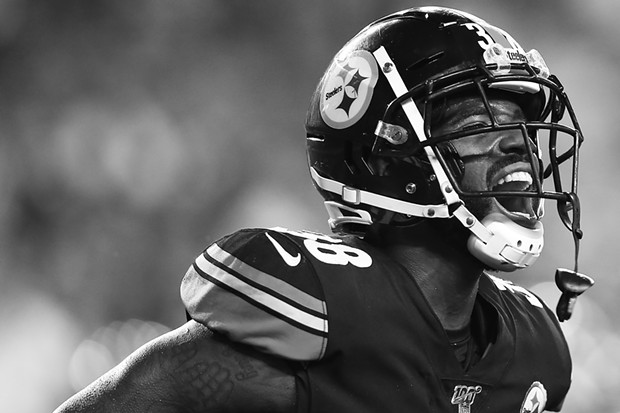 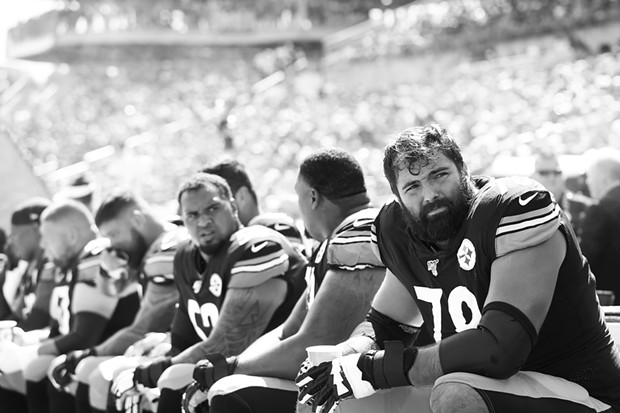 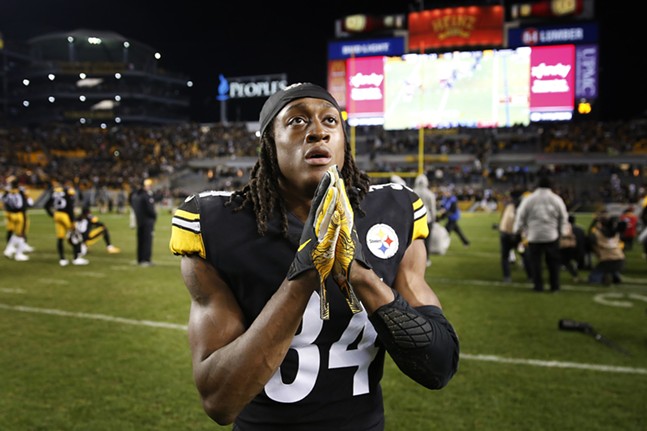 CP Photo: Jared Wickerham
Terrell Edmunds #34 watches the Cleveland Browns vs Baltimore Ravens game on the big screen following their 16-13 win against the Cincinnati Bengals.
In my 10th season shooting NFL games, I've never encountered a situation like what transpired at the end of the Steelers vs Bengals game.

With their playoff hopes in the hands of the Cleveland Browns, who had to defeat the Baltimore Ravens, about half of the team stayed on the field, along with thousands of fans, to watch the other game finish on the big screen. Terrell Edmunds was the first I saw, who held his hands up. Then T.J. Watt, who stood with coaches. Other players sat on their helmets on the field. But they were all glued on every move by Baker Mayfield and the Browns offense as they made their way down the field with less than two minutes remaining. A close catch. A review. It kept everyone on pins and needles through Heinz Field even though the game they were there for had been over for ten minutes. Then JuJu Smith-Schuster walked to the other side of the field and watched the game with two members of the team the Steelers had just defeated 16-13.

As the Browns went for it on 4th down, Mayfield threw an interception. Game over. Fans left and JuJu made his way to the tunnel. There's still a slim chance that the Steelers make the playoffs, as I write this, if both teams in the Sunday Night Football game tie. But I think Lloyd Christmas had a better chance with Mary Swanson.

Thanks for following along all season with my coverage of the Pittsburgh Steelers. I hope to bring you more sports coverage in the coming months and wish everyone a Happy New Year!

For the first time all season, the Pittsburgh Steelers elected not to do individual player introductions against the New England Patriots.

Typically the starters from either the offense or defense will be announced one at a time and make their way through the fog and the fancy lights while pumping up themselves and the crowd before kickoff. And I was ready. On my stomach, waiting for some dramatic images. But nothing happened. I can only speculate but I'm going to assume that this type of pregame hype wasn't warranted against a team that was 2-11 all-time against Tom Brady coming into today's game. Perhaps they felt as if both sides of the ball equally needed to contribute to this game in order for them to come out of it with a win.

But win they did. 17-10. And they did it without starting running back, James Conner who remains injured. Rookie backup, Jaylen Samuels, finished the game with 19 carries and 142 yards.

We'll see if head coach Mike Tomlin keeps with the winning tradition for the last home regular season game of the season, Dec. 30 against the Cincinnati Bengals. The team has one more hurdle in their way, the New Orleans Saints, on Dec. 23. 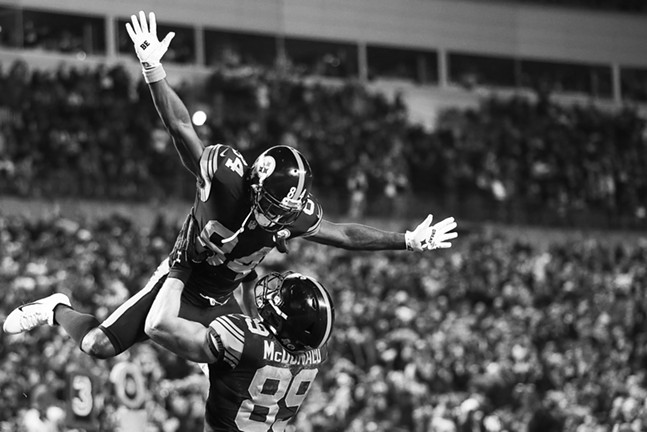 CP Photo: Jared Wickerham
Antonio Brown of the Pittsburgh Steelers is lifted into the air by Vance McDonald following McDonald's touchdown.
Hours before Antonio Brown flew down the sideline, he was clocked going 100mph down McKnight Road in his Porsche. He and the entire Pittsburgh Steelers team never took their foot off of the pedal in their game against the Carolina Panthers. Tonight's game set the NFL record this season for most points scored and Pittsburgh did it at will. Five touchdowns for Ben Roethlisberger, all to different receivers, put him in sole possession of 7th place all-time with 350 touchdowns.

Pittsburgh improves to 6-2-1 and will travel next to Jacksonville to face the Jaguars on November 18th for a 1pm game. 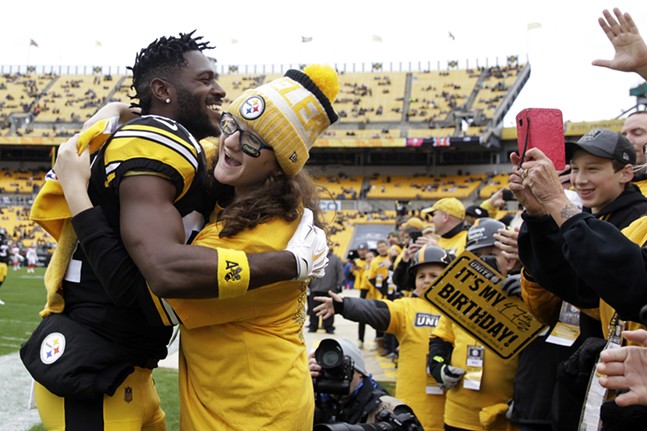 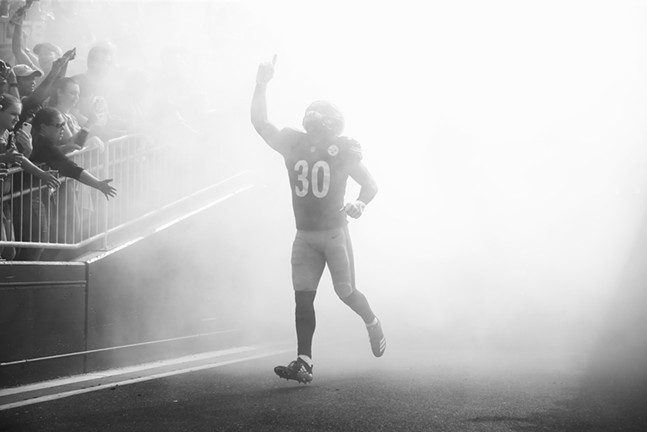 CP Photo: Jared Wickerham
James Conner enters the field amidst a cloud of fog.
Between the 80-plus degree weather and the Steelers offense, the Atlanta Falcons' defense got scorched today at Heinz Field. The Steelers ran up the score in the end, with a final of 41-17. 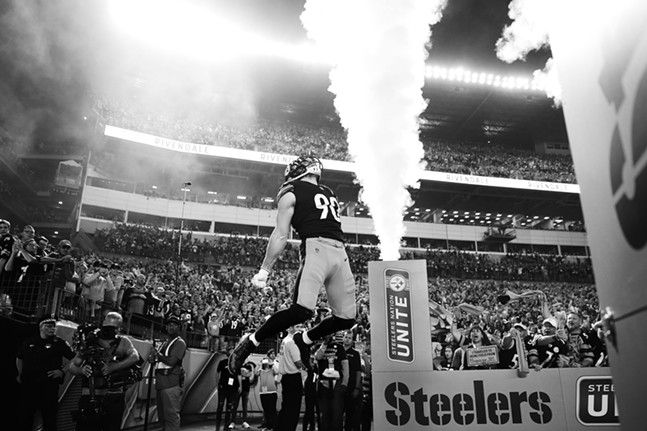 CP Photo: Jared Wickerham
T.J. Watt #90 leaps into Heinz Field while being introduced.
No one was more hyped to start this game against the Baltimore Ravens on national television than members of the Steelers defense, as seen in the opening image of T.J. Watt. After a quick interception on a botched catch attempt by Vance McDonald, the Steelers couldn't stop their AFC North rivals from doing whatever they wanted on offense, whether it was running the ball through myriad missed tackles or beating rookie safety Terrell Edmunds with the deep ball. In the end, the Ravens took the win 26-14, at Heinz Field on Sun., Sept. 30.

But I always look for the silver lining in these games because the images are ultimately the most important part, regardless of who wins or loses. So, there was one small win today on a personal note, and that was moving around Heinz Field completely normal following knee surgery and in my fourth week of physical therapy. It’s the little wins, and this one was knowing I could keep up physically going up and down the field, kneeling with my camera on every play.

Next week, the Steelers face the also-struggling Atlanta Falcons at Heinz Field. City Paper will be here to see if the  can bounce back from this loss.