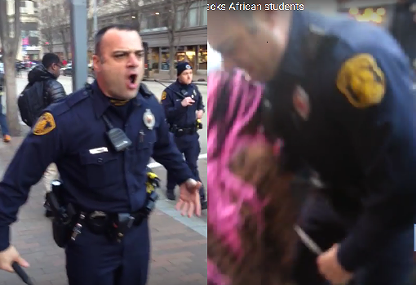 On the left is the officer approaching a City Paper reporter. On the right is an officer pushing a teen girl with his baton.
A police officer who was videotaped yelling at a City Paper reporter on Wednesday, as the reporter videotaped the scene outside of the Wood Street T Station, has shown up in a YouTube video pushing a young girl with his baton and shouting obscenities at the crowd.

The most recent video, shot by someone who posted it under the name Asi Lovely, shows the unidentified officer pushing the teen to the ground and shouting, "Get on the sidewalk, god damn it. Get the fuck out of here."

He then tells a person recording the scene to "Get it all on tape. Make sure you get it all, asshole."

The teen who was pushed can be heard asking about her brother, whom she says police have taken into custody, before she is pushed. The video initially shows the teen standing near an Allegheny County Sheriff's deputy. However, the city police officer pushes the deputy out of the way to get to the girl and then pushes her with the baton.

Sources tell CP that the officer's name is Nicholas Papa, who according to a Pittsburgh Post-Gazette article graduated from the police academy in 2009. The Pittsburgh Citizens Police Review Board has opened an inquiry into the interaction on Wednesday between Papa and City Paper reporter Ryan Deto. The interaction occurred as Deto videotaped the scene of the arrest of a juvenile who was allegedly hitting the emergency button on the T station's escalator; an adult who was charged with three misdemeanors; and three juveniles who were later cited for misdemeanors and released. The first several seconds of the video are below, and it can be seen in its entirety here.

City Paper brought the video to the attention of Beth Pittinger, the executive director of the CPRB. Pittinger called the video “awful.”

“We believe this to be the same officer from the City Paper video, and yesterday I said he lost his professional poise, today it’s even worse,” Pittinger said. “Even the little things like banging the mailbox with the baton and the language shows me that this guy was clearly out of control. You don’t do this to children."

“I am stunned with that officer’s conduct toward that kid. He even pushed a deputy out of the way to get to her. This is clearly unbecoming at the very least. She’s crying and upset, and he uses force against her.”

Pittinger said she believes the officer also stepped outside of the professional code of conduct by pushing the deputy out of the way.

“That deputy didn’t seem to be concerned,” Pittinger said. “He wasn’t escalating. He was in command and control of that situation. Apparently whatever that young girl did annoyed the city officer, and he pushed the deputy and ran in there like a bat out of hell.”

Late Thursday, Pittsburgh Police Chief Cameron McLay released a statement about the initial video indicating that: "On first examination, the video provided shows no evidence of serious police misconduct. The matter will be investigated by Police Zone 2 command and the Office of Municipal Investigations, to address questions raised about officer conduct. During tense times such as these, it can be challenging for officers to maintain professional decorum, but doing so is an expectation of our profession. Training, counseling or discipline will occur as the need is identified during these reviews."