Mugshot provided by the Pittsburgh Police
Anthony Mohamed
Pittsburgh Police have arrested a 26-year-old Hazelwood man in connection with a nonfatal shooting of a Muslim taxi driver six days ago.

Pittsburgh police Lt. Vic Joseph announced at a press conference this afternoon that Anthony Mohamed was taken into custody at his residence in Hazelwood at around 10:45 this morning. Mohamed has been charged with aggravated assault, criminal attempted homicide, and recklessly endangering another person.
click to enlarge

Joseph said just that a "short period of time" elapsed between when the police identified the suspect and obtained the arrest warrant. He said identifying the suspect was a result of the collaboration between the Pennsylvania State Police, Rivers Casino (where the suspect entered the taxi), the Cranberry Taxi Company, and a Hazelwood insurance company.

The lieutenant would not reveal whether the shooting will be investigated as a hate crime — he repeatedly told media he would not get into details, as an investigation is ongoing. Following the shooting, the Council on American-Islamic Relations (CAIR) has asked the Department of Justice to investigate the shooting as a "Post-Paris" hate crime, and they also contacted Pittsburgh Police and the FBI.

According to Allegheny County court records, an Anthony Lamar Mohamed, with the same birth date as the suspect police arrested, has criminal convictions dating back to 2008 when he was sentenced to five months imprisonment for unauthorized use of a motor vehicle. He pled guilty in January 2011 to charges of criminal trespass, making terroristic threats, simple assault, theft, harassment and criminal trespass. He was sentenced to one year probation. In April 2011, he pled guilty to charges of defiant trespass, simple assault of a victim under 12 and endangering the welfare of children. He was given two years probation. Last year, Mohamed pled guilty to DUI and driving with a suspended or revoked license and sentenced to six months probation.

"I think we would like to commend the police for having investigated [the case] and using all the evidence they could gather," Safdar Khwaja, of CAIR's Pittsburgh chapter, told City Paper over the phone. "I think they need to continue to probe the bias motive they have to follow. That’s what we will be asking them to do."

Khwaja said he's concerned, however, that the suspect's last name could be an obstacle to a hate crime investigation.

"Of course the person they arrested, his last name sounds like he would be a Muslim. That is not necessarily true. The police still need to examine the hate motive of what took place in the taxi," he says.

According to details that the 38-year-old driver, who has not been identified, shared with the Islamic Center of Pittsburgh and the Pittsburgh Post-Gazette, the passenger began asking him about his ethnicity and talking about ISIS. The driver said he told the man that he is Moroccan and is an American. The driver said that when he reached the passenger's house, he asked the driver to wait while he retrieved his wallet but instead retrieved a rifle. A Department of Public Safety announcement, released on Nov. 26 but updated today, says that a bullet blew out  the rear window of the cab and struck the driver in the back. 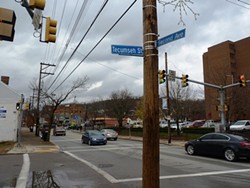 Photo by Ashley Murray
According to Pittsburgh Police, the victim was driving driving outbound on Second Avenue in Hazelwood when he was struck in the back by a bullet as he drove between Flowers Avenue and Tecumseh Street.
Police spokesperson Sonya Toler wrote in an email to CP that  "the victim did not initially present to investigators the details he shared with the Post-Gazette."

Joseph would not reveal what the police learned about the suspect's statements to the taxi driver and that he could not "speak to what the victim may have told CAIR or anybody else."

The DOJ has not responded to multiple phone calls for comment, but Khwaja says that DOJ reached out to a number of local mosques and CAIR to offer "counseling and discussions."

The FBI also says it's investigating. "We're reviewing the matter as we do all crimes that appear to be racially motivated, and we are working with city police," said FBI Pittsburgh's Supervisory Special Agent Gregory Heeb.

Earlier this week, the Islamic Center of Pittsburgh published a frustrated message on its homepage, calling the police's investigation "completely inappropriate and insufficient," citing a lack of communication from the city and police.

Mayor Peduto's office says that it's been in communication with the Pittsburgh's Muslim community during the investigation though, and "as recently as today" spoke with Islamic Center officials.

The Islamic Center did not respond to inquiries for elaboration.

"It’s not going to be a prolonged investigation," Joseph told the media. "We're still going through evidence and once all is investigated, it will be concluded."

Chief Cameron McLay released a statement this evening that he and his staff met with the executive director of the Islamic Center, Wasiullah Mohamed.  Full text of the statement can be found below.

"Members of my staff and I met with the Executive Director of the Islamic Center of Pittsburgh and the Pennsylvania Interfaith Impact Network this afternoon. I was able to provide them with an update on our investigation into the Thanksgiving Day shooting in Hazelwood, the timeline for Police Bureau investigative efforts, and some details about the arrest that was announced earlier today.

We debriefed the investigative process so both sides understood how the investigation unfolded, why that was necessary, and, most importantly, how the community perceived the unfortunate sequence of events. All agreed communication would have helped dispel misconceptions and we all have agreed to work together from this point forward.

The rest of our discussion was centered upon how we move forward to improve communication and trust between the police and our Islamic communities. There will be a joint press conference in the near future to outline our collective plan for collaborative partnership."