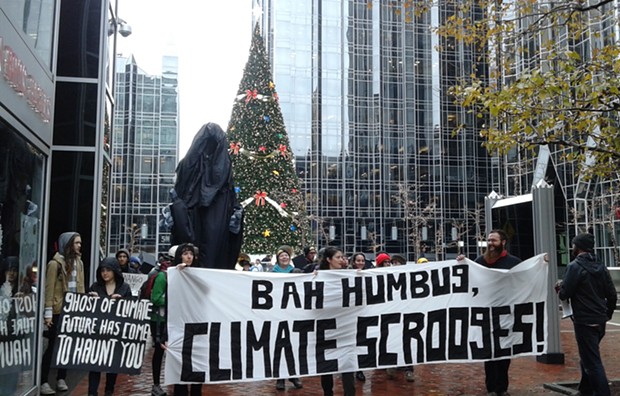 Photo by Ashley Murray
Protesters visited PPG Industries to deliver "lump of coal" from the "ghost of climate future" to executives.
On Tuesday, the "Ghost of Climate Future" could be seen marching through downtown Pittsburgh as part of  A Christmas Carol-themed protest against climate change. Organized by Three Rivers Rising Tide, The demonstration called out ties between local corporations and the Allegheny County government, calling them "climate Scrooges."

Along the march, the activists visited EQT, PPG, U.S. Steel, and the law firm Babst Calland, all of whom have representatives on the Allegheny County Health Department Air Pollution Control Advisory Committee. While the committee is tasked with overseeing local air quality, Three Rivers Rising Tide says the corporate members appointed by County Executive Rich Fitzgerald are some of the top polluters in the region.

"Our purpose is to bring to light the corrupt nature of the Air Pollution Control Advisory Committee," says Three Rivers Rising tide member Eva Westheimer. "Pittsburgh and Allegheny County are known for having poor air quality. There is a conflict of interest on the board, and we are here to highlight the corruption."

In a statement, PPG spokesperson Mark Silvy said: "The Advisory Committee represents a mix of professionals from the public and private sector, including representatives of citizen environmental groups, industry, and academia, who share insights with the Allegheny County Department of Health on matters related to air quality in the County."

EQT spokesperson Linda Robertson said:  "EQT is committed to conducting operations in a sustainable and environmentally responsible manner at all times, striving to preserve and safeguard land, air and water. Company officials often work closely with various environmental agencies to collaborate on best practices – such as greenhouse gas management – as EQT has had a formal program in place for the past several years. Additionally, EQT utilizes “green completions” nearly 100% during well development by capturing gas rather than flaring (or burning) during the initial days of a well’s productive life, and EQT provides voluntary reporting of emissions in our Corporate Social Responsibility report, which can be found on the home page of our website."

In addition to claims that corporations represented on the advisory board are the region's top contributors to pollution, Three Rivers Rising Tide also argues that having representatives from Babst Calland serve on the board while members of their law firm represent Shanango Coke Works for Clean Air Act violations is a conflict of interest.

The final stop on the march was at the Allegheny County Courthouse where Fitzgerald's office is located. With a Christmas tree looming behind them, the protesters delivered their speeches and a cardboard replica of a lump of coal, while county workers looked on from the building above. 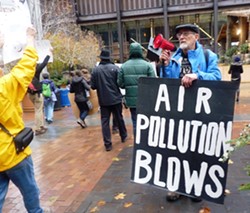 Photo by Ashley Murray
Activist Mel Packer directs the crowd of protesters to the U.S. Steel building.
"Rich Fitzgerald, your crimes are possibly the worst," alleged activist Mel Packer. "Each of the others we have haunted today bought positions with the Allegheny County Health Department through contributions to you. Industries that participate in poisoning the air and water have all contributed to your campaigns and have, in return,  received positions on the very committee that is charged with regulating those companies."

EQT's PAC and Babst Calland have each contributed $10,000 to Fitzgerald. He also received $2,500 each from PPG's PAC and US Steel's.

“Where the county has the authority, or can provide input, it has been extremely proactive. In the past four years alone, we have seen each air monitoring site for fine particulate pollution in the county meet federal standards for the first time in history. The annual averages of PM2.5 have decreased steadily. Funding has been provided to organizations to reduce greenhouse gases. We require Best Available Control Technology for greenhouse gases on any project requiring an air quality permit. For the first time, the county passed air toxic guidelines, over the objections of industry.

We have also looked at our own house and invested in upgrades to our facilities that have resulted in the conservation of energy and water, reductio n of GHG emissions and improved heath and productivity. We have invested in natural gas and hybrid vehicles and worked to upgrade and retrofit diesel vehicles. We are an active participant in the Green Workplace Challenge and have been the best performing organization in our category for the past two years. There are many, many more accomplishments and efforts that we can point to – these are just a few readily available examples.”