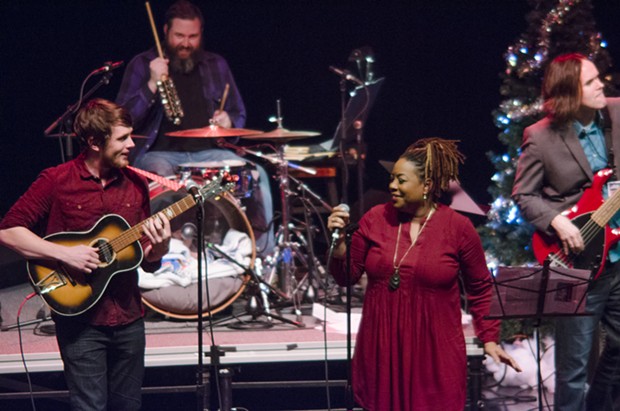 Photo: WYEP
WYEP Holiday Hootenanny
Rap, country, , soul, folk – the Pittsburgh music scene is thriving with talented artists, yet it can be difficult to see more than one genre in a night without having to switch venues. Every December, WYEP attempts to bridge this gap with its Holiday Hootenanny.

The inaugural event took place in the station's performance space and was started in 2008 by Cindy Howes, evening host digital content manager at WYEP, as a way to celebrate the season while putting a spotlight on the local music scene.

“The first Hoot took place in our space that holds about 100 people. I'm pretty sure there were 200 people crammed into that room,” says Howes.

Realizing that the Holiday Hootenanny had for significant growth, Howes committed to continuing the event on an annual basis. This year's Hootenanny takes places at the August Wilson Center and boasts 20 local acts, ranging from those fresh on the scene to musical veterans.

“We want to be as representative of the Pittsburgh music scene as possible,” says Nathan Zoob, Wreck Loose guitarist and musical director for the Hootenanny.

Zoob has held that position for the last five years and says that this year’s lineup is one of the most assorted and impressive to date.

While there is a roster of artists Zoob and his team draw from year to year – like The Wreckids, Josh Verbanets, Morgan Erina, and Mark Dignam - half of the show's spots are left open for new voices.

“It’s part of a process of trying to build a more robust, diverse lineup each year,” says Zoob. “That's the end goal, and every year they get a little bit closer.”

For 2018’s round of fresh Hootenanny acts, Zoob is most excited to see local hip-hop artist Benji. and soul singer Clara Kent.

“Benji., brings the house down in rehearsals, I can’t imagine what he’s going to do on stage,” says Zoob. “[And Kent,] that voice … there’s was a point in rehearsal – we were trying to come up with this arrangement for a gospel tune she’s doing – and there was a point in the process where I just totally lost my place and I was just listening to her sing. Even with half of my brain trying to do the math for the arrangement, the other half was just completely consumed by listening to her perform, she’s so good.”

At the event, one can expect to hear a mix of traditional holiday tunes, classics, and brand-new arrangements of old songs. But that's not all. Zoob says that every year they stretch their mission statement to include tracks like “California Dreamin'” by The Mamas & The Papas.

“Songs that mention winter or that feeling without explicitly being about the holidays gives us the chance to include some stuff that we couldn’t otherwise include,” says Zoob. “[It allows] us to have a more interesting setlist.”

The holiday season provides the chance to reconnect with family. In Pittsburgh, it's a chance to enjoy a collection of the best local music acts of the year.

"It's a wonderful way to further showcase local musicians on a big stage," says Howes. "I'm always in awe what our Hoot musicians can do."