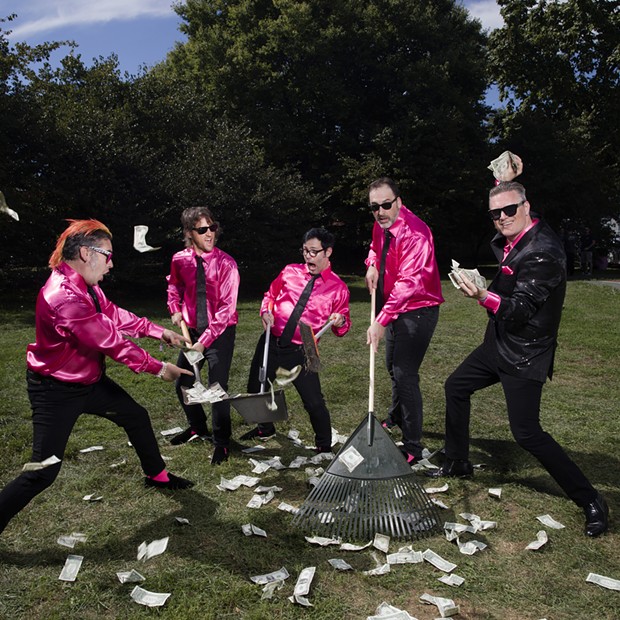 Photo courtesy of Roberto Gasparro/Fat Wreck Chords
Me First and the Gimme Gimmes
The Rex Theater was sold out Tuesday night and packed with bodies of all ages for an evening of punk for the first night of the Me First & the Gimme Gimmes tour with PEARS and Masked Intruder. For Pittsburgh punks, this was a real treat, as the Rex is about half the size of all the other rooms on the tour.

The opening act was a bit of a show stealer. PEARS, from New Orleans, is a raucous ensemble of maddening punk energy. Its stage presence is wild, with vocalist Zach Quinn running around shirtless and wildly gesticulating through every single song. PEARS may be on a bigger room tour, but they’re still spill and people hang from the exposed pipes like wild animals.

After PEARS, cue two of the most unbearably fun gimmick bands in existence. Masked Intruder did what it did best—perform poppy punk as the masked criminals Green, Yellow, and Blue (Red was ‘in jail’ and could not drum on this tour). Their catchy-ass pop is bolstered by the absurd presence of Officer Bradford—long arm of the law and band member whose job is to rile up the crowd, play some tambourine and dance with strangers who aren’t having enough fun.

Masked Intruder has some of the best banter, never breaking character, making jokes about themselves and the other bands on the gig. “Zach Quinn [of PEARS] can’t wear a shirt on stage, it’ll melt off. I’ve seen it,” deadpanned Blue. He also called Me First & the Gimme Gimmes the best band...or rather “The best band on Fat Wreck Chords, easily.”

“I Don’t Want to Be Alone Tonight,” one of my personal favorites, was dedicated to all the women in the crowd, who were over 18, of course. And single. Or maybe just at the gig without their boyfriends. This kind of goofy persona and dedication to staying in character makes the earworms the band writes even more irresistible.

Songs like “Stick ‘Em Up” and “Running From the Cops” had the crowd gleefully singing along to songs about robbing people and running away from the law, and the absurdity of it all provided a wonderfully blissful feeling, especially with “Crime Spree,” a real heartwarming criminal love story about—you guessed it—going on a literal crime spree.

Me First & the Gimme Gimmes rolled up next, dressed to the nines. Shiny gold wall streamers and a giant pink and black banner accented the back of the stage while vocalist Spike Slawson rocked a glittery tux jacket and the rest of the band donned Pink Ladies-style jackets. There are few bands that exist today that are so committed to having fun and not being stuffy and serious; Me First & the Gimme Gimmes are a perfect example of the magic that happens when you shirk all the bullshit posturing and attitude of cool and commit to making people smile and laugh.

With its era-themed records and super fun covers, audiences of all ages can get in on the fun (even if some of the banter is a little adult in humor). During the Gimme Gimmes set, there were parents with their kids, college and adult bros, crust punks, some normal looking people and cute couples on a distinctly punk date night to name just a few of the many social groups represented. All were packed in side by side, dancing and singing along.

The Gimme Gimmes plays the kind of sets where the songs are short, so in a matter of ten minutes they burst through track after track, covers of “Jolene” or “Country Roads” or showtunes classics like “Science Fiction Double Feature” from Rocky Horror Picture Show. It’s all over the place and covers a ton of ground. It shouldn’t make sense, and on paper it doesn’t sound like it could work, but it makes perfect sense with each of these tracks being given the MF&TGG punk treatment. Each cover is a reinvention of another genre into something distinctly rascally and bursting with punk rock charisma.

The night proved to be a sprint of irresistible goony fun in an intimate setting that felt familial and united. It’s a nice reminder of the positive outcomes of not taking yourself too seriously and giving yourself over to punk pleasure. 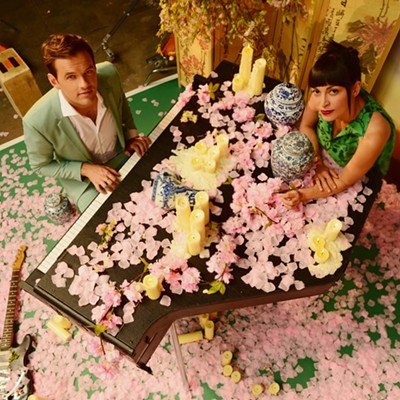