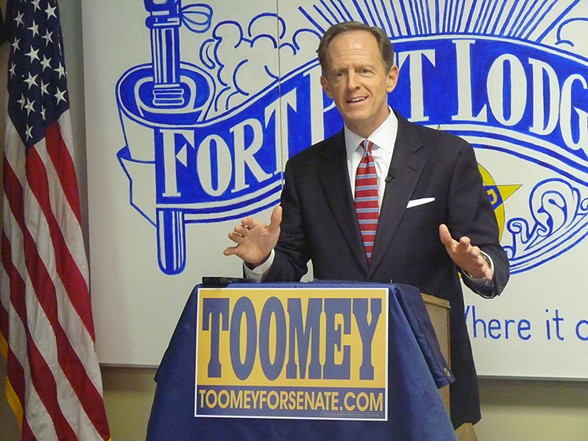 CP Photo by Ryan Deto
Pat Toomey at a campaign stop in Pittsburgh
This summer, Senator Pat Toomey (R-Pennsylvania) introduced a bill that would cut federal funding to cities that institute sanctuary-city policies. These policies prevent local law enforcement from communicating with U.S. Immigration and Customs Enforcement or holding undocumented immigrants for extended periods without a federal warrant.

In July, Toomey’s bill failed to obtain the majority vote necessary to clear the Senate. But at an Oct. 12 campaign stop in Pittsburgh, he reiterated his support for defunding and ending sanctuary cities.

“We did not succeed that day, but I am not giving up,” said Toomey. “I am going to continue in this effort because we have to end sanctuary cities.”

Toomey held his campaign stop at Lodge 1 of the Pittsburgh Fraternal Order of Police, where he held a roundtable discussion with local law-enforcement leaders and Republican officials. Toomey discussed legislation he has introduced that he says is law-enforcement-friendly, including allowing local police access to military-style gear, exempting police and firefighters from pension offsets related to Social Security, and creating a rule that would weigh in favor of the death penalty for people who kill an officer serving in the line of duty.

The Pittsburgh Fraternal Order of Police has endorsed Toomey in his re-election bid, but FOP Lodge 1 PAC chairman Anthony Beatty said the group has not done any work with the senator on his sanctuary-city bill. The FOP did not issue a comment on whether it supports the bill.

“The fact that a person is here illegally in these sanctuary cities, confers a special legal protection that makes it impossible for the police to cooperate,” said Toomey. “This endangers all of us; the city of Philadelphia is arguably the most radical sanctuary city in America, and it’s gotta end.”

However, a 2015 study by the American Immigration Council shows that immigrants commit crimes at lower rates than native-born populations, and data from Syracuse University shows that the majority of undocumented immigrants detained have no local criminal record. When asked if he has any plans to address the millions of law-abiding undocumented immigrants, Toomey said that that is a “controversial” but “separate issue.”

“That is like saying what do we do about the flaws in our tax code," said Toomey. "It's another issue, it's important, but it's unrelated to the dangerous security issue that arise from sanctuary cities.”

Immigrant-rights advocates disagree with that notion. Sundrop Carter, of the Pennsylvania Immigration and Citizenship Coalition, told City Paper last month that politicians attacking sanctuary policies are merely attacking cities that have implemented welcoming strategies for immigrants. Carter adds that deportations are occurring in every county in Pennsylvania, even those with sanctuary policies.

Additionally, as CP reported in July, advocates say sanctuary policies can protect undocumented immigrants who are charged with minor crimes from falling into the hands of immigration officers. Helen Gym, a city councilor from Philadelphia, attended the People’s Convention in July and said that sanctuary policies can actually increase trust between undocumented immigrants and local law enforcement

“We don’t want people to be afraid to call the police to report crimes like burglary, etc.,” said Gym. “It is not the responsibility of local police departments to enforce immigration laws, since they are federal laws.”

Toomey also said at the press conference that he does not support a path to citizenship for undocumented immigrants, and that creating one would be “problematic.”

Toomey is in a neck-and-neck race with Democrat Katie McGinty in his bid for re-election. Real Clear Politics, which averages out poll data, has Toomey with razor-thin .04 percent lead over McGinty.