The city’s longest-running gallery exclusively devoted to photography is leaving its home of some 35 years for the greener pastures of the Penn Avenue arts corridor. 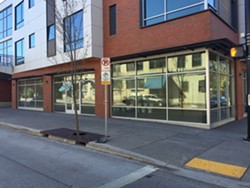 Photo courtesy of Silver Eye Center for Photography
Silver Eye's new home, on the corner of Penn Avenue and Mathilda, in Bloomfield
Silver Eye executive director David Oresick says he’s been pursuing the move since he took the job about two years ago. Penn Avenue was always high on the list of possible new locations, and a good opportunity finally arose, he says.

So this Saturday, Silver Eye is simultaneously closing its current exhibit, Materials & Processes, several weeks early, and holding its farewell reception in its South Side headquarters. The gallery will then begin the process of moving into a leased space in a brand-new building at the corner of Penn and Mathilda, in Bloomfield. (Silver Eye will sell the South Side building, Oresick says.)

Oresick says Silver Eye tentatively plans to open its first exhibition in the new space in the spring. In the meantime, the gallery’s Fellowship 17 exhibition will open at Pittsburgh Filmmakers Galleries, in Oakland, in February.

The move is a major one, because the size of Silver Eye’s intimate, three-room storefront gallery belies its importance on the local scene. Silver Eye first made its name in the 1980s and early ’90s, when the South Side was more of a hotbed of the visual arts. But with all the galleries and artspaces that have sprung up in the past decade in Bloomfield, Garfield and Friendship, says Oresick, “It just seemed like the time is right for Penn Avenue.”

The new space, to be leased from the Bloomfield-Garfield Corp., is about 2,000 square feet, says Oresick, considerably larger than the current 1,400-foot space. It includes an additional 900 feet to accommodate Silver Eye’s plans for expanded educational programming. The new space also has wider rooms and higher ceilings, the better to accommodate both events and the exhibition of large-scale photographs, which were once rare but are much more common now. There will also be room for a new feature: a selection of contemporary photo books curated by nationally known, locally based retailer Spaces Corners.

Oresick says he also expects parking to be a little easier than on the South Side.

But the big draw, he says, was the new neighborhood itself, home to a dozen or more arts venues, from established organizations like the Pittsburgh Glass Center to grassroots startups like Bunker Projects and BOOM Concepts. A fellow tenant of the Penn-Mathilda building is Assemble, an artspace and educational outfit whose interest in the intersection of art and technology that Oresick says fits neatly with Silver Eye’s own.

Additionally, on the first Friday of each month comes Unblurred, the long-running Penn Avenue gallery crawl, which regularly brings hundreds of art-lovers to a dozen or more venues in the neighborhood. That alone will be a big boost to foot traffic at Silver Eye: The South Side, by contrast, has little else in the way of visual-arts showcases and no regular gallery crawl, and most of its activity comes later at night, after Silver Eye closes. And most of those visitors are after drink specials, not fine-art photography.

Many of Penn Avenue’s smaller galleries are actually open pretty limited hours, in some cases only for Unblurred and special events and by appointment. By virtue of having daily, all-day gallery hours, Silver Eye, once it opens on Penn, should immediately become an anchor of the neighborhood arts scene, if not the community as a whole.

“I think the move to Bloomfield is wise,” says Silver Eye board member Jennifer Saffron. “It’s a perfect place for us to be.”

Silver Eye began in 1979 as two separate groups, the cooperative gallery Blatent Image and the Silver Eye Photographic Workshop, both originally based in Oakland. The groups moved to the South Side in 1984 and merged in 1985.

The gallery has long been an key venue for exhibiting work by everyone from internationally known photographers to local talent. “The gallery has served both the famous and the not-so-famous alike,” writes Saffron in an email, “shows of work like Ansel Adams, and shows by local artists like me — my first gallery show ever was at Silver Eye, with Tim Kaulen, when we were maybe 22 or 23 years old.” Saffron is now director of communications for the Greater Pittsburgh Arts Council; Kaulen is a local artist known for his involvement in projects including the sculpture "The Workers," in South Side Riverfront Park.

“Having a place to get together to talk about our work, to meet other photographers from other parts of the world, and to engage in the actual act of looking at art is critical context for artists,” Saffron writes. “Being on Penn Avenue with Unblurred and other organizations of similar size and scope that engage artists can only support this and also help establish Silver Eye in more contemporary context, both regarding photography itself and also how Pittsburgh is changing — we want to be relevant to what's happening in the photography scene at large, and engaged in the diverse arts community of the Penn Avenue Arts District.”

Switchfoot at Stage AE: Snap a photo, see the unity