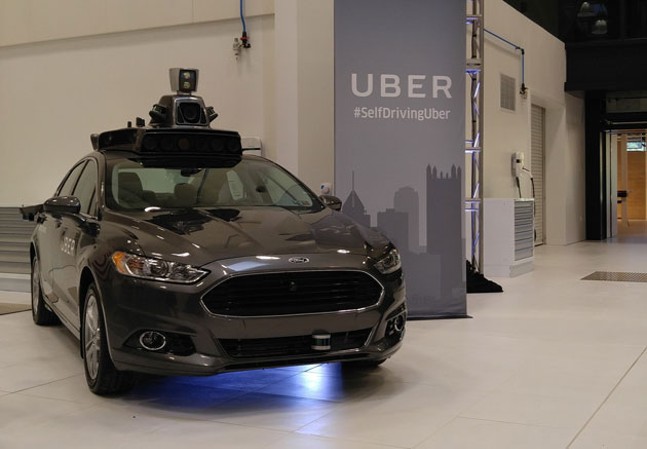 CP photo by Kim Lyons
A Ford Focus model of an Uber driverless car
Remember when you first learned to drive, and every time you had to stop, you stomped on the brake instead of easing down on the pedal? And you put your turn signal on a little bit earlier than you needed to? And you took right turns really, really slowly and cautiously?

That’s what it’s like being in one of Uber's driverless cars. It’s a car that knows how to drive, but is still learning the nuances of being a driver.

It’s not totally clear to me how cars are going to learn to navigate the famed Pittsburgh Left, but since Uber is training its cars in the Steel City, they might want to get that item into the algorithm.

Whether driverless cars are totally safe or will kill drivers’ jobs or will ever be ready for mainstream American drivers are all valid questions that need to be asked. But the driverless car era is starting in Pittsburgh today, whether we’re ready or not.

As of 6 a.m., frequent Pittsburgh Uber users (no newbies, sorry), who call for an Uber X trip that will travel within Uber’s designated driverless zone will have the option to choose a driverless vehicle, if one is available. There will be a driver (not a regular Uber X driver, a specially-trained one) behind the wheel while Uber fine-tunes the cars’ programming. And you can opt out if you don’t want to take one.

The San Francisco-based ride-hailing company opened its Advanced Technologies Center in Lawrenceville in February 2015, with the stated goal of developing driverless technology. Uber became the first tenant of the Almono site in Hazelwood this February, with plans to build a test track for the driverless cars. It announced recently that the first driverless cars would be in Pittsburgh, and this week, gave reporters the chance to test drive the cars before opening them to the public.

Here’s what I can tell you: Being behind the wheel of a driverless car is pretty fucking cool. And a little bit scary.

After hearing from executives at the cavernous, shiny Uber hive about the tech and the goals of the driverless program, reporters were taken to a parking lot where we used our phone as usual to request an Uber. Only this time, we chose the driverless option for an Uber-predetermined route.

I expected to get into a car with two Uber technicians and an empty driver seat, but they were both up front. At present, self-driving Ubers will all have a safety driver in the front seat, the company explained, “because they require human intervention in many conditions, including bad weather.” Uber says it expects to continue a mix of traditional and self-driving vehicles even after it has refined the technology.

After I put on my seat belt (required), I tapped an iPad in the back seat to start the ride. Most of the driverless Ubers are Ford Focuses (with some Volvos on the launch pad), equipped with cooling fans for the massive apparatus of sensors and lasers on the roof of the vehicle that made it a little difficult to hear my companions in the front seat.

We tooled around the Strip District, heading toward Downtown, with my driver balancing his hands lightly on the wheel, and his coworker watching the trip on a laptop with all the readout information from the car’s sensors. Eventually, we pulled into a parking lot. Then, unexpectedly, they let me get behind the wheel.

When I got in the driver’s seat, I adjusted the angle for my 6-foot frame (had to adjust the mirrors manually, a minor lack of tech on this tech-laden vehicle), and got familiar with the dashboard. When you’re in driverless mode, there’s a light indicator at the top of the odometer panel. Any action by the driver, like touching the brake, the accelerator or pulling on the steering wheel, will return control of the vehicle to the driver, very much like cruise control. And there’s a big red button in the middle console that kills the driverless program instantly, in an emergency situation.

There’s no forgetting you’re in a driverless car, because people stare at you, but like any other driver on the road, there’s no avoiding traffic. We sat through a few cycles of the traffic light on the 31st Street Bridge, just like everyone else.

Like some new drivers, the vehicle held a little closer to the double yellow line in the middle of the road than I normally would. But when an oncoming truck got a little bit over his side of the line, the car did adjust accordingly to avoid it.

Weirdly, it’s almost like the driverless cars are a little too cautious. For instance, as we headed back to the Uber building, we came to a four-way stop sign, with a car coming from the opposite direction. As my car began a right turn, and the approaching car continued straight, my car braked suddenly, even though there was no danger of a collision because it sensed another car in proximity.

I joked with my passengers that for a self-admitted Masshole like myself (i.e. one who learned to drive in Boston), that level of caution made me feel a little sheepish.

Uber touts the still-new driverless technology as the solution to reducing human-caused traffic accidents as well as traffic congestion in urban areas. It’s frank about the possibility that this “disruptive” technology—as they refer to it—will lead to fewer jobs for drivers. But the company reasons that since self-driving Ubers will be available 24 hours a day, they’ll need more maintenance than the cars on the road now, which could mean jobs in other areas.

There are a lot of ethical questions surrounding driverless technology as well; a June study in the journal Science studied how a driverless car might handle the moral dilemmas of protecting itself and its passengers versus pedestrians and others on the road. Whether Uber is the company to solve these problems remains to be seen.

But starting today, they’re testing this potentially game-changing technology in Pittsburgh. So yinz better buckle up.