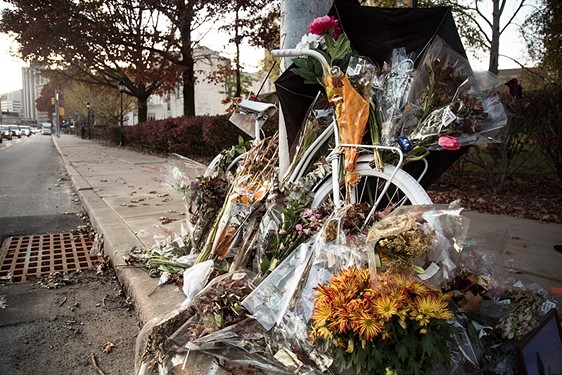 CP photo by Theo Schwarz
A "ghost bike" commemorating the death of cyclist Susan Hicks on Forbes Avenue.
Advocates at Bike Pittsburgh tried for years to get the Pennsylvania Department of Transportation to include bike and pedestrian friendly infrastructure as part of the renovations of West Carson Street in the West End. Those request were denied, and a week after West Carson reopened, cyclist Denis Flanagan was struck and killed by a truck on the newly paved road.

In response, more than 200 bike advocates packed an Aug. 31 PennDOT meeting for new bike design in Oakland, demanding safer street design for bikers and pedestrians on PennDOT projects. Another 200 cyclist road together a week later in tribute to Flanagan and now Bike Pittsburgh is starting an online petition, calling on PennDOT to no longer ignore the request of the bike community and institute safer road design policies.

We are trying to show PennDOT that this is important,” says Mike Carroll of Bike Pittsburgh. “This is important to the whole community. This is not just a squeaky wheel of a few activists behind this effort. … Something needs to be done about West Carson Street; the design by PennDOT, makes it dangerous for people riding a bikes and people walking.”

Bike Pittsburgh director Scott Bricker told City Paper last week that he, along with officials from Pittsburgh Mayor Bill Peduto’s and the office of City Councilor Theresa Kail-Smith, whose district encompasses the section of West Carson in question, had been requesting the inclusion of bike lanes on the West Carson plan since 2011. PennDOT said they could not include the lanes becasue of the width restrictions, but Bricker cries foul since the width of the lanes are 14 feet (the standard width for interstate highway lanes is 12 feet).

“If you believe design dictates behavior, then 14 feet means you are on a super highway,” said Bricker. “If you are on a road designed like that, people will go the speed designed.”

Carroll says the petition has almost 1000 signatures. “I hope this shows the level of community support, and that connectivity matters,” he says. “I hope they take the message, that we want the same level of planning they put towards car transportation.”

Carroll says Bike Pittsburgh will keep the petition up for the next couple weeks and then will be and sending them to PennDOT. If you want to sign the petition, follow the link.