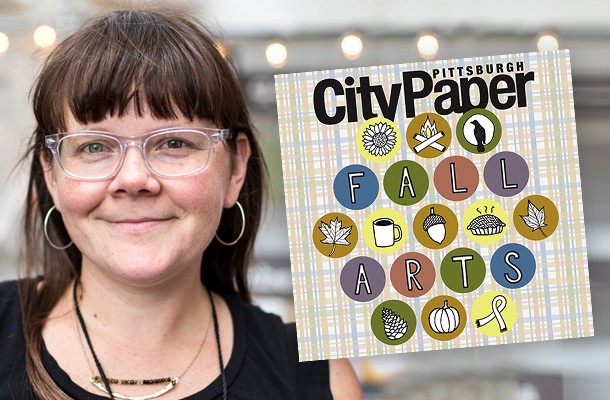 Photo courtesy of Matt Dayak
Amy Garbark and her Fall Arts Preview cover
Amy Garbark is the solo force behind garbella, a popular local shop of goods and gear that she draws, designs and screenprints herself. Her “I [bike] PGH” and “P is for pierogi” shirts have been on Pittsburgh gift lists for years: She was crowned “Best Pittsburgh Crafter” in City Paper’s 2012 Best of Pittsburgh Issue and we featured her “Dear Pittsburgh, I love you” T-shirts as one of our personal must-haves in our Stuff We Like [] column in 2015.

Amy grew up in Pittsburgh and lives in Lawrenceville’s 6th Ward with her husband, Steevo, and their newly adopted dog, Cinder. In addition to working in her shop and exhibiting her designs at retail shows across the United States, she also plays drums and sings for local band Reign Check and has mentored young artists at Girls Rock! Pittsburgh, a local rock camp empowering girls through music. We caught up with her over email after she was finished with this week’s Fall Arts cover illustrations to get her thoughts on Pittsburgh’s art scene and owning her own business.


You seem to travel a lot for work. What's your favorite thing about Pittsburgh’s art scene that tops other cities you’ve been to?
I love the sense of community and camaraderie among artists, makers and designers in Pittsburgh. I have had lots of people in other cities tell me that they are envious of our Pittsburgh scene because there seems to be more collaboration than competition.

When did you figure out you wanted to be an artist?
Hmmmm … I can’t pinpoint one specific moment that I decided to be an artist. I have always liked making art, as far back as I can remember. I had fantastic art teachers in high school who encouraged me to pursue it. I went to school for art at Alfred University, but it was a bit of a journey to get where I am today. Shoe store, office job, back to school to get art-teacher certification, arts-based youth programming nonprofit, to quitting my full-time job six years ago to pursue garbella full time.

What’s it like being your own boss?
It’s the best! It’s great to be able to determine the structure of your day and environment of your workspace. However, with this awesomeness, also come some challenges. That being said, I’ll take the challenges of being my own boss over any other option.

What’s your biggest selling item in your shop?
Hands down: the “P is for pierogi” baby one-piece.

What’s your personal favorite?
The Always Be Snackin’ design is probably my favorite because it’s pretty much been my motto since I was a tiny kid.

You introduce new designs pretty frequently. Is it hard coming up with new ideas?
Sometimes! I prefer to just create and release new designs when I have an idea and feel like putting it out there. However, when I feel pressure to release a new collection, then it can sometimes be a little challenging for me.

I saw you recently were one of the featured sellers in Etsy’s Open Call event where you got to pitch your products to big-name buyers like Macy’s and Whole Foods. That’s so cool! Was it super intimidating?
Thanks! Yeah, I’m really grateful and honored to have been chosen as a finalist and really appreciate the opportunity. At first, the thought of pitching to the huge retailers felt a bit overwhelming and intimidating. However, when you really get down to it, they’re human and relatable, and I know my business and products better than anyone, so who better to pitch to them, right? 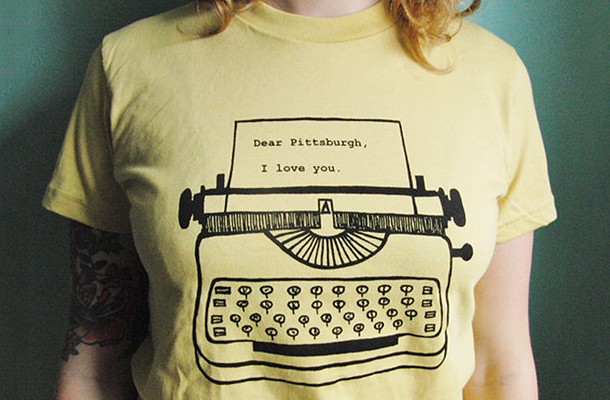 Photo courtesy of Matt Dayak
We featured garbella's "Dear Pittsburgh, I love you" t-shirt in our Stuff We Like section in 2015
Where can folks buy your merchandise in Pittsburgh?
Wildcard, Brambler Boutique, The Picket Fence, Robin’s Nest, West Elm, and So Me in Glenshaw. Also, you can order from my online shop [http://garbelladesign.com/shop] and pick up at my studio, or come to one of our studio open-house sales, or at various craft shows and markets each year, like Handmade Arcade, I Made It! For the Holidays and Three Rivers Arts Festival.

In addition to art, you’re involved in the local music scene too, from drumming in a local band to mentoring young female artists in the Girls Rock band camp. What kind of music do you listen to when you work?
I listen to lots of different music and podcasts and sometimes audiobooks too. For music, I am always listening to a variety of genres and like to check out some new stuff, but ’90s indie rock still gets played in pretty heavy rotation.

I love the support and courage that Girls Rock provides young girls looking for female role models.
I agree. The Girls Rock PIttsburgh! Camp is one of my favorite times of the year! It’s completely volunteer run by an incredible group of women with diverse talents and skill sets, and the campers are incredible.

Did you have any female artists or musicians you looked up to when you were a kid?
Yes! The first album I remember really, really connecting with was Sinead O’Connor’s I Do Not Want What I Haven’t Got, which came out on my 11th birthday. I have two older siblings, so they both also introduced me to a lot of new music from there. My brother played in bands and went to a lot of shows and let me start tagging along to shows when I was 12 and 13. Seeing women play in bands like Jawbox, Superchunk, Velocity Girl and Tsunami had a lasting effect on me and was an important part of my formative early-teenage years.

Your cover illustrations this week include lots of cute fall icons. What’s your favorite season?
Is it a cop-out to say I love all of the seasons? I really do! I love the variety of four seasons: the long days of summer, the cooler crunchy-leaf days of fall, the hopefulness of spring and the crisp air of winter with a side of cozy. However, if I have to rank them, then: summer, fall, spring and winter.

Do you have any projects coming up people should look out for?
I’ll be participating in the Lawrenceville Artist Studio Tour on Nov. 19, so stop by if you want to check out my workspace and pull a print!