City Government Policing Keeping Up With the Council 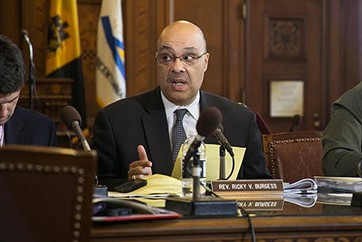 "If you've been reading the papers, there have been several homicides solved and more prevented as a result of this technology," said District 9 Councilor Ricky Burgess, who originally sponsored legislation to implement the system in his district.. "It actually both saves lives and reduces crime."

According to Heath Johnson, a crime analyst with the police bureau who spoke at the Feb. 3 council meeting, 86 percent of shots-fired incidents would have been missed if the ShotSpotter system wasn't in place. He also said there were 13 arrests in 2015 that came as a result of ShotSpotter alerts.

"There have been a number of incidents where police have arrived on the scene and found someone who was critically injured and [they] were able to get EMS," said Johnson.  "By doing so, it has probably reduced the homicide rate, because those individuals very well could've been DOAs if we'd had a slower response to those incidents."

There were 20 homicides in Zone 5 in 2015, according to Johnson. Ten of the homicides occurred within the ShotSpotter coverage area, and 10 were outside of the area. The homicide clearance rate within the area was 40 percent compared to only 10 percent for homicides outside of it.

"These positive outcomes are extraordinary, especially in a police bureau that has been struggling with getting officers deployed and just having enough manpower on hand. This has been a critical tool in doing that, and it seems an effective use of government resources to fight crime and respond to victims," said Johnson. "It assists in data-driven proactive policing in high-violence areas, which is a stated goal of our chief. I would recommend that ShotSpotter continue to be funded and, if even to be so bold, to expand that coverage area in the future."

The majority of council members voiced support for the ShotSpotter system, and some expressed hope that the system coverage area would eventually be expanded to neighborhoods in their district.

"The more tools we have, the better we are," said Councilor Darlene Harris. "Just listening to the news and the radio this morning, [there] was another shooting in Homewood [and] the ShotSpotter caught it. I'm glad it's a success and hope to see it on the North Side real soon because that was the plan."

City council did not discuss when or if the system would be implemented elsewhere.