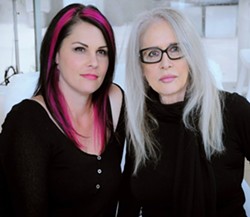 Spheeris and her daughter, Anna Fox, are touring in support of the newly released DVD box set (The Decline of Western Civilization Parts I, II and III), and will be stopping by the Hollywood Theater, in Dormont, on Fri., Nov. 6. Tickets are $12 for the double feature.

Doors open at 7 p.m. Spheeris will sign posters, with proceeds going to charities. Decline I screens at 8 p.m., to be followed by an audience Q&A led by City Paper's oldest staffer (and spectator in the contemporaneous NoCal punk scene) Al Hoff. Decline III screens after the Q&A.

And don't miss Part II: The Metal Years, which screens on Saturday night. See CP's write-ups on the films, below, and check out the interview with Spheeris and Fox in this week's CP.

THE DECLINE OF WESTERN CIVILIZATION and THE DECLINE OF WESTERN CIVILIZATION PART III. The Los Angeles punk-rock scene circa 1979-80 is the focus of Penelope Spheeris’ influential 1981 documentary. Decline captures the mix of loud fast music, political anger, DIY styling and beer, profiling bands such as Black Flag, Circle Jerks, Germs and X. In the time before widespread media about everything, Decline was a critical primer about punk — whether for kids who yearned to be in a similar scene, or the adults who freaked out about it. In 1998, Spheeris made the follow-up Part III, which profiled a later generation of L.A. punks — many of them street kids, who find community and meaning in the ongoing music scene. Some things don’t change: Everybody still hates cops and loves beer.

THE DECLINE OF WESTERN CIVILIZATION PART II: THE METAL YEARS. This 1988 doc from Penelope Spheeris hits the Sunset Strip in search of metal. Interviews include: the bands that made it (Poison); the progenitors, like Ozzy and Alice Cooper; and those hairsprayed, spandex-ed hopefuls who toil in a sea of show-flyer litter looking for the big break. If “decline” can be defined by cheap sex, loud music and prodigious partying, then the end is indeed near. But this film is the funniest of Spheeris’ Decline trilogy, with the Los Angeles metal scene hewing closer to a noisy, self-aware carnival than any angry rebellion. 8 p.m. Sat., Nov. 7. Hollywood

A conversation with Doug Paisley